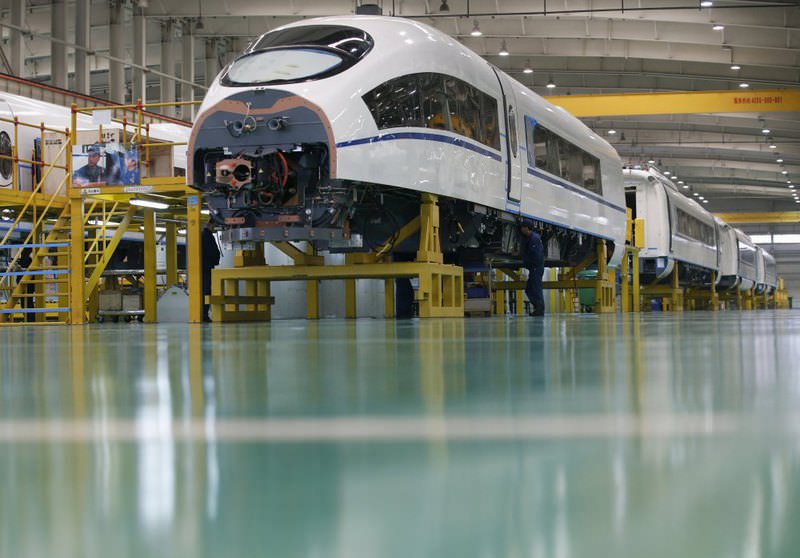 An employee works on a high speed train model CRH380B at a final assembly line of China CNR's Tangshan Railway Vehicle's factory in Tangshan, Hebei province.
by Sep 19, 2015 12:00 am

The deal is the latest in a series of deeper U.S.-China business ties to be unveiled before President Xi Jinping visits the United States next week. Computer maker Dell will also invest $125 billion in China

A unit of China's CRRC Corp, the world's biggest train maker by revenue, on Thursday joined a group of its domestic peers in agreeing a deal to help build a high-speed link from Las Vegas to Los Angeles, underlining the rail giant's lofty overseas ambitions.

Announced in a joint statement by the Chinese firms and U.S. partner XpressWest at a government forum in Beijing, the deal is the latest in a series of deeper Sino-American business ties to be unveiled before President Xi Jinping visits the United States next week. Computer maker Dell Inc said it will invest $125 billion in China, and new bilateral investment treaty offers have been exchanged.

CRRC, formed from a state-driven merger of China's two largest train makers, is among a large group of the country's rail firms that has inked an accord for the project with XpressWest, a venture set up by Las Vegas-based hotel and casino developer Marnell Companies.

Gary Wong, a Hong Kong-based analyst at brokerage Guotai Junan, estimated that the project could be worth $5 billion. He said that although it would likely offer the many Chinese firms involved little financial benefit, it was significant for their long-term goals.

"If this opens up the U.S. market for them, opportunities for future expansion will increase. And if (their technology) is used in the United States, it will be easier for them to sell to other countries," he said. CRRC is leading China's aggressive pursuit of overseas high-speed rail deals in competition with traditional suppliers such as Germany's Siemens AG and France's Alstom SA.

Beijing recently clinched contracts in Russia, although it has faced hurdles in Mexico and Indonesia due to bureaucratic flip-flops in those countries.

The United States is a key target for China's rail industry, even though policymakers have been split over the need for high-speed rail and some have taken a dim view of Chinese involvement in potentially strategic deals. Most of a dozen or so U.S. projects lined up have struggled to gain traction, leaving the country far behind Europe and Asia in this area.

XpressWest won the green light for the 230-mile high-speed line linking Los Angeles to Las Vegas in 2011 and applied for a federal loan in 2010, according to the company's website. XpressWest and the Chinese firms said in their statement that the accord would help accelerate the project without disclosing details of how it would achieve that. Additional regulatory approvals will be required before the construction begins, expected early as September 2016.

"The United States market is huge because the fact is that their railway tracks and facilities are ageing and need upgrading," Cao Gangcai, CRRC's vice chief economist, told Reuters in an interview on Wednesday, before the XpressWest deal was announced.

The company plans to grow its share of revenue from work overseas to 30 percent within the next five years, he said. Having completed its merger in May, it booked first-half revenue of 91.8 billion yuan ($14.42 billion), only 12 percent of which was booked overseas.

"We want to attain the position we deserve in the global market...There is no other company on earth that is able to simultaneously research and produce high-speed trains, electric multiple units, subways," he said.