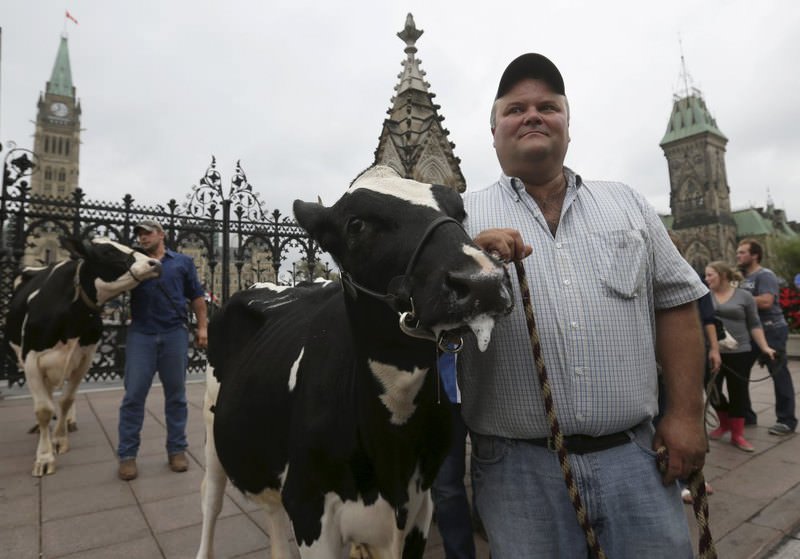 Dairy farmers stand with their cows during a protest against the Trans-Pacific Partnership trade agreement in front of Parliament Hill in Ottawa, Canada on Tuesday.
by Anadolu Agency Oct 01, 2015 12:00 am

The biggest trade agreement since the 1980s, the Trans-Pacific Partnership, is set to be signed after five years of negotiations between the U.S. and 11 other countries whose combined GDP accounts for 40 percent of the world's GDP

The Trans-Pacific Partnership (TPP), a trade agreement between the U.S. and 11 countries representing 40 percent of global gross domestic product (GDP), faces its final hurdle at a meeting in Atlanta, GA. The meeting began yesterday and will last until today.

If trade ministers agree to the final terms at the meeting, the deal would be the biggest such agreement since the 1980s, include 30 percent of global exports and 25 percent of global imports, according to a note published by the Brookings Institution on Sunday.

The nations involved, Japan, Canada, Mexico, Chile, Peru, Australia, New Zealand, Singapore, Brunei, Vietnam and Malaysia, along with the U.S., have been negotiating for more than five years, with a large part of the agreement remaining undisclosed. As a result, the TPP has been heavily criticized by transparency groups, such as the Electronic Frontier Foundation (EFF), and activists who assert the secrecy of the deal's proceedings and hidden text challenge local laws, reduce the regulation of multinational corporations and violate Internet privacy rights.

But analysts forecast significant benefits should the deal go through. "Once completed, the TPP will be an open platform that other countries in the Asia-Pacific Economic Cooperation forum can join, and the United States intends for the TPP to fulfill the goal of becoming a free-trade agreement for the Asia-Pacific region. South Korea, the Philippines, Thailand, and Taiwan have already indicated their interest in joining the TPP once it is concluded," Brookings analyst Joshua P. Meltzer said.

According to Meltzer, there are plausible estimates of what benefits an agreement would likely yield. "In this kind of trade agreement, the big absolute gains go to large economies, especially ones that still have significant protection. Thus, the U.S. stands to gain $77 billion annually, while Japan's benefit is an even larger $105 billion. The big winner relative to the size of its economy is Vietnam, which could gain more than 10 percent of GDP, followed closely by Malaysia, gaining about 6 percent," he said.

Harvard Law School Assistant Professor Mark Wu sees larger advantages to the TPP. "Essentially what we're seeing is a move away from a world with a standardized set of rules that apply across the board to one which is now fragmenting into multiple nonexclusive trading arrangements, each with its own set of additional rules," Wu said in an interview with Harvard Law Today on Sept. 14. "It's not the case that the original rules disappear, but the world becomes much more complex when you have to deal with multiple sets of additional rules, such as the TPP. By its sheer size, the TPP will change the way we think about how trade is governed," he added.

But there are still issues to be resolved regarding the dairy sector, automobiles and intellectual property, according to Mike Petersen, New Zealand's special envoy, who is representing his country in the talks. "The deal was 98 percent done," Petersen told the New Zealand newspaper Waikato Times on Aug. 15. "The agreement would need to see much more in the dairy deal to make it something we can accept," Petersen said, citing concerns about the New Zealand dairy sector's access to markets in the U.S., Canada and Japan.

Then the American Automotive Policy Council (AAPC) trade organization expressed concerns about the use of currency manipulation to bar market access to U.S. carmakers in a number of countries. "While [the] AAPC has supported every past U.S. FTA [Free Trade Agreement], it is seeking as a top priority a TPP that includes strong and enforceable currency disciplines in the agreement. Several countries in the TPP negotiations have a history of using currency manipulation to gain an unfair trade advantage over their trade partners, which would undermine the expected benefits of a TPP agreement to the United States," the council said in a statement on its website.

And, many experts argue that the intellectual property (IP) provisions of the treaty are too restrictive. "The TPP contains a chapter on intellectual property covering copyright, trademarks and patents. Since the draft text of the agreement has never been officially released to the public, we know from leaked documents that U.S. negotiators are pushing for the adoption of copyright measures far more restrictive than currently required by international treaties. The leaked U.S. IP chapter includes many detailed requirements that are more restrictive than current international standards, and would require significant changes to other countries' copyright laws," warned the EFF in a note on its website.

Should the TPP fail to be approved at the conference in Atlanta, analysts say it might not ever see the light of day. On the other hand, many observers think it is too close to completion now to fail. "A good trade deal should generate positive gains in all countries. But it's important that these gains are broadly distributed and that governments not neglect the constituencies that will stand to lose," Wu stressed.
RELATED TOPICS