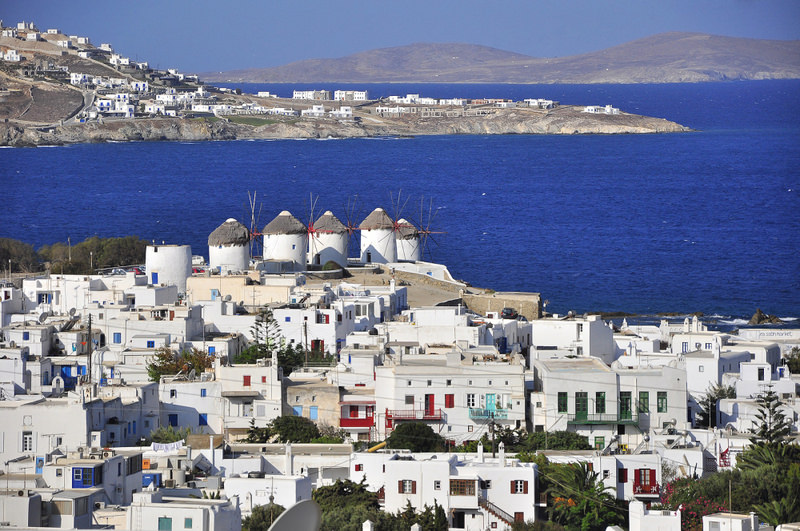 As part of the third bailout agreement with international creditors, the VAT discount offered to Greece's six islands with high tourism potential expired on Thursday, which is expected to lower locals' purchasing power

It doesn't have the glitz and glamour of nearby Mykonos, nor Rhodes' steady stream of European charter flights disgorging package tourists. The island of Naxos, with its inland verdant mountains and kilometers of sandy beaches, is considered more a quiet family holiday destination as well as a producer of top agricultural products, including its famed cheese.

Now it is among six Greek islands that are seeing sales tax increase by 30 percent on Thursday one of a series of creditor-demanded reforms in return for Greece's third international bailout. And locals fear it could hammer their fragile tourism and agricultural industry.

"The VAT increase will definitely have an effect. On the permanent residents initially, and in particular on the pensioners and salaried employees whose purchasing power will be reduced," said Naxos Deputy Mayor Dimitris Lianos. "Of course it will also negatively affect tourism, livestock farming and agricultural production" and inhibit investment on the island. For decades, Greece's Aegean islands many of them very small and remote had enjoyed a value added tax rate 30 percent lower than the rest of the country, in an effort to offset increased transportation costs and prevent their dwindling permanent populations from deserting them altogether. Now, with Greece's economy hammered by a financial crisis since 2010 and the country under strict supervision by its European creditors, successive governments have been forced to introduce economic reforms including the abolition of the VAT tax break.

Naxos, Mykonos, Santorini, Rhodes, Paros and Skiathos are the first to lose the benefit. The rest of the more than 100 inhabited Aegean islands will follow in two waves, on June 1, 2016 and January 1, 2017. Consumer taxes for the vast majority of goods goes from 16 percent to 23 percent, while other goods and services such as hotel rooms jump from 5 percent to 13 percent.

"We work for three months in the summer, so for the rest of the time when it's just the locals here, it will definitely affect our turnover, our consumption," said Vaggelis Koutelieris, who owns five supermarkets on Naxos. "This will be a negative for every business." Vaggelis Katsaras, who owns a 23-room beachside hotel near a popular windsurfing area and is also the vice president of Naxos' hoteliers association, called the VAT increase "a catastrophe." Hoteliers are thinking of splitting the increase between the consumers and the hotel owners to cushion the blow for clients, he explained, but it is still unclear how it might affect next year's tourism season.

"We're all working to earn money that is only enough for us to pay our obligations," Katsaras said, noting all taxes have skyrocketed and people will now be forced to pre-pay the following year's income tax too. However, the tourists who were on the island Thursday a windswept day at the end of the season appeared generally unperturbed by the imminent change.

Yes, prices will probably go up, said French tourist Marie-Christine Ledernez, visiting from Brittany, "but also it brings the whole country on the same level in a way... Perhaps it's also up to us, the clients, to pay too," she said. Tourism and shipping are Greece's largest industries, and the left-wing government, newly re-elected in September after a politically tumultuous initial seven-month term, has made no secret of its own disagreement with the measure.

"It is clear that this development is a political necessity, and not a choice, for the government, arising from the (bailout) agreement," the Finance Ministry said Monday. It promised to review the VAT increase next year if it receives more income than expected from a tax evasion crackdown. But for now, islanders have little choice but to implement the increase.

Makers of Naxos' famed hard, salty cheese named graviera, which has earned the European Union's coveted "protected designation of origin" label and is also exported to Germany, France and the Emirates, fret sales will suffer. Production costs will increase as prices shoot up, explained cheese producer Yiannis Dimitrokalis, who balked at the prospect of passing the hike on to consumers.

"If you increase your prices, you won't be able to sell," said Dimitrokalis as a team of creamery workers behind him pressed curd into a cheesecloth-lined mold for the next batch of graviera. "The consumer won't be able to buy it. So there will be the problem of products being left, not being used and being thrown away. We're between a rock and a hard place."

Farmers say the tax increase on animal feed could make them cull some of their livestock. "If this continues, gradually we'll reduce our animals too," said farmer Pavlos Nafpliotis, whose small inland farm includes more than a dozen milk cows as well as sheep, geese and hens.

Naxos, locals insisted, had not originally been on the list of the first wave of islands to see the measure implemented, leaving consumers confused and businesses scrambling to get their cash registers upgraded.

Some just couldn't make it in time. "I will have to use a receipt booklet until I can take the machine to get it fixed," said Ioanna Vassilaki, whose family-run taverna in the mountain village of Filoti relies on the villagers mostly farmers and construction workers as well as tourists enjoying nearby hiking trails. The VAT increase made her despair. "I'm going to have to raise the prices," she said. "But can the customers afford to pay?"