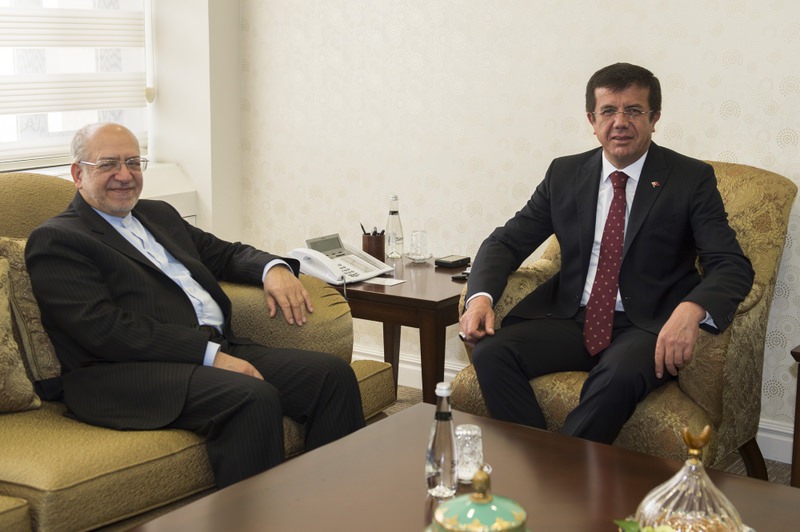 Meeting with his Iranian counterpart in Ankara on Thursday, Interim Economy Minister Zeybekci said that Turkey and Iran are renegotiating how to turn their preferential trade deal into a free trade agreement

Economy Minister Nihat Zeybekci has said the main objective of Turkey and Iran is to head toward free trade in all fields, including agricultural products, services, industrial products and public procurements.

Zeybekci met with Iranian Minister of Industry, Mine and Trade Mohammad Reza Nematzadeh and his entourage at the Economy Ministry headquarters. In response to a question about the trade volume between the two countries, Zeybekci said a fall in energy and raw material prices has brought Turkey's imports from Iran down by 35 percent, adding that apart from these items, commodity trade between the two countries follows a positive trend. Zeybekci said Iran's exports to Turkey increased by 9 percent, and Turkey's exports to the country soared by 18 percent in the first eight months of the year. In terms of commodity trade alone, the bilateral trade rose by around 10 percent in this period, he said.

According to Zeybekci, the two leaders revised the Preferential Trade Agreement, which has been in force since Jan. 1, 2015, to increase both sides' product groups from 15 to 30 by the end of the year. Pointing out that one of the primary objectives is to boost mutual investments, Zeybekci said that with the removal of embargoes and obstacles, the two countries will soon start to progress hand in hand in the global trade and economy platforms.

Nematzadeh said European firms are willing to invest in Iran since the removal of embargoes and invited Turkish firms to invest in the country, particularly in the field of energy. Underlining that Turkey and Iran have similar futures and wishes, Nematzadeh stated the two countries are making efforts to reach a foreign trade volume of $30 billion and will strive to open the way for business people and industrialists. Referring to the fact that Iran successfully finalized nuclear negotiations, Nematzadeh noted all embargoes will be eliminated in the very near future and Iran will continue to make progress in the economic field in a stronger and more resolute manner.

Nematzadeh also stated Iran has various projects in a number of fields, including energy and transportation, adding up to $30 billion and seeks permanent and longer-term strategic cooperation with Turkey in such fields. Turkey and Iran can make joint investments in the areas of industry, mining, trade and tourism, Nematzadeh said, continuing that the two countries have the potential to cooperate in the automotive industry as well. He invited international investors to a forum to be organized by the Ministry of Roads in the upcoming days.

According to Nematzadeh, Iran has prepared a 10-year strategic plan in the fields of industry, mining and trade, which will be a guide for investors. Also, Iran has made a list that encapsulates 300 topics regarding priorities and will offer it to Zeybekci. Nematzadeh ended his speech by extending thanks to Turkey for not leaving Iran alone during the years when embargoes were placed on the country.