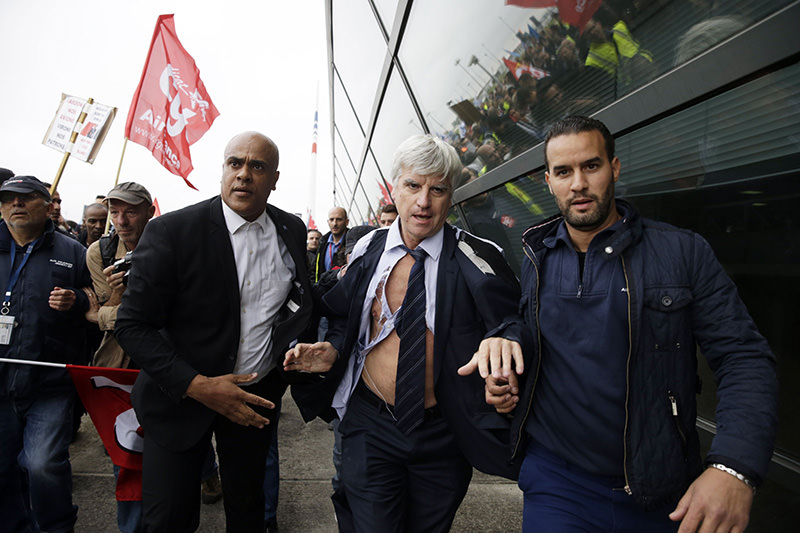 by Oct 05, 2015 12:00 am
Air France managers fled a meeting on Monday about mass job cuts after angry staff waving banners and flags stormed the room, according to Reuters journalists at the scene.

Television images showed airline human resources and labour relations chief Xavier Broseta being jostled, his shirt ripped off and his tie hanging from his neck, battling his way through crowds of workers as he sought to escape.

Broseta and Air France Chief Executive Frederic Gagey had been outlining a drastic cost cutting plan, described by the company as "Plan B" after failing to persuade its pilots to accept a less radical one.

Violent protests by workers are commonplace in France, where the population has a long tradition of taking the law into its own hands. This year, as the country struggles to come out of an economic downturn, has seen many.

Traffic disruption, damage to public property and injuries to police officers have gone hand-in-hand with a spate of demonstrations by farmers, taxi drivers, ferry workers and even tobacconists.

Air France CEO Gagey had already left the room before the works council meeting near Charles de Gaulle airport north of Paris was interrupted after about an hour.

Parent Air France-KLM said it planned to take legal action over "aggravated violence" carried out against its managers.

"This violence was carried out by particularly violent, isolated individuals, whereas the protest by striking personnel was taking place calmly up until then," a spokesman said.

Air France confirmed in the meeting, which will not resume on Monday, that it planned to cut 2,900 jobs by 2017 and shed 14 aircraft from its long-haul fleet, two union sources said.

The cuts include 1,700 ground staff, 900 cabin crew and 300 pilots, the sources said. The long-haul business would be reduced by 10 percent.

The French airline also wants to cancel its order for Boeing 787 Dreamliner aircraft, the sources added. Air France-KLM has 19 787-9 and six 787-10 jets on order.

Industry sources said Boeing would be keen to keep the order on its books, possibly by agreeing to defer delivery.

Air France-KLM is seeking to cope with growing competition. It has been at loggerheads with its main pilots union, the SNPL, over its plans.

Europe's big three flag carriers, which also include British Airways owner IAG and Germany's Lufthansa, have been squeezed between low-cost competition inside Europe and fast-expanding long-haul airlines in the Gulf, as well as Turkish Airlines (THY).

Turkish Airlines is set to become the largest carrier on routes to and from Europe by the end of this year, ahead of British Airways, aircraft financiers gathered in Prague were told on Monday. Dubai's Emirates would be in third place.

Lufthansa, which is also battling with union opposition to cost-cutting, has managed to push forward plans for a revamped low-cost unit, Eurowings.