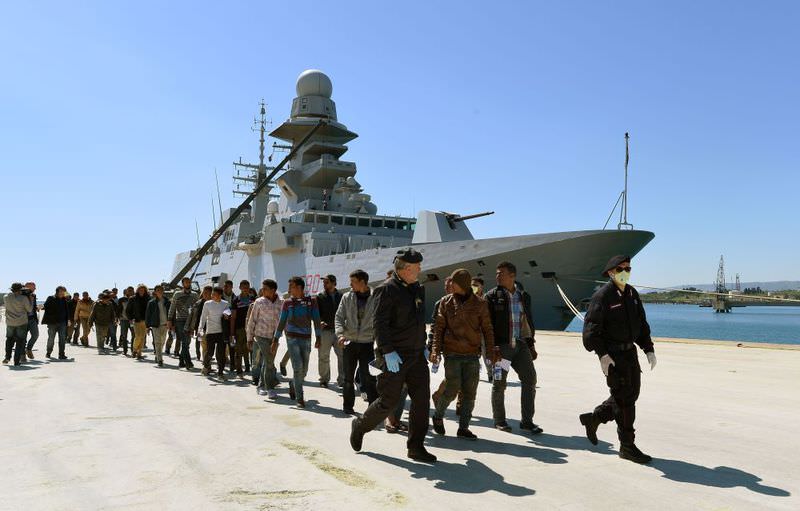 Rescued migrants walk along the quayside after disembarking from the Italian Naval vessel Bettica as they arrive in the Sicilian harbor of Augusta.
by reuters
Oct 05, 2015 12:00 am

Freight traffic through Serbia was severely disrupted when Hungary and Croatia closed their borders to cope with tens of thousands of migrants, with drivers spending days waiting on the borders

Border closures and tighter controls caused by record numbers of migrants are clogging up trade in Southeast and Central Europe, driving up costs and forcing transport companies to seek other routes.

Freight traffic through Serbia was severely disrupted when Hungary and Croatia closed their borders last month to cope with tens of thousands of migrants mostly bound for richer nations further north.

The clampdown hit not just Serbian and Croatian trucks, but also cargo in transit from other countries to the south, including Macedonia, Turkey, Greece and Bulgaria.

But last week he spent almost three days at the border between Serbia and Croatia. His company may have to pay a penalty for not delivering on time:

"Who is going to pay for that?"

When Leamis entered Serbia he was given papers to cross to Croatia and then continue to Germany. But as he drove north, Croatia closed its border with Serbia as well and he spent three days sleeping in his truck.

Complicated customs procedures due to the fact that Serbia is still outside the EU are further delaying transit through the country, where transport accounts for 15 percent of the economy and employs more than 11 percent of the workforce.

Arpad Vasarhelyi, chief executive of the Hungarian unit of logistics company DB Schenker, said routes through Serbia and to the Balkans were in a "critical" state, with the crisis slowing both road and rail deliveries.

"Certain traffic has been diverted to alternative routes, which can be more expensive," he said, adding that some clients had cancelled orders when road traffic stopped at the borders.

Rail Cargo Hungaria, a member of Austrian Rail Cargo Group, said the closure of the crossing at Magyarboly on the Croatian border meant it had to reroute some trains to another point at Murakeresztur, 200 kilometers northwest.

"As the situation is not expected to ease in the coming days and weeks, certain restrictions might become necessary in rail cargo traffic, for example as a result of the government's measures, or if migrants should walk onto the tracks," it said.

The crisis has also spilled over into the border-free Schengen Zone, where Germany, Austria and Slovenia have imposed temporary border controls due to the migrant influx.

"In case of Northern and Western European regions we use Czech and Slovak transit, while in case of certain South European destinations we opt for Slovenian transit to avoid longer waiting periods," it said.

Foreign Minister Peter Szijjarto has said Hungary, a transport hub where logistics accounts for 6 percent of gross domestic product (GDP), could lose billions of euros if Schengen, a cornerstone of European integration, were to crumble.

Car makers dependent on timely deliveries could be among the hardest hit, with the Volkswagen emissions scandal already casting a pall over a sector accounting for over a tenth of Hungarian exports.

A spokeswoman for Mercedes, which has a 1 billion euro factory in central Hungary, said the plant was running normally, but the company was monitoring developments and was in continuous contact with its partners.

German rival Audi did not respond to a request for comment.

"The Hungarian economy is very dependent on industrial production, which is dominated by the automotive industry, primarily European brands," Erste Bank analysts said in a note.

"Thus, if border checkpoints were to be restored, additional transportation time might hinder local production and weigh on Hungarian GDP growth," Erste said.

A Hungarian logistics body said its members have reported significant waiting times at the Hungarian-Austrian and Austrian-German borders, with trucks stranded for between eight and 24 hours.

"There were 7-kilometer to 20- kilometer lines at Passau in recent days because cars and trucks were let through in a single lane only," said Zoltan Door, head of the Hungarian Logistics Association.

He said longer waiting times hit perishable goods the worst, and delays and reroutes were pushing up costs of refrigeration, fuel, road tolls and drivers' wages.

"It is hard to predict what will happen as no one was prepared for a flow of migrants on this scale," Door said. "I hope there will be a common solution outside Europe. If they do this, then Schengen will not be at risk. If not, it will be."