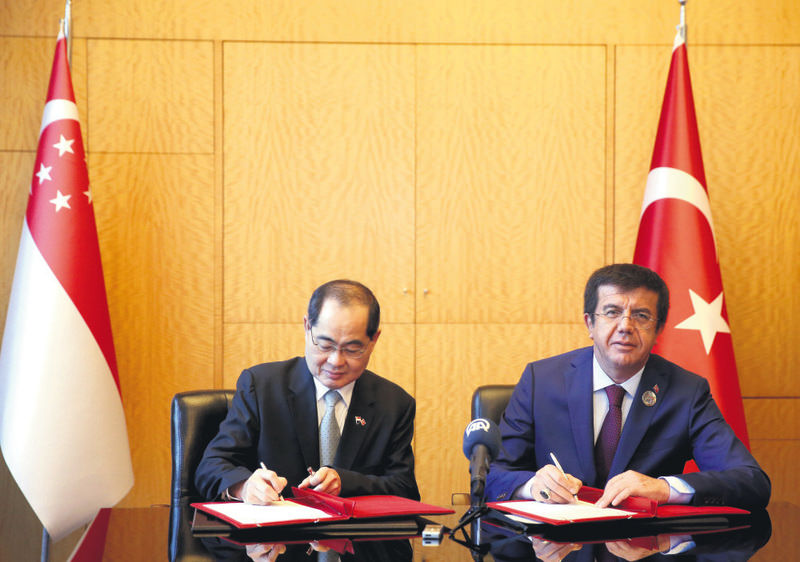 by Daily Sabah Oct 07, 2015 12:00 am
A joint declaration will be signed between Turkey and Singapore after negotiations over a free trade agreement (FTA) are finalized.

Interim Economy Minister Nihat Zeybekci said Singapore will become the cornerstone of the Asia-Pacific region for Turkey and Turkey is determined to benefit from all advantages Singapore offers for Turkish companies and exporters with its close to 6 million population. Singapore's Minister of Trade and Commerce, Lim Hng Kiang, also stressed that the two countries have decided to improve bilateral economic relations and Singapore will act like as a gateway to Southeastern Asia for Turkish firms.

Zeybekci and Kiang held a closed-door meeting at the G20 trade ministers meeting held in Istanbul's Conrad Hotel. After the meeting, which lasted about half-an-hour, it was announced that the FTA negotiations that had started in June 2014 have been completed and a joint declaration will be signed at the G20 Leaders' Summit, which will take place in Antalya in November.

Zeybekci said the negotiations took one-and-a-half years for the FTA to include almost all sectors and that this is the first time such a comprehensive FTA is being signed between two countries. He also announced that they will be introducing the content of this agreement to all sectors in Turkey as well as the business world, and that in the first half of 2016, representatives from various sectors from both countries will be introduced to each other. "This agreement does not only aim to increase the trade between the two countries, but for both countries to mutually benefit from the advantages they have to offer," Zeybekci added.

Kiang thanked Zeybekci for the FTA preparations and added that while Singapore will serve as a cornerstone for Turkish firms in the region, Turkey will act as a gateway to Europe, Central Asia, North Africa and the Middle East for Singaporean firms. "Turkey has a strategic position and a dynamic economy, plus it is a member of the G20. Singaporean and Turkish firms are now ready to fully benefit from the advantages this FTA will offer," Kiang said.
RELATED TOPICS