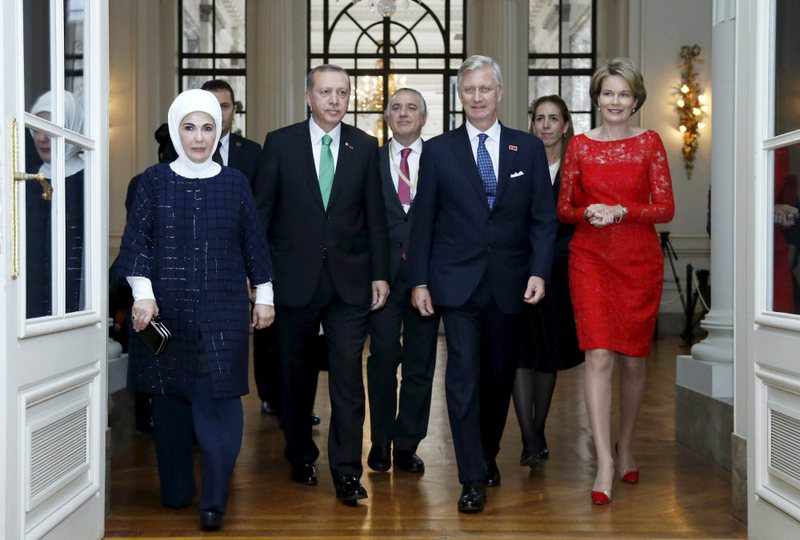 Erdoğan visited Belgium where he stressed the importance of strong historic relations with Belgium as well as their collaboration to bring about prosperity, peace and stability in Europe and the world

As part of his visit to Brussels in response to Belgian King Philippe's official invitation, President Recep Tayyip Erdoğan attended a high-level business forum jointly organized by the Federation of Enterprises in Belgium (FEB) and the Turkish Investment Support and Promotion Agency (ISPAT). More than 40 companies operating in various sectors, including informatics, banking, energy, engineering, manufacturing and construction, participated in the meeting.

As a guest of honor at the meeting, Erdoğan expressed his satisfaction with coming together with senior executives who have investments in Turkey. Pointing to the fact that Turkish-Belgian relations have continuously improved since the first bilateral diplomatic negotiations were initiated in 1838, Erdoğan said economic and commercial relations have made significant strides ever since.

The president also said Belgian business people's investments in Istanbul date back to the 1840s, and Turkish investments in Belgium continue to increase. Underlining that both countries' entrepreneurs, who search out investment opportunities in both countries, greatly contribute to the improvement of economic and commercial relations, Erdoğan said relations in all areas should be further improved. "We want to work together to achieve prosperity, peace and stability in Europe and the whole world. I believe the Turkish and Belgian governments are sincere about creating favorable conditions for the improvement of our relations by providing the necessary incentives and facilities for our businessmen," Erdoğan said, adding that the current performance will increase further via the support of existing institutions. The president also stressed the importance of mutual high-level talks and that state visits contribute to cementing such relations.

Referring to King Philippe's visit to Turkey in 2012 when he was crown prince, Erdoğan said that visit was very useful in terms of diversifying trade between the two countries, increasing mutual investment opportunities and paving the way for launching joint projects. Touching on the memorandum of understanding that was signed between Turkey and Belgium to establish a joint economic and commercial commission mechanism in 2012, Erdoğan said the implementation of this mechanism will help economic and commercial relations turn into more concrete achievements.

Erdoğan suggested Turkish and Belgian companies should be encouraged to cooperate in Asian and African markets. "To this end, we attach importance to holding the second meeting of the commission next year," he added. In reference to the trade volume that reached $7 billion between the two countries in 2014, Erdoğan said mutual investment should be diversified and increased. Underlining that Belgium has directly invested $8.1 billion into Turkey since 2002 - ranking sixth among countries that made the greatest direct investment in the country - Erdoğan said Turkish-resident investors' direct investment in Belgium has amounted to $300 million since 2002 and there are around 40 Turkish-capitalized firms operating in Belgium.

Stressing that Turkey has become a global center of attraction thanks to its political and economic stability despite all the problems in the region, Erdoğan said the private sector has a large part to play in Turkey's achievement of high growth and international expansion. Turkey's greatest wealth is its people, and the greatest power in the economy is its entrepreneurs, Erdoğan said. He also said continuing structural reforms and advancing economic development are moving toward achieving their goals thanks to bold steps taken by the private sector.

Erdoğan also touched on large investments made to strengthen the country's infrastructure and shared information about work in the field of transportation. He also said major innovations have been made in the education system and a large budget has been allocated to research and development (R&D) spending. Erdoğan stressed that many kinds of support have been given to both Turkish and international entrepreneurs, adding: "Our relevant institutions are always ready to give all kinds of assistance and guidance to Belgian businessmen." Pointing to the necessity of displaying a common attitude to close the gap in global infrastructural investments, Erdoğan said a necessary investment of $70 to $90 trillion will emerge globally over the next 15 years, which will concern developed countries as much as developing ones.

At the conclusion of the meeting, senior executives of leading investment companies expressed their happiness at taking part in the Turkish market and shared information about their investment plans. Tom Debusschere, the CEO of Deceuninck, which specializes in construction and entered the Turkish market by purchasing stakes in Ege Profil in 2002, said the company intends to invest in a new facility with the object of increasing its production capacity in Turkey. "As such, we also aim to better nourish our growing market in Turkey and to export goods to emerging markets," he added.

Yvan de Cock, the executive board member of BNP Paribas Fortis and the former CEO of Fortisbank Turkey, said the bank pays particular attention to its operations in Turkey. BNP Paribas Fortis is a major subsidiary of France's BNP Paribas and took over Fortisbank in Turkey under the umbrella of the Turkish Economy Bank (TEB). He also said TEB plays a major part in the financing of small and medium-sized enterprises (SMEs) and Fortisbank contributes significantly to the development of real sector in Turkey.

Martine Raynaers, the CEO of the world's leading aluminum company, Raynaers, also provided information about the company's investment plans. He emphasized that Turkey offers major opportunities for investors. Raynaers opened an office in Turkey in 1990 and aims to enter other markets in the region, including Azerbaijan and Iran, through a facility that it plans to establish in Çerkezköy in Turkey's northwestern Marmara region in the near future.