The world eyes reaching $100B for climate fund 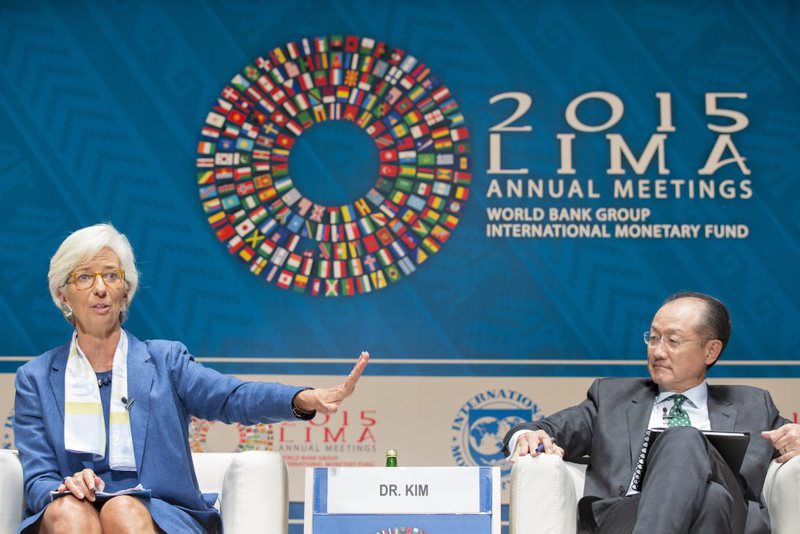 by French Press Agency - AFP
Oct 10, 2015 12:00 am
The movers and shakers of the world economy are trying to close in on the magic number of $100 billion a year to fight climate change as they meet this week in Peru. But with the world well shy of that target, everyone seems to think the rest of the money should come from somewhere else.

The global talks on fighting climate change have stumbled over the issue of getting money to the countries that are most vulnerable to global warming and often least responsible for causing it. Wealthy nations have pledged to come up with $100 billion a year by 2020, but with two months to go to clutch United Nations climate talks, a new report this week found the world is less than two-thirds of the way there.

French Finance Minister Michel Sapin, whose country will host the December talks, said Thursday that governments have given pretty much all they can, and called on institutions like the World Bank and European Investment Bank to step up. "That will be decisive because they haven't done a lot," he told journalists on the sidelines of the International Monetary Fund (IMF) and World Bank annual meetings, which gathered finance ministers and central bank chiefs from 188 countries.

"If we want the Paris conference to be a success, the question of funding has to be nine-tenths settled, if not 100 percent," Sapin said.

On Wednesday, U.S. Secretary of State John Kerry also singled out the World Bank and company at the Peru meetings, saying: "The United States looks to the multilateral development banks to set ambitious targets for scaling up mitigation and adaptation finance."

The Organisation for Economic Co-operation and Development (OECD) calculated this week that wealthy countries came up with $61.8 billion in climate funding last year, including $23.1 billion in bilateral deals between countries, $20.4 billion from multilateral institutions and $16.7 billion from the private sector.

But while development banks could indeed do more, governments should not be let off the hook, climate experts say. "Multilateral institutions can do more, but countries must also do more," said U.N. Secretary-General Ban Ki-moon's point man on climate change, Under-Secretary-General Janos Pasztor. International charity Oxfam's climate policy expert Isabel Kreisler echoed that view, saying: "Both the multilateral banks and governments should pay more."

Responding to such appeals, the Inter-American Development Bank pledged Thursday to increase climate finance from about 14 percent of lending to between 25 and 30 percent by 2020. And the Asian Development Bank announced last month it would increase climate finance from $3 billion to $6 billion, directing 30 percent of its lending toward green projects. Meanwhile, Pierre Moscovici, the European commissioner for economic and financial affairs, said he would pile "positive pressure" on European Union members to rise to the occasion in Peru, particularly the 10 countries that have yet to make pledges on climate funding ahead of the Paris talks.

But is $38.2 billion more even enough? Some activists are critical of the OECD's calculations, saying part of the $61.8 billion in climate funding it reported should not have been counted. "All that glitters isn't gold," Oxfam's Kreisler told Agence France-Presse (AFP). She said supposedly "green" funding such as agricultural projects had been counted even when not directly linked to fighting climate change. Activists have also criticized the OECD for counting too many loans, which will have to be repaid, saying more of the $100 billion should be in the form of grants. "There are still problems with the accounting method, which includes a lot of loans," said Denis Voisin of the Nicolas Hulot Foundation, a French environmental group. "For now, the OECD report is a report for the countries of the north ... and that's great. But now all countries need to get involved in this process," Pasztor told AFP.