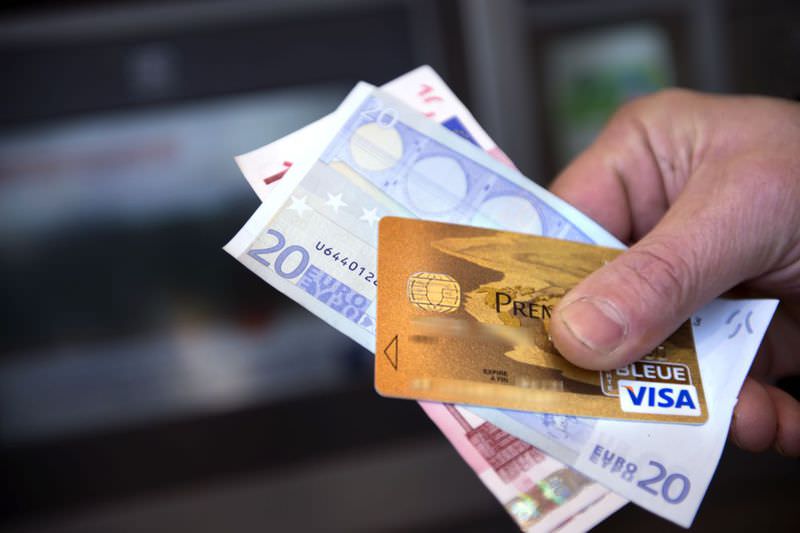 by reuters
Oct 14, 2015 12:00 am
A Greek TV commercial shows two fishmongers in a market touting their wares. "I've got sea bream," one shouts. "Me too," says the other. "I've got saddled sea bream," the first cries. "So have I," his rival retorts. "I take cards," the first says, silencing his competitor, who pulls a long face. Other commercials feature vets and pharmacists, all part of a campaign by banks to boost electronic payments in a country long dominated by cash. The drive is a boon for Prime Minister Alexis Tsipras' government as it seeks to boost revenue and crack down on tax evasion.

Greece lags far behind other EU countries in non-cash transactions. But Greeks have suddenly fallen in love with payment by plastic after capital controls were imposed in late June and banks were shut for three weeks.

About one million cash cards were issued in July and August in a population of 11 million, compared to about 100,000 a month before the capital controls, said Athanasios Geramanis, the country manager for Mastercard, one of the four payment services available in the country. "Consumers felt the urgent need to bypass the 60 euro ($68.15) withdrawal limit," Geramanis said, referring to the daily cash ceiling Greece imposed in late June. The limit has since been eased to 420 euros a week. "Greeks used to think that by getting a cash card, they were taking out a bank loan," he said. "All of a sudden, they discovered that cash cards can help them in their transactions."

Card payments accounted for barely 6 percent of total annual retail sales before the capital restrictions were imposed, compared to 60 percent in Denmark. Geramanis estimated that the proportion of card transactions had jumped to 25-30 percent since the summer, although it would smooth out in the coming months.

This could help the government, which is plagued by widespread tax evasion and has promised international lenders it would facilitate electronic payments to improve revenue collection under a third 86-billion-euro bailout deal agreed in August.

Businesses are required to issue a receipt for card payments that must be included in their revenue statements, meaning that tax authorities are able to see each transaction and also cross check it with bank records.

Deputy Finance Minister Tryfon Alexiadis announced incentives last week to promote non-cash payments in an effort to divert money from a huge grey economy which he said deprives state coffers of 15-20 billion euros in annual tax revenues. "There will be incentives for citizens, first of all - tax incentives, a prize lottery, refunds from banks and businesses," Alexiadis told lawmakers. There would be tax incentives for businesses too to help change the country's payment culture, he promised.

According to a study by management consultants A.T. Kearney, the shadow economy in Greece was equivalent to 24 percent of annual output in 2013. The European Commission estimated it at around one-quarter of gross domestic product in 2012.

Retailers, who already have some 150,000 card readers at their outlets, welcomed the measure, hoping it will boost sales because it overcomes the weekly withdrawal cash limit, and said they would need another 400,000 terminals to cover the retail sector's needs as card usage rises.

Some shopkeepers were previously reluctant to switch to plastic, partly due to the extra cost. Merchants pay about 150 euros for a card reader plus a commission to the bank on each transaction which can range from 1.2 percent to as much as 3.0 percent depending on the card issuer and the trader's credit rating and annual sales.

"It's a one-way street for us because of the capital controls," said the head of Greece's merchants association, Vassilis Korkidis. "As part of our "Cards everywhere" campaign, we are having talks with the banks to get the lowest commission possible." He said they wanted commission limited to between 0.8 and 1.1 percent.

Data from the association showed that about 45 percent of retail sales were done via plastic in July compared to 15 percent a year earlier.

Alexiadis plans to make the use of cash and credit cards mandatory for all professions such as doctors, dentists, lawyers but also electricians and plumbers, as of next year and promised a reduction in the commission charged by banks.

Doctors - long considered one of the groups most prone to tax dodging - initially opposed using plastic for their payment, arguing that it would make them a target for tax authorities and violate their patients' confidentiality. But they backed down after Alexiadis gave assurances they would not be singled out.

"We met Alexiadis who explained to us that this won't apply only to doctors but, gradually, to every professional group and that personal data will be protected," said the head of Athens doctors association, George Patoulis. "After all these clarifications, we have no reason to oppose the use of plastic money."

Analysts said plastic should help in the battle against tax evasion but it may take time. "The shift towards an increased usage of plastic money may initially create difficulties to some groups, for example pensioners," said EFG Eurobank chief economist Platon Monokroussos. "But in the long term, it could assist in fighting tax evasion, especially sales tax evasion."