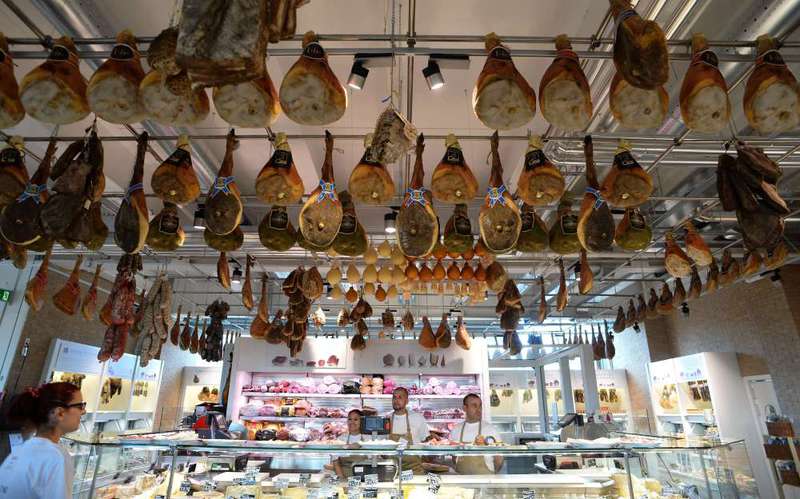 by Oct 17, 2015 12:00 am
Having conquered half the world, luxury Italian supermarket Eataly is getting ready to take on Europe, with a store in food-rival France the jewel in its crown.

Founder Oscar Farinetti says his food empire, which opened its first store in 2007, was built on an idea which was "not a stroke of genius but something rather ordinary."

"I live in the country with the most desirable food in the world and yet, although we have many renowned chefs and restaurants, we have no retail chain bringing the amazing biodiversity of Italian products to the world," he told AFP. The Eataly brand now has 28 stores worldwide, including outlets in New York, Tokyo, Dubai and Istanbul, and in 2014 the company boasted a turnover of 300 million euros. Farinetti has now set his sights on Europe: an Eataly store in Munich will open by the end of the year, followed by a food hall in Selfridges in London in 2016. He has decided to leave the opening of his Paris store until last, in 2018.

"For me the French are the most competent nation when it comes to food," he said. "We decided to leave Paris until last because we can't afford to make a mistake there. Entering the French food market is no easy feat." He insists, however, that Italian food has two advantages over its French adversary, its greater home-grown product diversity and the fact that "Italy's food was born not in a restaurant, but in the household."

"Passed down through generations, (it) is therefore simpler and easier to replicate than French cuisine.

Eataly has close ties to the Slow Food movement and Farinetti cites its founder Carlo Petrini as a friend and mentor.

Combatting the fast-food culture and teaching the art of cookery is a central part of Eataly's ethos, and takes pride of place in Farinetti's new venture. Dubbed the world's first food theme park, Fico Eataly World - set to open in 2016 in northern Italy - will have cooking labs and classrooms as well as breeding farms and demo fields with explanations on Italy's food cycle.

"We wanted to combine the food market with the restaurant world and above all emphasize teaching the culture of food," says Farinetti, whose stores have eateries which use in-house produce.

At the largest Eataly, 17,000 square meters in Rome, chefs whip up batches of mozzarella and knead pizza dough while shoppers wander between the market-style banks of fresh fruit and vegetables and wine-tasting seminars. "You might spend a little more than you would elsewhere, but the price is reflected in the quality," said middle-aged Italian shopper Vincenzo Sisi as he browsed the wine section. Esmeralda Perez, a Spanish expat in Rome, said the only downside was that the restaurants were "a bit noisy."

"The quality is fantastic, but if you're looking for an intimate place to bring a date, I wouldn't suggest here," she said.

Farinetti has been criticized by some for selling out and betraying the principles of Slow Food. And Italian investigative journalist Stefano Santachiaria in September accused him of paying staff low wages for long hours and relying excessively on short term or part-time contracts. Answering to such charges will now fall to Farinetti's new managing directors: his three sons and long-term business associate Luca Baffigo. The 61-year-old in September handed the role of president to Andrea Guerra, former CEO of luxury eyewear brand Luxottica, in order to immerse himself in Fico Eataly World. From chic urban supermarkets to fields of wheat: "You know, every 10 years I like to have a change of jobs," he said.
RELATED TOPICS