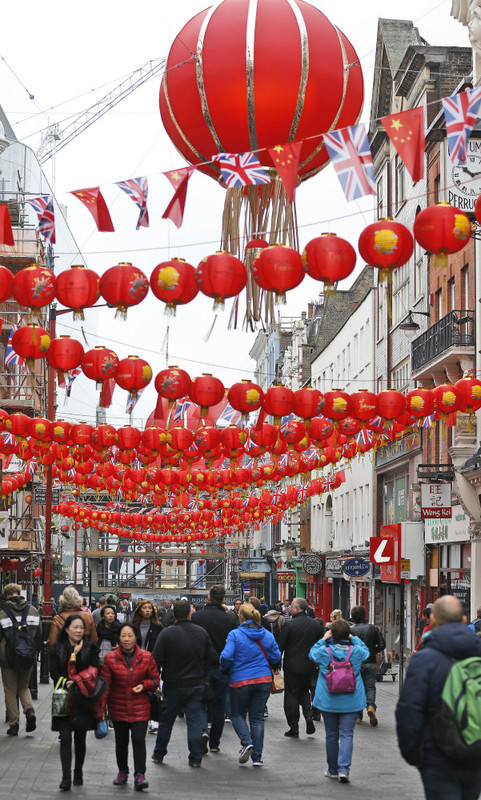 People walk through a decorated street in Chinatown in London. London is preparing for the visit of Chinese President Xi, accompanied by his wife Peng Liyuan, starting today.
by French Press Agency - AFP
Oct 19, 2015 12:00 am

Chinese President Xi Jinping begins a four-day visit to the U.K. on Tuesday in which human rights issues are to be eclipsed by lavish ceremonies and intensive business talks, heralding a ‘golden era' in ties

With an Asian superpower with deep pockets and international ambitions on one side and a European financial hub keen on attracting investment on the other, the scene is set for a U.K.-China love story. But Prince Charles will not attend an official banquet hosted by Queen Elizabeth II in what is being seen as a snub by the Dalai Lama-friendly heir to the throne. And Jeremy Corbyn, the outspoken new leader of the opposition Labour Party, could also ask Xi some tough questions about dissidents and media censorship.

These concerns are likely to remain secondary, however, as Britain rolls out the red carpet for Xi, who will get a carriage ride to Buckingham Palace and will address British parliamentarians at Parliament.

Xi is bringing along a retinue of bankers and businesspeople, which could include Jack Ma, the founder of Chinese e-commerce giant Alibaba, and a string of contracts are expected to be signed during the visit.

The state visit is the first since then-president Hu Jintao came in 2005, and both British Prime Minister David Cameron and China's ambassador to London, Liu Xiaoming, have said it will herald a "golden era" in relations.

Britain "is becoming the leader in Europe and, indeed, in the West" in its relations with China, Xiaoming said, while Cameron lauded increased trade ties. "We encourage investment, and China is investing more in Britain now than other European countries," Cameron told Chinese state television.

Economics professor Ivan Tselichtchev, an expert on Asia, said burgeoning relations between the two countries are led by a business rationale. "The U.K. is effectively the only European country showing a strong political will to attract 'China money' into infrastructure projects," he said. "In broader terms, perhaps more than any other major developed nation, the U.K. values the business dimension in its relationship with Beijing."

Chinese sovereign wealth funds, state enterprises and, increasingly, private companies are buying up British firms and land, creating joint ventures with local partners or setting out on their own in Britain - a bridgehead to continental European markets.

Michael Gestrin, an economist at the Organisation for Economic Co-operation and Development (OECD), has calculated that China has accounted for some $70 billion in mergers and acquisitions in Britain since 2008. Some of China's purchases have been striking on a symbolic level - like the takeover of the company that makes traditional London taxis.

But investments in infrastructure are more impressive and promise to grow further. Between 2015 and 2025, China could invest $162 billion, including in energy, real estate and transport, said Danae Kyriakopoulou from the Centre for Economics and Business Research in London and the co-author of a report on Chinese investments. "Following the victory of the Conservative Party in the May 2015 general election, infrastructure investment has once again been identified as a top policy priority given the U.K.'s big deficit in infrastructure assets resulting from chronic underinvestment," she said. "The country's northern regions should serve as particularly attractive propositions for investment given that the 'low-hanging' fruit in terms of infrastructure investment there have not been reaped in the same way as in the south."

China has already made some investments including in Manchester airport, from which Xi will depart on Friday after a visit to Manchester City Football Club.

Reflecting Britain's needs in the area, Minister of Finance George Osborne announced a giant tender for a high-speed train line linking London to northern England during a recent visit to China. The burgeoning relations are controversial for some, with The Economist magazine saying Britain was "sleepwalking" into relations with China, while the Daily Telegraph newspaper said there was "an awful lot of kowtowing to Chinese sensitivities and interests." The criticism has done little to dissuade business.

In the property market, three years after buying the London headquarters of Deutsche Bank, China is eyeing the ongoing boom, and the highlight of the visit in business terms could be a deal between French company EDF and its Chinese partners to build a new nuclear power plant at Hinkley Point in southwest Britain. China could also further its ambitions to internationalize its currency, the yuan. Among the possible deals planned during the visit is one for the first issuing of Chinese sovereign debt in yuan outside of China.
Last Update: Oct 19, 2015 1:13 am