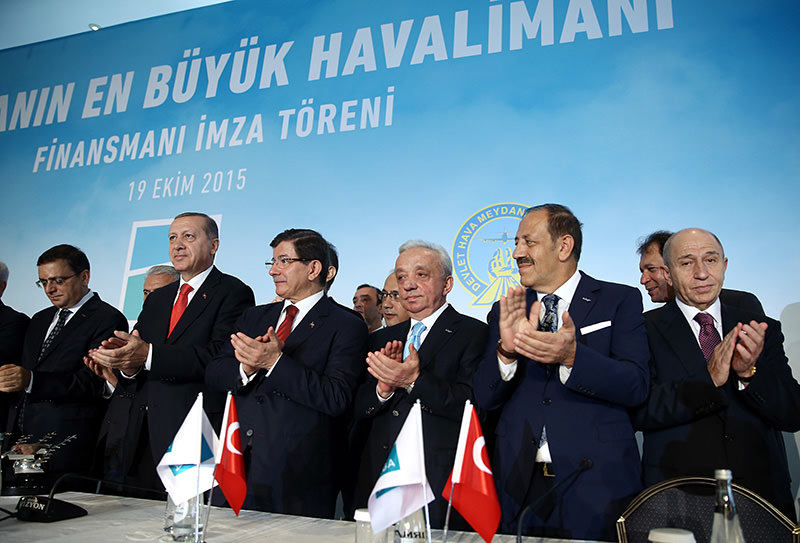 | AA photo
by Şeyma Eraz
Oct 19, 2015 12:00 am
Three public and three foreign-financed banks will provide 4.5 billion euros to a joint venture involving five Turkish construction companies that will construct Istanbul's third airport. The signing ceremony for the financing of the first phase of the airport, which is expected be the world's largest in terms of passenger capacity, was held in Istanbul on Monday with the attendance of President Recep Tayyip Erdoğan and Prime Minister Ahmet Davutoğlu.

During his speech at the ceremony, Erdoğan emphasized that the project will be the beginning of a new era not only for the banking and construction sectors, but also for the Turkish civil aviation sector. "After the completion of all stages of the project, Turkey, especially Istanbul, will become a global hub in world air traffic," Erdoğan said.

Stressing that the first phase of its construction would result in the partial opening during the first quarter of 2018, Erdoğan said: "The project will provide employment for approximately 80,000 people annually during the construction period. This figure will increase to 120,000 when the airport becomes fully operational."

Erdoğan underlined that the new airport would be an example to the world in terms of its impact on the environment. "Generating its own energy, this airport is designed to be eco-friendly and disabled-friendly," he said.

The IGA Havalimanı İşletmesi A.Ş. consortium, which won a tender held in May 2013 to build Istanbul's new airport, signed an agreement with six banks, including state-owned Halkbank, Ziraat Bankası and VakıfBank as well as the foreign-financed banks DenizBank, Garanti Bankası and Finansbank. The consortium includes Turkish construction companies Cengiz, Mapa, Limak, Kolin and Kalyon. According to the agreement, the loan maturity date will be in 16 years. Moreover, 3.5 billion euros belong to state-owned banks, while the rest are provided by private banks.

The total investment cost of the project is 10.2 billion euros, which is the highest investment amount Turkey has ever spent in this area. According to the IGA website, the airport will contribute 22.2 billion euros, in addition to value-added taxes, over 25 years to the state. The third airport, which is being built under the build-operate-transfer model, will be managed by the IGA for 25 years.

The airport will have 165 passenger jetways, four terminals connected with a railway system, three maintenance buildings, eight air traffic control towers, six runways, 16 taxiways, a 6.5 million-square-meter airport hangar with a capacity of 500 airplanes, an approximately 70,000 vehicle capacity parking area – touted as the largest airport parking lot in Europe – a clinic, fire department, hotels, a convention center and recycling and waste disposal plants. The airport will also host 150 airlines. The airport will be connected to the Istanbul metro, and multi-lane highways will be built to facilitate access. The area where the airport is being built was chosen after the ecological balance, wind data and the natural and artificial obstacles of the region were taken into consideration.

Davutoğlu announced that a tender will be held for a new metro line from the third airport to Gayrettepe in the first quarter of next year, which is aimed to be completed when the first phase of the airport becomes operational. The airport will also be connected to the Asian side in May 2016 when Istanbul's third bridge with linking roads is completed. "Turkey will be in the center of the linking roads, not only connecting the European and Asian sides, but also connecting the European and Asian continents along with Beijing and London," Davutoğlu said.

The construction of Istanbul's third airport has four stages. According to the schedule, the first stage of the airport is slated to commence operations in the first quarter of 2018. With the start of investments in the first stage, 80,000 additional jobs will be offered during the construction process on an annual basis. This figure will rise to 120,000 people on average annually after the airport fully comes into operation.

The first stage includes three runways from north to south and a terminal building with an annual capacity of 90 million passengers. When the first stage is completed it will enable two planes to land simultaneously, which is unprecedented in the world. It will also allow large aircraft such as the Airbus A 380 to land, which is not currently possible at the existing airports in Istanbul. The annual passenger capacity is estimated to reach 150 million when all stages are completed in 2028.