Chinese visit to Britain to sees $46 billion in deals 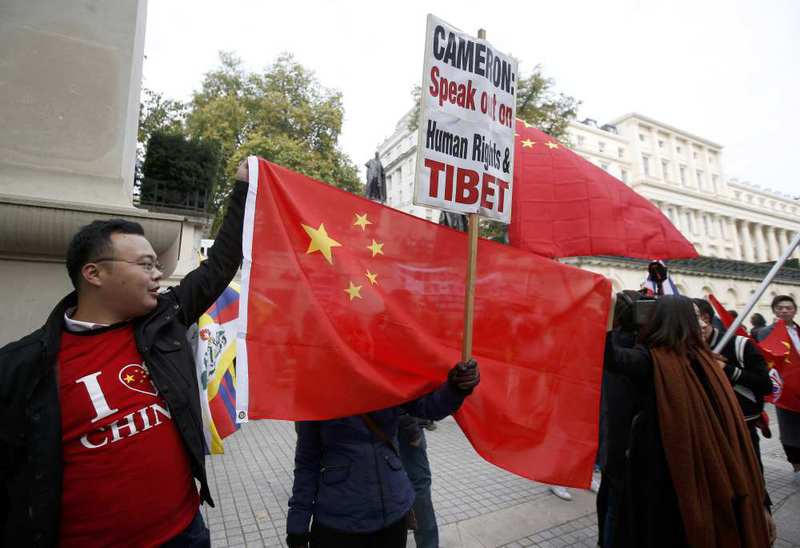 Supporters of China's President Xi Jinping and opponents hold flags and placards as they wait on the Mall for him to pass during his ceremonial welcome in London.
by Daily Sabah with Wires
Oct 21, 2015 12:00 am

British Prime Minister Cameron is set to agree to lucrative deals during the state visit of Chinese President Xi this week. The deals have sparked accusations that Britain is pandering to China to secure investment

Deals worth over 30 billion pounds ($46.4 billion) are to be signed during the four-day visit of Chinese President Xi Jinping to Britain this week, the London government said Tuesday. Giving few details on the deals, Cameron's office announced they would be in industries including retail, energy, financial services and aerospace and create 3,900 jobs in Britain according to AFP.

One major deal under discussion is for China to take a key role in a 24.5-billion pounds project to build Britain's first new nuclear power station in decades, Hinkley Point C in southwest England. French utility EDF has reached an agreement with Beijing's China General Nuclear Corporation and China National Nuclear Corporation to take a 33.5-percent stake in the project, French daily Les Echos reported. The agreement includes the possibility of a Chinese "Hualong" reactor in Bradwell, the site of a partially-decommissioned nuclear plant owned by EDF northeast of London.

Britain has laid on dollops of traditional pomp for the Chinese leader, whose visit opens with a ceremonial greeting by Queen Elizabeth II and a carriage ride to Buckingham Palace, where Xi and wife Peng Liyuan will stay during the four-day trip, according to AP. Tucked just off his route, lined with Chinese and British flags, will be rival groups of demonstrators some there to give Xi a warm welcome, others to protest human rights abuses.

Britain's Conservative-led government has been courting China, the world's second-largest economy, for years. When Xi's predecessor, Hu Jintao, paid a state visit to Britain in 2005, the countries announced $1.3 billion in trade deals.

Prime Minister David Cameron has said the visit heralds a "golden era" between the two countries. But some British politicians, businesspeople and trade unionists are alarmed by growing Chinese investment in key sectors of the British economy.

The deals have sparked accusations Britain is pandering to China to secure investment. Opposition politicians are urging Prime Minister David Cameron to raise China's human rights record in his several meetings with Xi during the four-day visit. Cameron is also under pressure to raise the issue of China selling steel at a loss on world markets.

Plunging world steel prices and a strong pound have pushed Britain's steelmakers into crisis, with 1,200 layoffs announced yesterday at Tata Steel just weeks after 2,200 jobs were lost at SSı's plant in northeast England.

Tata said the layoffs at plants in northeast England and Scotland were in response to "a shift in market conditions caused by a flood of cheap imports, particularly from China, a strong pound and high electricity costs."

Foreign Secretary Philip Hammond insisted Britain was "developing a mature relationship with the Chinese." "I don't think we are naive," he told the BBC. But James McGregor, a China expert at consulting firm APCO, said Beijing would not respect a country that did not stand up to it.

"If you act like a panting puppy, the object of your attention is going to think they have got you on a leash," McGregor said.

The trip follows a five-day visit by British finance minister George Osborne to China during which he opened bidding for contracts to build a high-speed rail link that will link London with northern cities. Xi's visit comes a decade after that of his predecessor Hu Jintao. Relations between Britain and China cooled considerably in 2012, when Cameron received the Dalai Lama, the Tibetan spiritual leader considered a dangerous separatist by Beijing. Campaign groups have cautioned that Britain's emphasis on investment opportunities could mean less emphasis on concerns over China's human rights record.