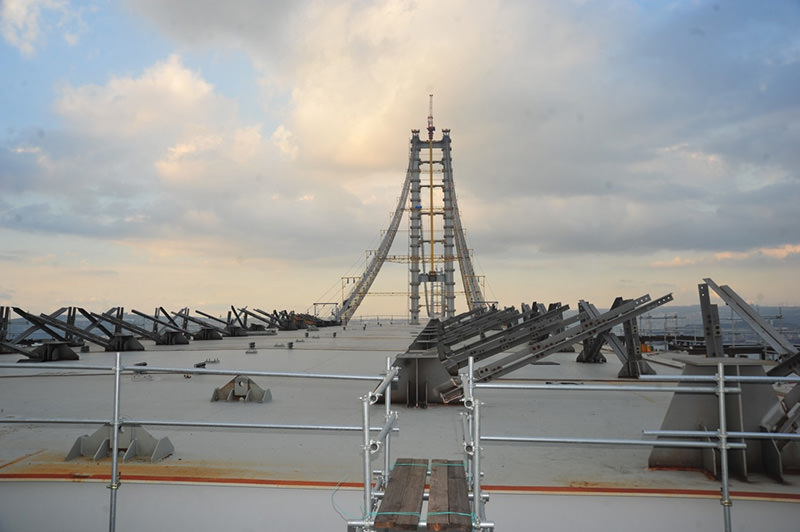 | AA photo
by daily sabah
Oct 21, 2015 12:00 am
A long suspension bridge that straddles the Marmara Sea and connects the Izmit province to the city of Yalova will "hopefully" be opened to traffic in March 2016, Turkey's Minister of Transport, Maritime and Communication, Feridun Bilgin, told Anadolu Agency's Editor's Desk on Wednesday.

The 2,682 meters long bridge will significantly decrease the travel times around the Gulf of Izmit. When completed, it will be the fourth-longest suspension bridge in the world by the length of its central span.

The bridge is also part of a highway project which is expected to ease traffic between Istanbul and the Aegean city of Izmir. The highway will be 420 kilometers in length when completed.

The Izmit Gulf Bridge came to the fore in March when a cable on the bridge snapped, causing the construction to suffer a serious setback. After the news broke, a Japanese engineer working on the project committee suicide, leaving a note saying that he took the sole responsibility for the rupture of the rope. His note said: "This failure ends my private and professional life. This project was mine and my country's pride. No one else is responsible for this failure."

Minister Bilgin also touched upon the Istanbul's Eurasia Tunnel Project during his talk on Wednesday. He said the tunnel will be opened to service by the end of 2016.

The 5.4 kilometer undersea motorway tunnel being built between the European and Asian sides of Istanbul, will connect the Kazlıçeşme neighborhood on the European side to Göztepe in Asia and will cut the travel time between the two congested areas to 15 minutes.
Last Update: Oct 21, 2015 1:16 pm