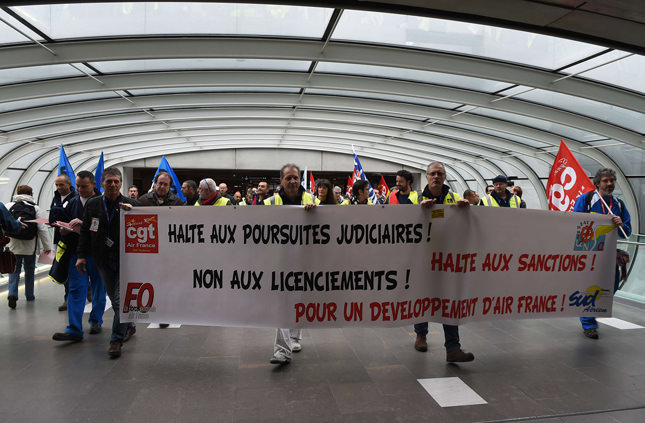 by Anadolu Agency Oct 22, 2015 12:00 am
Air France staff went on strike Thursday in protest at proposed job cuts and the suspension of six workers who allegedly attacked an airline executive, local media reported.

Trades' unions called for workers to protest outside the National Assembly in Paris as managers and union representatives meet in a bid to reach an agreement over the airline's restructuring plans.

Current proposals would see 2,900 ground staff, cabin crew and pilots lose their jobs over the next two years.

In a statement, Miguel Fortea, secretary general of the General Confederation of Labor, asked ground staff, air crew and flight attendants to protest in uniform to defend jobs and supporting colleagues.

On Oct. 5 workers stormed a meeting between management and unions at the airline's head office at Charles de Gaulle Airport.

Six staff were later arrested and suspended without pay.

President Francois Hollande has voiced his opposition to the job cuts. "Sackings can be avoided if the pilots do what is necessary, if management makes definite proposals, if the ground crews become conscious of certain realities," he said Monday.

The flag carrier has set an early January deadline to conclude negotiations.