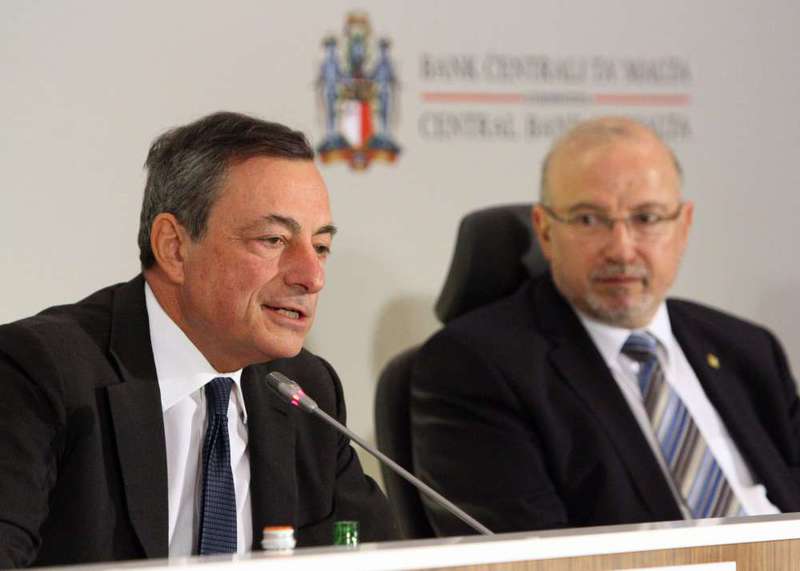 The European Central Bank left interest rates and its money-printing program unchanged on Thursday and President Mario Draghi said it would review in December what more it could do to tackle threat of weak inflation. Falling commodity prices and emerging market concerns are weighing on economic prospects, he said.

Draghi told a news conference that the bank would fully pursue its asset purchase scheme up to 60 billion euros ($68 billion) a month and underlined he could extend it beyond September 2016 as part of efforts to boost euro zone growth and bring inflation closer to its target of close to 2 percent. But in a direct call to euro zone governments to add their weight to a still tentative recovery in the region, he stressed that monetary policy "should not be the only game in town". "Fiscal policies should support the economic recovery, while remaining in compliance with the EU's fiscal rules," he said.

The ECB decision to hold key interest rates at record lows was widely expected ahead of the meeting of its top policy-makers in the Maltese capital of Valletta. Most attention was on clues as to whether it was ready to expand or extend the bond-buying scheme launched in March.

Although some rate-setters have argued that the ECB should tweak the asset purchases now, most believe that quantitative easing needs to be given more time to work as its positive effects are just starting to pass through.

Draghi emphasised that argument, saying that while risks to inflation and growth remained on the downside, deeper analysis was required before taking further action. "In this context, the degree of monetary policy accommodation will need to be re-examined at our December monetary policy meeting," he said.

Draghi noted that while inflation, which dipped into negative territory last month, would remain very low in the near term, that mainly reflected low oil prices and forecast that it would rise towards the end of the year - partly due to base effects 2014's oil price plunge.

Eurozone economic growth is slowing again, with even powerhouse Germany seeing a recent string of poor data, and one of the ECB's favoured gauges of inflation expectations, the five-year, five-year euro zone breakeven forward, has fallen to 1.7 percent from 1.85 percent in July.

Lending surveys have continued to improve, however, providing some ammunition for Draghi to argue that QE is finding its way into the real economy and does not urgently need to be adjusted.

recently said there would be scope for the ECB to ramp up QE, as its programme is smaller relative to the size of the euro zone economy than those launched by the Fed, the Bank of Japan and the Bank of England.

The median probability of the ECB extending QE beyond its current September 2016 end-date stood at 70 percent in a recent Reuters poll of economists. The same poll saw a 40 percent chance of increased monthly purchases over the next six months.

Yet analysts have warned that upping the pace of purchases may create a shortage of bonds down the line and that extending the scheme may require the ECB to change some of the rules of engagement to avoid hitting technical limits.

These issues, along with the ECB's failure to revive the market for asset-backed securities, have raised the prospect of an expansion in the range of assets that the ECB can buy to include corporate bonds or even equities. But its direct involvement in private corporations could meet political and internal resistance.
RELATED TOPICS