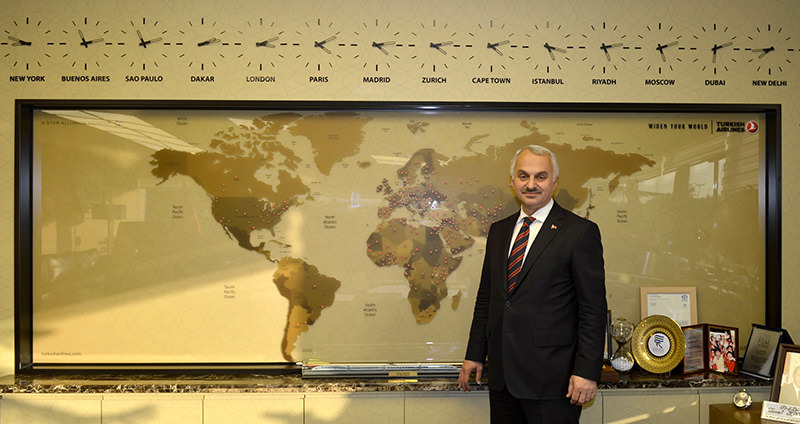 by Anadolu Agency Oct 23, 2015 12:00 am
Istanbul's third airport under construction, expected to be the world's largest in terms of passenger capacity, will be "the apple of the Developing Eight countries' eye," Turkish Airlines CEO Temel Kotil told Anadolu Agency.

His comments in an interview with Anadolu Agency at the airline's headquarters in Istanbul came after the signing of an agreement between the IGA Havalimanı İşletmesi A.Ş. consortium, which won a tender in 2013 to build Istanbul's new airport, and six Turkish banks agreeing to provide 4.5 billion euros ($5.1 billion) for the first leg of the project.

Istanbul's third airport, after Atatürk and Sabiha Gökçen, is being built in Arnavutköy, in the European northwestern outskirts of the metropolis. The airport is expected to boast a world record annual capacity of 150 million passengers.

Kotil spoke to Anadolu Agency as Turkey is being prepared to take over the D-8 Organization for Economic Cooperation's civil aviation presidency in 2016. Ankara last chaired the board in 2008.

The D-8 is a grouping of emerging economies in the Muslim world, including Bangladesh, Egypt, Indonesia, Iran, Malaysia, Nigeria, Pakistan and Turkey, which was established in 1997 in Istanbul by former Turkish Prime Minister Necmettin Erbakan. The organization reflects a combined population of 1 billion and a market of about $1 trillion.

D-8 established cooperation in civil aviation through the implementation of a D-8 Civil Aviation Memorandum of Understanding, which was adopted in September 2007. With this agreement, national carriers of the D-8 have enhanced their cooperation.

Kotil stressed that there had been "close cooperation" between the Turkish carrier and those of D-8 members. "For example, Turkish Airlines flies to seven cities in Iran and we fly to Abuja, the capital of Nigeria as well as Kano and Lagos daily," he said, adding that the Turkish company also shared an agreement with Iran Air.

Turkish Airlines, which flies to all D-8 countries, began direct flights to Abuja last March. The carrier has strengthened its presence in D-8 countries and now has a presence at 20 destinations in D-8 countries, making it the leading carrier to the D-8.
Last Update: Oct 24, 2015 12:23 am
RELATED TOPICS