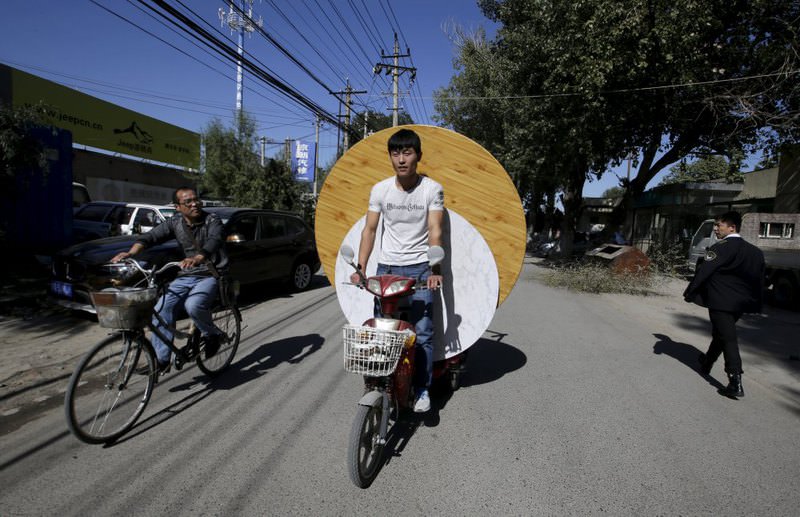 A man rides an electric bicycle carrying dining tables along a street inside a residential area for migrant workers on the outskirts of Beijing.
by French Press Agency - AFP Oct 26, 2015 12:00 am

China's leaders gather today to hash out a new Five Year Plan to battle slowing growth, and analysts say they must choose between chasing a traditional GDP target and embracing reforms such as to the "one child policy" to help the country develop its full potential.

After a decades-long boom, experts say China needs to embrace further liberalization to avoid the "middle income trap" when developing countries fail to transform their growth model to maintain their competitive edge. According to the government, the world's second largest economy grew 6.9 percent year-on-year in the third quarter, its weakest rate in six years - although independent analysts believe the true figure could be significantly lower.

Implementing reforms that are necessary to ensure long-term sustainability come at a cost for current growth - a dilemma for the ruling Communist Party, whose projected aura of competence underpins its claim to legitimacy. Julian Evans-Pritchard of Capital Economics expected the growth target to be set at or only slightly below the current goal of around seven percent.

"Policymakers will struggle to meet such a high target without undermining progress on rebalancing," he said. Five Year Plans are a holdover from the planned economy days of the past, but still provide a broad blueprint for the country, a key driver of global growth whose performance affects companies from Australia to Zimbabwe. China's embrace of market economics and opening up to the rest of the world from the late 1970s transformed the livelihoods of hundreds of millions of people and propelled the country to global prominence, but growth has been slowing for several years.

Beijing has repeatedly said it wants to transition to a "new normal" of slower, more reliable growth led by domestic consumer demand, rather than the overheated exports and state investment of the past.

But in recent months questions have been raised over its ability to manage the process by stumbles such as clumsy interventions in falling stock markets.

The Communist conclave, known as the Fifth Plenum and typically held at a Beijing hotel, brings together the ruling party's 205-strong Central Committee and around 170 reserve members for four days from Monday to burnish the plan, although it will not be finally approved until China's legislature meets next year.

Economic reformer Deng Xiaoping argued against ideological objections to change with the metaphor that it did not matter whether a cat was black or white, as long as it caught mice.

But now the color is critical, says Hu Angang, an economics professor at Tsinghua University who served on an experts committee that helped guide the planning process. China has become the world's biggest polluter and its major cities are regularly blanketed by choking smog, causing widespread public anger.

"Chasing mice in the form of GDP is still important, but making the cat 'green' is even more important."

Leaders will also seek to address social restrictions that obstruct growth, such as residency rules and the "one child policy," which limits most couples to a single offspring.

It was introduced in the late 1970s over fears that the skyrocketing population was economically unsustainable. After years of strict, sometimes brutal enforcement, by a dedicated government commission China's population - the world's largest - is now ageing rapidly, gender imbalances are severe, and its workforce is shrinking.

The concerns led to limited reforms in 2013, including allowing a second child for some couples in urban areas, but relatively few have taken up the opportunity.

Several Chinese media reports in recent weeks have cited researchers urging a two-child policy for all and Bank of America Merrill Lynch said: "We expect the one-child policy to be significantly loosened and baby-product makers should benefit."

But even a dramatic announcement does not guarantee change.

China has a mixed record when it comes to achieving its planning goals, according to Anne Stevenson-Yang, co-founder of China analysis firm J-Capital Research, and slowing growth will make it more difficult to overcome longstanding bureaucratic resistance.

The failure to reform the one-child policy was a "significant emblem of paralysis in this government," she said.

"There's no desire to have it anymore, there's no need for it anymore. There's a lot of loosening around the edges, but they have this bureaucracy they don't seem to be able to get rid of."
RELATED TOPICS