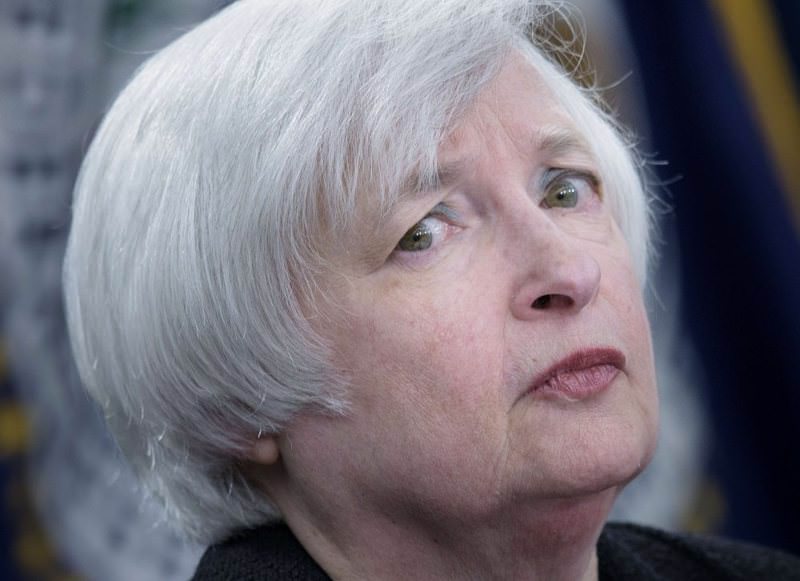 by French Press Agency - AFP Oct 26, 2015 12:00 am
Federal Reserve Chair Janet Yellen faces a rare open split among her team of policymakers as they head into a meeting Tuesday and Wednesday to again weigh raising interest rates.

A new wave of doubts about the U.S. economy among several Fed officials is almost certain to see the central bank again put off the decision for its first hike in the benchmark federal funds rate in nine years, analysts say.

A rate cut Friday by the People's Bank of China and signals the day before that the European Central Bank is leaning toward lower rates or more stimulus boost the argument that the world economy, and the U.S. in turn, remains vulnerable and would not benefit from a higher US rate.

Many analysts are now betting the Federal Open Market Committee's first step to begin lifting the fed funds rate up from the 0-0.25 percent level will not happen until next year. "It is highly unlikely that the FOMC will announce a change in the federal funds target range at the Oct. 27-28 policy meeting," said financial analysts at Nomura. "We continue to believe that the most likely timing for liftoff is the March 2016 FOMC meeting."

The Fed message "will show a marking down in the Fed's assessment of economic activity and the strength of the labor market," with some blame put on the soft global economy, predicts Deutsche Bank. That is not where Yellen, now in her second year at the head of the Fed, expected to be, nearly seven years after the fed funds rate was slashed to zero to combat the Great Recession.

A year ago FOMC members were confident enough in U.S. growth that, on average, they were predicting the fed funds rate would be at 1.25 percent by the end of 2015. Following the FOMC meeting in September Yellen said she was still confident that U.S. growth data would justify a rate increase by the end of the year. The FOMC appeared to be only marginally on the side of waiting, some members wanting to see just a bit more evidence from economic data that the US economy was ready. But within weeks there were more signs of the global malaise spilling over into the U.S. economy.

U.S. exports continued to slow due to the strong dollar, and with them industrial output.

Inflation, which the Fed wants to rise as a sign of strength, fell. August and September job creation was more feeble than expected, and workers' wages - another crucial gauge of strength - also remained stubbornly flat. That stirred two of the five Fed governors, Lael Brainard and Daniel Tarullo, to come out firmly on the side of waiting until 2016.

Tarullo said in a television interview that he "wouldn't expect it would be appropriate to raise rates" before next year. "A premature rise might be harder to deal with than waiting a little bit longer," he said. And Brainard, the newest member of the board, said in a speech that the downside risks to the economy "make a strong case for continuing to carefully nurture the U.S. recovery - and argue against prematurely taking away the support that has been so critical to its vitality."

In the past week two other top central banks offered more justification for another rate postponement. On Thursday ECB President Mario Draghi said it could weigh new measures to boost European growth at its December meeting amid deflation worries.

And on Friday the rate cut by the People's Bank of China, made to counter eroding momentum in the Chinese economy, suggested that China is weaker than its official 6.9 percent growth rate indicates.
RELATED TOPICS