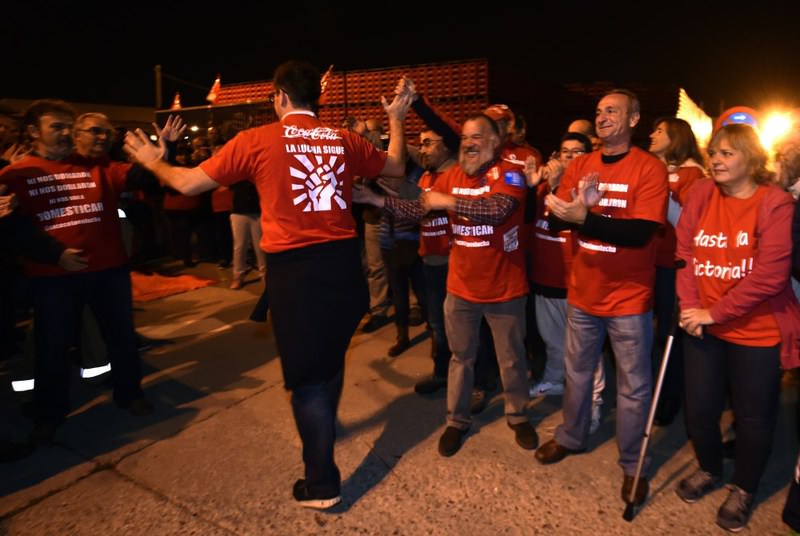 by French Press Agency - AFP Oct 26, 2015 12:00 am
To cheers and applause, 220 employees are celebrating their return to work at a Coca-Cola factory near Madrid after they blocked its closure in court, marking a rare legal victory for workers in Spain where one in five people are out of work.

After what supporters call a David-and-Goliath battle, the reinstated workers were greeted with a guard of honor by comrades when they arrived each day at dawn this week to start their shift.

In January 2014, Coca-Cola Iberian Partners, the bottler for the soft drinks firm in Spain, Portugal and Andorra, announced over a thousand workers would be laid off at the bottling plant in Fuenlabrada, about 20 kilometers (12 miles) south of Madrid.

Most of the affected workers accepted being let go, took early retirement or agreed to be moved to another plant. But not 220 of them. The company then closed three of its 11 plants. But not the one in Fuenlabrada.

The workers launched a boycott campaign under the slogan "If Madrid no longer makes Coca-Cola, Madrid will no longer drink it," went on strike and took the company to court.

For 21 months, they staged a protest camp outside the entrance to the plant.

It was first made of tents, which then got replaced by a large cabin decorated with Communist flags. They even made omelets with eggs from the chickens they raised at the camp. "I came every day so that I would not be home alone," said Ana, who like all the other protesting workers declined to give her last name, giving instead a fictional surname "Fernandez." "We defeated the giant. I loved the company - this was the worst break-up of my life," the 34-year-old added.

Another worker, Miguel "Fernandez", said he was proud to have taken part "in the most symbolic fight" of Spain's economic crisis, which has left nearly five million out of work.

"The company told everyone that it would never open this site and called workers to propose voluntary departure," the 37-year-old added. Spain's National Court in June 2014 annulled what was called a "collective layoff" and ordered the company to reinstate them. The court argued that the company had not respected the workers' right to strike since the Coca-Cola subsidiary continued to supply its clients with soft drinks made at other factories.

The ruling has inspired other Spanish unions to take court action to try to block staff cuts at other firms, including telecoms giant Telefonica and Vodafone. "Obtaining the annulment of another collective layoff plan will be very difficult because the case was very specific," said a lawyer from a major law firm who spoke on condition of anonymity because he defends firms involved in layoff plans. In the Coca-Cola case, there was "a very combative union response" and a long strike, he said. While the workers were reinstated in Fuenlabrada, they have not kept the same jobs with Coca-Cola Iberian Partners deciding to transform the bottling plant into a logistics center. The National Court said in a ruling earlier this month that Coca-Cola does not have to give their bottling jobs back as long as it maintains their pay and conditions in their new roles. Ana said she returned to the factory "with her head held high, but furious".

"They are not taking me back as a laboratory chemist but as a warehouse worker! It's illogical that the courts allow this," she said.

The workers' lawyer, Enrique Lillo, fears the company is setting a "trap.". "The company can say there is not enough work for them to do, and then come up with another layoff plan," he said. Lillo plans to take the National Court's ruling to Spain's Supreme Court. He wants to company to re-open some production lines at the plant. Asenjo said the legal fight had to continue. "We won, obviously," he said. "The workers who were reinstated now have a future, their salaries are guaranteed but we're going to keep fighting in court because our conditions were changed unilaterally."

Coca-Cola Iberian Partners said it wants to "guarantee the profitability of its activities and continue to employ the 4,380 workers who are still linked to the company in Spain."
RELATED TOPICS