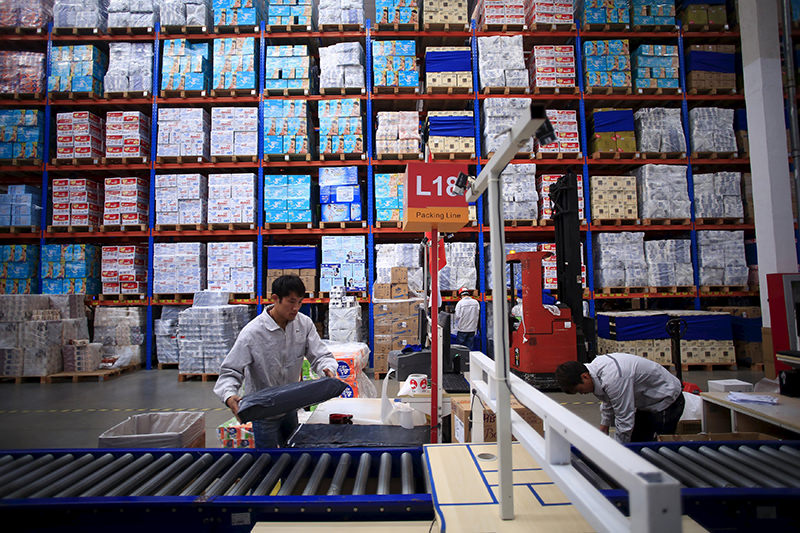 Total gross merchandise volume, a measure of sales, matched the 2014 dollar total of $9.3 billion just after 12:30 p.m. Chinese time, after the promotion began at midnight.

"The 2015 sale has eclipsed last year's final results in a little over half the time," it said.

In an earlier release Alibaba CEO Daniel Zhang said: "The whole world will witness the power of Chinese consumption this Nov. 11."
"Singles Day" is not a traditional Chinese festival, but Alibaba has been pushing Nov. 11 – 11/11 being a date heavy on ones – since 2009 as it looks to tap an expanding army of Internet shoppers in China, which has the world's biggest online population of 668 million.

At first it was marketed as an "anti-Valentine's Day," featuring hefty discounts to lure the country's singletons and price-sensitive buyers.
With sales hitting new highs year after year, "Singles Day" has become a lucrative business opportunity embraced by all online retailers in China, with competition between them turning increasingly fierce.

The event has received vocal support from the government at a time when China's economic expansion is slowing and Beijing is trying to transform its growth model into a more sustainable one driven by consumption.

Chinese Premier Li Keqiang's office called Alibaba Chairman Jack Ma hours ahead of the promotion kicking off, "congratulating and encouraging the creation and achievement of the 11.11 event," said a posting on a social media account of Tmall, the group's business-to-consumer arm.

Chinese Internet users showed off their acquisitions Wednesday with many lamenting that they had spent far too much money.

"I can only afford to eat dirt for the next half year," said a user on the Twitter-like Sina Weibo, with an attached screengrab of a Taobao app showing she had bought 42 items.

But some consumers also expressed concerns about fake products.

"Good luck. Hope you guys will not get phony products or things that turn out to be useless," a Sina Weibo user said.

Headquartered in the eastern city of Hangzhou, Alibaba does not sell products directly but acts as an electronic middleman, operating China's most popular consumer-to-consumer platform, Taobao, which is estimated to hold more than 90 percent of the market.

Nasdaq-listed rival online marketplace JD.com reportedly filed a complaint with the government last week, accusing Alibaba of monopolizing the market by restricting suppliers from participating in other operators' promotion events on Nov. 11.

But Alibaba, which is listed on the New York Stock Exchange, shrugged off the allegations, claiming that it owns the "Singles Day" brand.

"Today the chicken reported on the duck, accusing the duck of monopolizing the lake," said a spokeswoman for Alibaba's promotional event, according to a Chinese media report.

In comparison with "Singles Day," desktop sales for the five days from Thanksgiving through Cyber Monday in the United States last year stood at $6.56 billion, according to Internet analytics firm comScore.