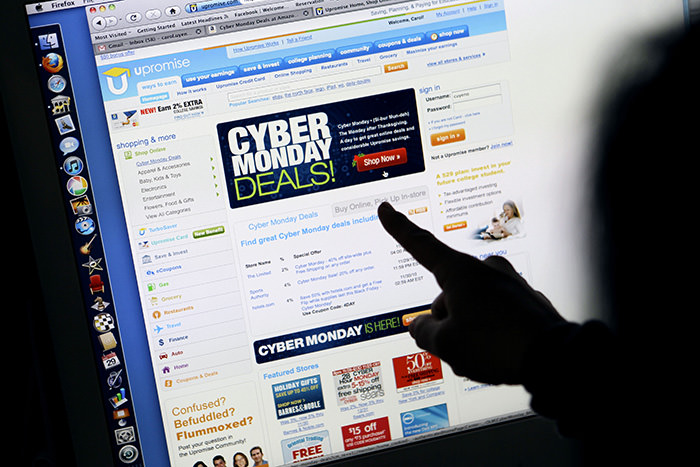 a consumer looks at Cyber Monday sales on her computer at her home in Palo Alto, Calif. (AP Photo)
by Dec 01, 2015 12:00 am
Americans bought more than $3 billion worth of goods on Cyber Monday, a leading survey showed, as bigger-than-expected discounts and strong demand for electronics and toys added up to the biggest ever day for U.S. online sales.

Mobile devices accounted for 26 percent of online sales, according to the Adobe Digital Index report, based on data from 200 million visits to 4,500 retail websites on what is traditionally the busiest day of the year for Internet shopping.

A spike in online sales on the first Monday after the U.S. Thanksgiving weekend was originally attributed to fast Internet connections in the office, which persuaded shoppers to wait out Black Friday and make purchases online from their workplace.

As the tradition of Cyber Monday has grown over the last decade, online retailers have offered bigger promotions. The average discount on items sold during Cyber Monday was 21.5 percent, Adobe said in its report.

This contributed to a 16 percent rise in online sales to $3.07 billion.

"So many businesses fared better this year because they planned it out better," said Marshal Cohen, chief industry analyst at NPD Group, a retail industry research firm. "Overall, pretty much every retailer performed better than in years past."

Among many strong performers, Amazon.com Inc stood out, clocking a 21.1 percent rise in Cyber Monday sales, according to e-commerce software provider ChannelAdvisor.

Amazon itself said sales of its electronic gadgets more than tripled over the entire Thanksgiving weekend, with the Fire tablet its top-selling product.

Online sales were in stark contrast to the performance of brick-and-mortar retailers over the four-day weekend. Sales fell 10.4 percent from a year earlier to $20.43 billion, according to research firm ShopperTrak.

Cyber Monday did not go without a hitch, however. Many consumers spent hours waiting in virtual lines and about 14 in every 100, or more than double the average for a normal day, logged on to find their chosen product out of stock.

Star Wars fans weren't the only disappointed consumers. Samsung Electronics Co Ltd's 55-inch screen 4K TVs were among the items most often out of stock, as were some Sony PlayStation and Microsoft Xbox console bundles.