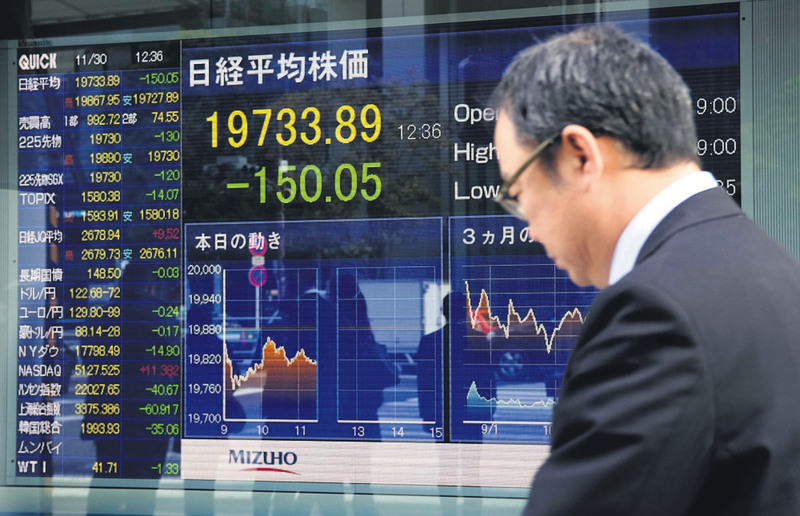 by Associated Press Dec 01, 2015 12:00 am
Japan's central bank governor and other officials are stepping up appeals to cash-rich corporations to do more to boost the country's faltering economic recovery.

The flurry of comments aimed squarely at business leaders coincide with a push by Prime Minister Shinzo Abe to attack broader trends slowing Japan's growth: a shrinking and aging population and a corporate culture light on work-life balance and heavy on overwork. Soon after taking office nearly three years ago, Abe launched a three-pronged recovery strategy focused on reviving the world's No. 3 economy through strong public spending, massive monetary easing and sweeping reforms of a post-war industrial structure that is not delivering the growth and productivity gains seen in the past.

The so-called "Abenomics" policies have weakened the yen, helping to fatten corporate earnings and share prices and have made some headway in countering deflation. With the economy in its second recession since Abe took office, the appeals to big business to share more of its wealth have gained urgency.

"This issue comes down to a chicken and egg situation," Kuroda told business leaders Monday in Nagoya, the heart of Japan's thriving auto industry. "Taking actions now is a prerequisite for firms to be among the winners in the future," said BOJ Gov. Haruhiko Kuroda, arguing that companies could afford to weather a slight downturn given their recent "extremely high" profits. Katsunobu Kato, an Abe ally who recently was appointed to head his campaign to counter the falling birth rate, voiced a similar appeal. "There is a limit to what government can do. We are expecting the private sector to help," said Kato, who is tasked with ensuring the country's population does not fall below 100 million, from the current 126 million. Kato also acknowledged that the ambitious reforms Abe has proposed will take "a fair amount of time."

In the meantime, he urged companies to raise wages faster, increase permanent hiring of temporary workers, and invest more at home rather than in foreign factories and acquisitions, to ensure a "positive economic cycle led by private-sector demand."

China's slowdown has reverberated in Japan, contributing to a 0.8 percent contraction in GDP in the July-September quarter.

The government said last week it will draft a supplementary budget and provide cash handouts to pensioners to help spur consumer spending. Data released Monday, although weaker than hoped, suggest Japan may be emerging from recession.

Factory output fell 1.4 percent in October from a year earlier as production of chemicals, nonferrous metals and telecoms equipment dropped. But production rose from the month before for the second straight month.

Kuroda, in assessing the economy, repeatedly pointed to China as a persisting risk. But he remained upbeat, saying the recovery was intact and reassuring his listeners that the BOJ will adapt its monetary policy to ensure Japan moves toward 2 percent inflation.
RELATED TOPICS