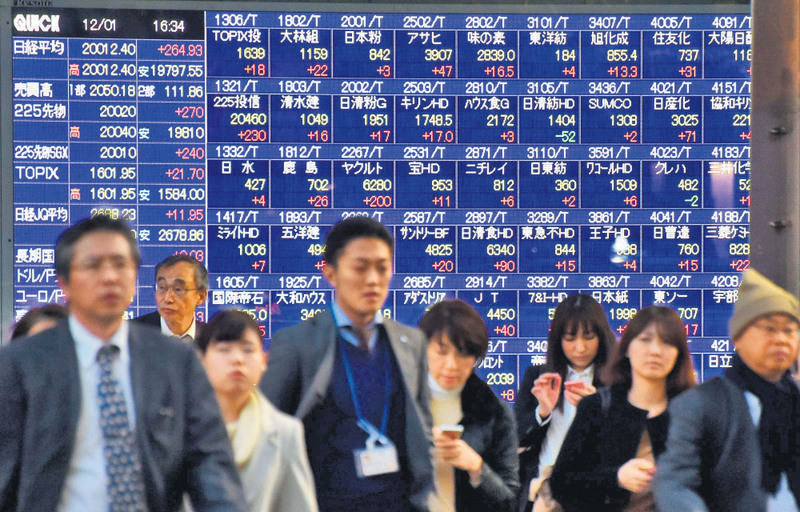 Pedestrians walk past a share prices board of the Tokyo Stock Exchange in Tokyo yesterday. Tokyo's benchmark stock index closed above the key 20,000 mark for the first time since late August thanks to upbeat data on investment by Japanese companies.
by Dec 02, 2015 12:00 am

The drop in the $1.1 trillion Government Pension Investment Fund - the worst quarterly fall since 2008 - came after it decided last year to double the amount of equities in its bond-heavy portfolio to generate higher returns

Japan's public pension fund - the world's biggest - lost a whopping $64 billion in the July-September quarter, according to a new report, as global equity markets plunged this summer on fears over China's economy.

The drop in the 135 trillion yen ($1.1 trillion) Government Pension Investment Fund (GPIF) - the worst quarterly fall since 2008 - came after it decided last year to double the amount of equities in its bond-heavy portfolio to generate higher returns.

The move was aimed at dealing with Japan's soaring number of retirees who depend on the mammoth pension, but the quarterly loss highlights the risks of that strategy.

In a report on Monday, the pension fund said its total value declined 5.6 percent, or 7.89 trillion yen, in the three months to September, as Japanese and overseas share prices plunged due to fears over a sharp slowdown in China. Beijing shocked equity markets worldwide in August with a devaluation of its currency, the yuan, setting off a precipitous drop on stock exchanges across the globe.

The pension fund said its Japanese equity investments dropped 13 percent in the last quarter, while its international stock holdings fell 11 percent in value. Last year, the fund announced it would move to double its stock holdings from 24 percent to 50 percent. The fund previously had more than 70 percent of its assets invested in lower-yielding domestic government and foreign bonds.

Chief Cabinet Secretary Yoshihide Suga, the Japanese government's top spokesman, on Monday waved off concerns about the drop, noting that share prices have rallied since the summer. "They [fund officials] will see some criticism for this," Ayako Sera, a market strategist at Sumitomo Mitsui Trust, told Bloomberg News. But "the liabilities of public pensions have an extremely long duration, so it's best not to carve it up into three-month periods. However, from a long-term perspective, it's necessary to continue monitoring whether the timing of last year's allocation was good or not."

Japan's pension fund, equivalent to a quarter of the entire economy, towers over its nearest competitor - Norway's $700 billion pension plan.

Unlike some other more adventurous vehicles, it has long kept the majority of its cash in super-safe and super-low return Japanese government bonds. But with a growing number of retirees and shrinking workforce straining government finances - and Tokyo struggling to boost the world's number-three economy - Japan's pension fund managers are looking for ways to improve their returns.

About half of the country's social security budget goes to pension funding, so bolstering the performance of the fund would take pressure off the public purse.
RELATED TOPICS