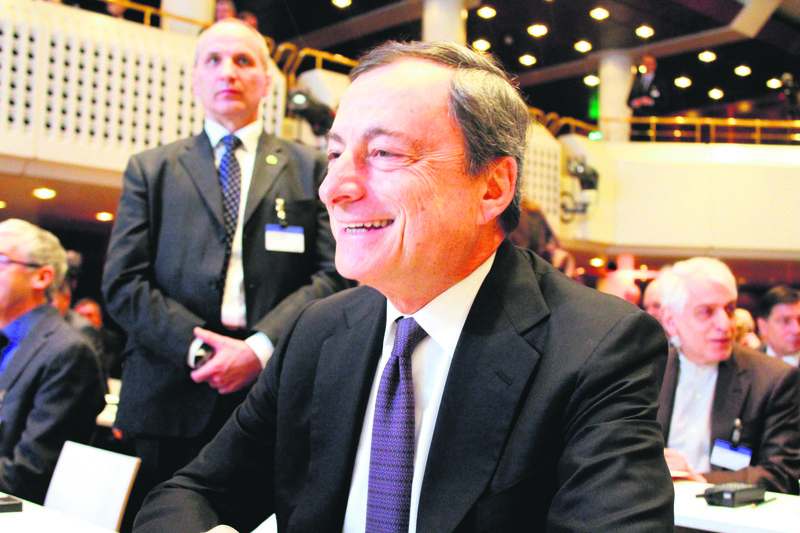 The European Central Bank head Mario Draghi has signaled clearly that action is coming this week when the bank's governing council meets. So clearly, in fact, that the challenge as for parents with overexcited children may be simply to avoid disappointing expectations. That means that this week's meeting could bring surprises. Draghi may seek to exceed expectations by expanding its bond-buying stimulus program or cutting interest rate more than analysts foresee. One consequence of such action could be a weaker euro against the dollar. Currently, the euro is hovering around $1.06. Some think it could head down toward $1.00, so-called parity; others, that Draghi may have to over-fulfill expectations just to keep it where it is.

The weaker euro or, to look at it another way, the stronger dollar would mean cheaper European travel for Americans. But it could also hurt the profits of American companies doing business in Europe, because the currency shift will shrink euro earnings in dollar terms. More broadly, a weaker euro would help eurozone exporters by making their goods more competitive in major trade partners including China, the U.S., Britain and Japan.

Starting from the ECB's Oct. 22 meeting and in subsequent speeches, Draghi has indicated action is likely in December. Through its stimulus actions, ECB aims to make credit cheaper for companies to support growth, which is still weak at just 0.3 percent in the third quarter. Most of all, it is trying to push inflation higher from 0.1 percent toward its goal of just under 2 percent annually. Price stability is the bank's chief goal; low inflation suggests the economy is weak and makes it harder for indebted countries such as Greece to recover.

To achieve that, the ECB is currently buying 60 billion euros in government and corporate bonds a month, up to a total of 1.1 trillion euros. And Draghi mentioned that the current rate on funds deposited by banks could be cut further. That rate is already negative at minus 0.2 percent. Markets are already expecting a cut in the deposit rate by around 0.15 percentage point, says analyst Carsten Brzeski at ING-DiBa in Frankfurt. Estimates range from 0.10 point to 0.20 point. So to exceed expectations, Draghi would need something like a cut of 0.20 percentage point, or more.

A cut in the deposit rate has several effects that could help stimulate the economy. It would increase the amount of safe bonds available for the ECB to buy, since currently the central bank cannot purchase bonds yielding less than its deposit rate. It would push banks to lend money instead of hoarding it at the ECB.

Perhaps most important of all, the negative deposit rate is seen as tied to the euro's exchange rate to the dollar. That is because the lower rates go in the eurozone, the less people want euros to buy fixed income investments. That lessens demand for euros and sends its exchange rate lower. It helps exporters and helps the ECB raise inflation by making imports more expensive. And that's particularly so against the dollar, since the U.S. Federal Reserve is widely expected to make its first rate increase in years at a Dec. 15-16 meeting.
RELATED TOPICS