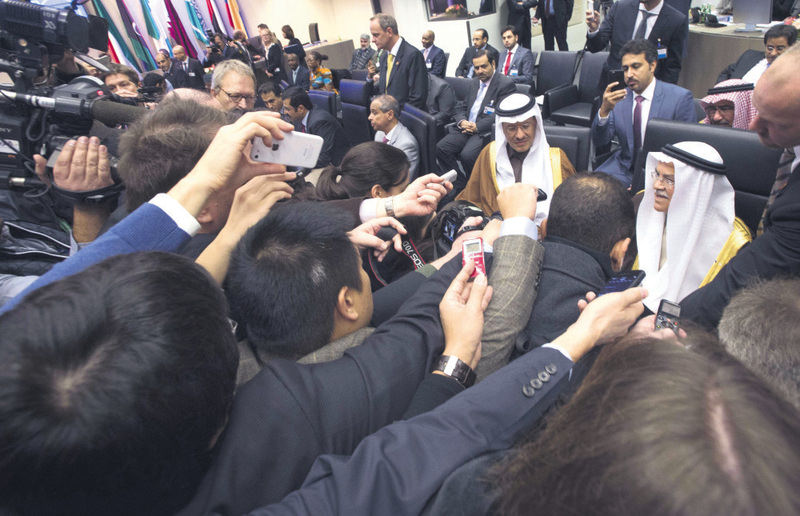 by Dec 05, 2015 12:00 am
OPEC maintained its policy of pumping near-record volumes of oil at a meeting on Friday, according to sources at the group, taking no steps to reduce one of the worst crude gluts in history which has driven down prices. The group, which produces a third of global oil, decided to increase its collective output ceiling to 31.5 million barrels per day (bpd) from the previous 30 million, the two OPEC sources said, in a move that effectively acknowledged that members are pumping well in excess of the current ceiling.

Benchmark Brent oil futures - which are near a six-year low - lost nearly $2 on the news, falling 1.5 percent to trade slightly above $43 a barrel by 1455 GMT. It was not immediately clear if rejoining member Indonesia, which produces 0.9 million bpd, was included in the new ceiling. One source said Indonesia was not included. Either way, the decision failed to address growing global supply.

The poorer members of the Organization of the Petroleum Exporting Countries (OPEC) have been piling pressure on its wealthier members, led by Saudi Arabia, to curb supply. But Riyadh and its Gulf allies decided on Friday to stick to their strategy of defending market share, hoping that lower prices would ultimately drive higher cost producers, such as U.S. shale oil firms, out of the market.

The Saudis have previously said they would be prepared to consider a cut only if OPEC members Iraq and Iran agreed to cooperate and non-OPEC members such as Russia joined in. But Moscow repeated this week it saw no chance of joint action, and Iran and Iraq on Friday also showed no willingness to curb supply.

Iranian oil minister Bijan Zangeneh said before the meeting that Tehran would be prepared to discuss action only when his country reached full output levels, if and when Western sanctions on the country are lifted next year.

Iraqi oil minister Adel Abdel Mahdi said his country would further raise output next year after having steeply increased production in 2015. Saudi oil minister Ali al-Naimi said he hoped growing global demand could absorb an expected jump in Iranian production next year: "Everyone is welcome to go into the market".

Iran has repeatedly said it would boost production by at least 1 million bpd when sanctions are lifted. This would add to the global glut as the world is currently already consuming up to 2 million bpd less than it is producing. The Iraqi oil minister said his country would further raise output next year after having steeply increased production in 2015.

While the Saudis can claim a partial victory over the U.S. shale oil boom, production from top non-OPEC rival Russia continues to surprise on the upside and world oil stockpiles are at record levels. For Saudi Arabia, low oil prices and the prospects of big fiscal deficits have already prompted officials to float the idea of potentially unpopular reforms, including introducing a value added tax and cutting energy subsidies.

Reduced oil revenue is also causing some of the influential business class to push Riyadh to quickly seek an end to its expensive war in Yemen, the kingdom's biggest strategic gambit in decades, and one that defines King Salman's foreign policy. However, while it has made steps to cut excess expenditure, the government has indicated it will use its vast foreign reserves and low debt levels to keep capital spending high in coming budgets to maintain private-sector growth.

A report in newsletter Energy Intelligence suggested this week the Saudis might be ready to fine-tune policies and could start pushing for a global deal to curb supply in order to avoid oil prices remaining low for longer. But Naimi said on Friday the report was "baseless".

OPEC abandoned production quotas for individual members several years ago and most members have been producing as much as they want. Russian energy minister Alexander Novak said on Thursday OPEC should bring its production levels close to reality.

Bringing the ceiling in line with real production could help bridge the gap in views between OPEC and non-OPEC. The two had last cooperated almost 15 years ago to cut output and prop up the prices following the 1998 financial crisis.