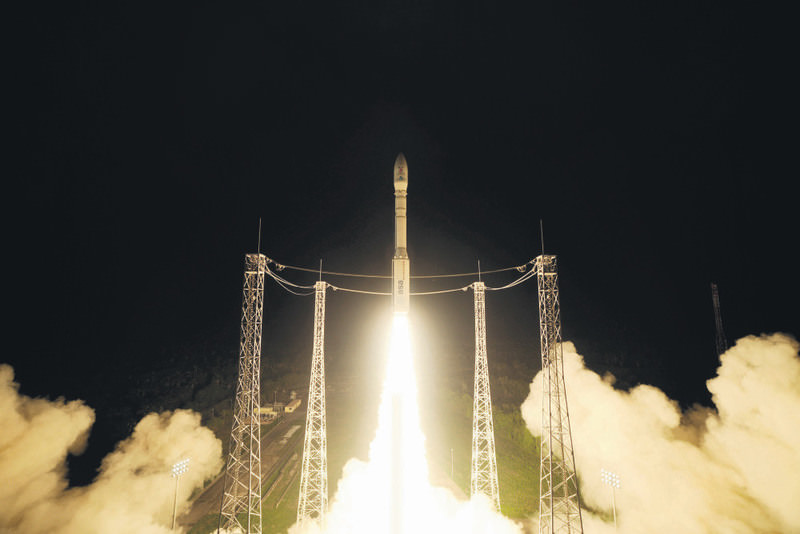 As Turkey readies for its first 100 percent national satellite project, which has been under construction since Dec. 2014, The Satellite, Space and Technology Days gathers sector giants together in Istanbul

"The Satellite, Space and Technology Days," powered by TÜRKSAT, will serve as a platform for international firms and local firms to share their know-how to support start-ups in Turkey in the satellite industry, including the first 100 percent national satellite - TÜRKSAT 6A - a giant leap which will turn Turkey into one of the only countries that can produce, test and launch its own national satellites.

TÜRKSAT 6A is the first 100 percent national satellite project which has been under construction since Dec. 2014 after protocol was signed between the Ministry of Transportation, Maritime and Communication, the Scientific and Technological Research Council of Turkey (TÜBİTAK) and TÜRKSAT - Turkey's national satellite operator. While the construction of the satellite is expected to take around three years, the whole process will extend over five years together with the research and development processes.

While the domestic participation to TÜRKSAT 5A and 5B satellites was 25 percent, 100 percent of the TÜRKSAT 6A satellite is anticipated to be covered through national means. It will be launched after the 5A and 5B satellites and will create a national network of satellites worth around $1 billion. Therefore, the successful completion of the 6A Project, assumed by ASELSAN, TÜBİTAK Uzay, Turkish Aerospace Industries (TAI) and C Tech, will mark a cornerstone in Turkish space and satellite technologies.

The event will demonstrate the technological and scientific revolution and visionary projects developed within the last decade. The first broadcasting from the TÜRKSAT 4B Satellite will be actualized during its inauguration which will be streamed via 4K teleconference, featuring the latest images of the ongoing construction of Istanbul's third Bosporus Bridge, its third airport and the İzmit Bay Bridge. Also, the TAI Satellite Test Center in Ankara will participate in the live broadcast.

While the projects at the turn of the millennium were highly direct procurement projects, Turkey has undergone a revolution in high, advanced and strategic technologies and various sectors; namely, its economic trading sector which has been developing export-related strategies since 2004. The key sector which shows concrete evidence of technological expansion, is undoubtedly Space and Satellite Technologies. Therefore, the event will focus on extending TÜRKSAT's global capabilities and increasing its global PR value, establishing a national network of satellites, building a brand through the "e-devlet" online services, improving sector relations and business development of How to Do Business With TÜRKSAT and TÜRKSAT Informatics.

Sixty-five national and international companies, including companies from Japan, the U.S., U.K., Afghanistan, Poland, Sweden and the Netherlands, including global firms participating in TÜRKSAT's 5A and 5B satellite tenders will attend this one-and-only event which will bring together all stakeholders in Satellite and Space Technologies. MÜSİAD will become the biggest stakeholder in this national and international network to be set; moreover, the event will support TÜRKSAT's aim to build a fleet of 10 satellites by 2023.

The satellite sector is comprised of three phases. First, the construction and launching of the satellite; second, the regulatory mechanism regarding the satellite and third; the operation of a satellite after it goes into orbit. The first phase will be completed when the 5A and 5B satellites, with 25 percent of the national contribution, are commissioned. National support had also been provided for the core technologies of the Göktürk 2 satellite, which now provides critical strategic data to Turkey.

While France and Japan are the two main countries offering their services for the construction phase, all communication satellites prior to TÜRKSAT 4A and 4B had been performed by France, with Japan assuming construction of the 4A and 4B satellites. Russia, on the other hand, had been highly involved in launching operations.

In this respect, the turning point will be the construction and launching of TÜRKSAT 6A, which is considered an export item that will either be entirely constructed and launched on Turkish soil or with the alliance and cooperation of Turkey's allies.

In the next five years, the TÜRKSAT 5A and 5B satellites will create a network worth around $500 million, while the 6A satellite's network is expected to be worth around $300 billion. In these two operations, around $500 million will be covered locally and $500 million worth of exports will be prevented; meaning that around $1 billion will be located in this national network of satellites. It is estimated that the export value per kilogram of a 6A satellite will be around $100,000, if exported. Another crucial system is the positioning of satellite operators in the sector as Eutelsat, Ses Astra, Azer Cosmos, Yassat, Arapsat are competitors of television broadcasting and data in the same geographic region and Turkey which is home to TÜRKSAT.
RELATED TOPICS