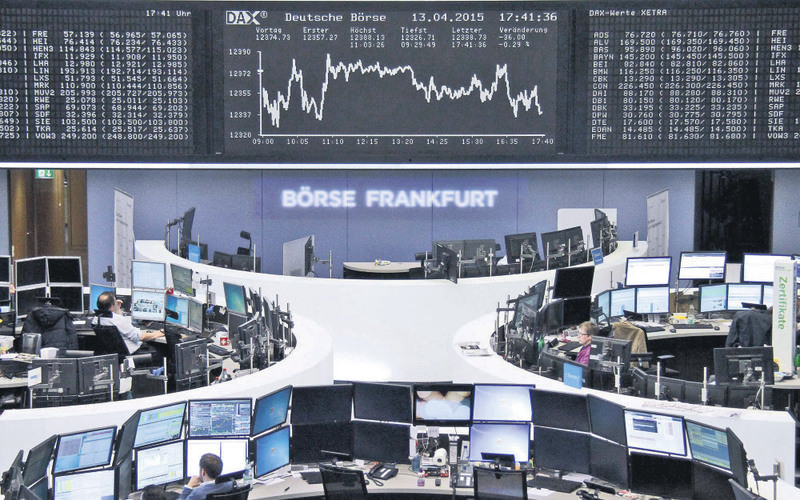 European shares decreased Wednesday to the two-month-low, as commodity stocks pressure. Investors remained cautious citing persistent concerns about a slowdown in China and uncertainty over the Fed rate hike this month

European shares fell Wednesday to their lowest level in more than two months, weighed down by a drop at pharmaceuticals group Bayer and more pressure on commodity stocks. The pan-European FTSEurofirst 300 index fell 0.5 percent to its lowest since late October, while the euro zone's blue-chip Euro STOXX 50 index also slipped by 0.4 percent.

Oil prices climbed back up on Wednesday as U.S. crude inventories dipped, while Japan posted rising machinery orders and copper prices also held their ground. "Ultimately I do feel it's still a commodities story, and while oil might have bounced back, a lot of that could be construed as short-covering... and an element of fear that perhaps it's gone too far down too soon," Brenda Kelly, head analyst at London Capital Group, said. Nevertheless, many investors were cautious, citing persistent concerns about a slowdown in China and uncertainty over the impact of a likely U.S. interest rate hike in December.

China is the world's biggest consumer of metals, and fears about a slowdown in the country have knocked back commodity stocks this year.

Data yesterday showed that China's consumer inflation picked up slightly in November but remained well under the government's 2015 price target of 3 percent, raising concerns that the world's second-biggest economy could be sucked into a Japan-style deflationary trap.

Miner Anglo American, which hit another record low earlier in the session, dropped 6.1 percent and was set for its seventh straight day of losses after a series of broker target cuts after the company's decision to suspend dividends and restructure its business. It was joined by silver miner Fresnillo, which fell 3.2 percent after a pipeline burst at its Saucito mine, spilling about 450 tons of tailings.

"I am taking a more defensive attitude now, and I have cut equities to neutral from overweight," said Francois Savary, chief investment officer at investment management firm Prime Partners. Among top performers on the STOXX 600 index, Ashtead climbed 7.3 percent after the industrial equipment hire group raised its profit expectations.

Auto stocks were also in focus as Volkswagen rose 7.7 percent after reporting that the number of cars affected by its carbon dioxide cheating was far fewer than feared, only 36,000 vehicles as opposed to 800,000. Shares in Porsche also rallied nearly 6 percent.