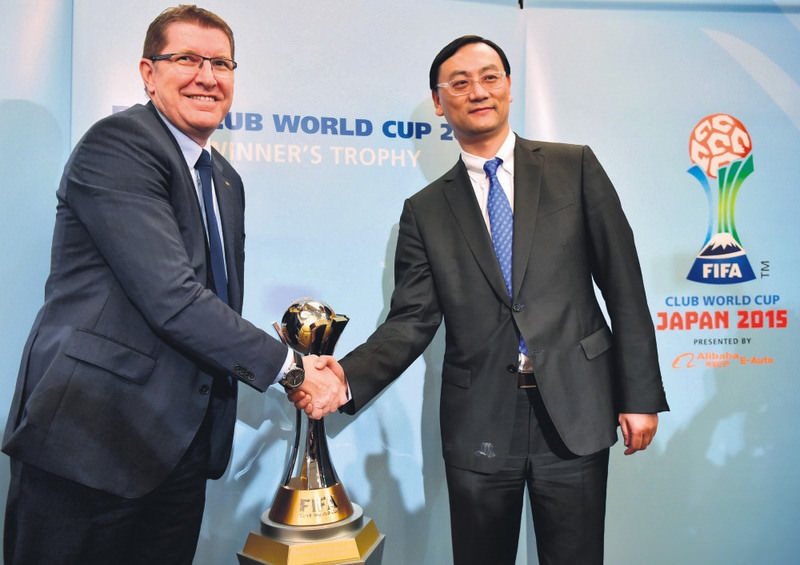 by Associated Press
Dec 10, 2015 12:00 am
FIFA signed its first major new sponsor on Wednesday after a gap of more than two scandal-filled years. Soccer's governing body announced an eight-year partnership deal with Alibaba E-Auto for the Club World Cup, starting this week. Alibaba E-Auto is the car manufacturing brand of Chinese e-commerce company Alibaba Group, the world's largest online and mobile commerce company. It's the first new sponsor contracted by FIFA since September 2013, when Russian state-controlled gas company Gazprom signed up only for the 2018 World Cup in Russia. "It is not easy to sell," FIFA marketing director Thierry Weil said at a news conference for the Alibaba deal. "You can imagine in the given period and given circumstance with what's going on at FIFA." New sales have stalled because of the corruption scandal which has engulfed FIFA. FIFA has 27 of its 34 sponsor slots vacant for the 2018 tournament, and 28 vacant for the 2022 World Cup in Qatar. FIFA typically sells two-tournament packages, and existing sponsors Visa and McDonalds renewed last year for 2018-2022. "We are in discussions with different companies but we are also realistic to say this will not change before the reforms will be approved from the Congress, and before a new president is elected on February 26," Weil said.

The failure to sign deals has led FIFA to forecast a $100 million loss this year, though it has cash reserves of more than $1.5 billion. FIFA's long-range budget called for $5 billion revenue for the 2018 World Cup, but that seemed a conservative figure when broadcasting deals with Al Jazeera and Fox far exceeded previous rights sales for the Middle East and United States, respectively. The value of the deal with Alibaba was not announced on Wednesday, but its branding will be all over both stadiums in Japan for the Club World Cup starting on Thursday.

FIFA's annual financial reports for 2013 and 2014 show revenue of $40 million from each Club World Cup in Morocco. "China is not a market which FIFA is strong in yet, to be honest," Weil said. "FIFA is especially looking into the market to help develop football in the market ... China cannot be neglected because it's a huge market."