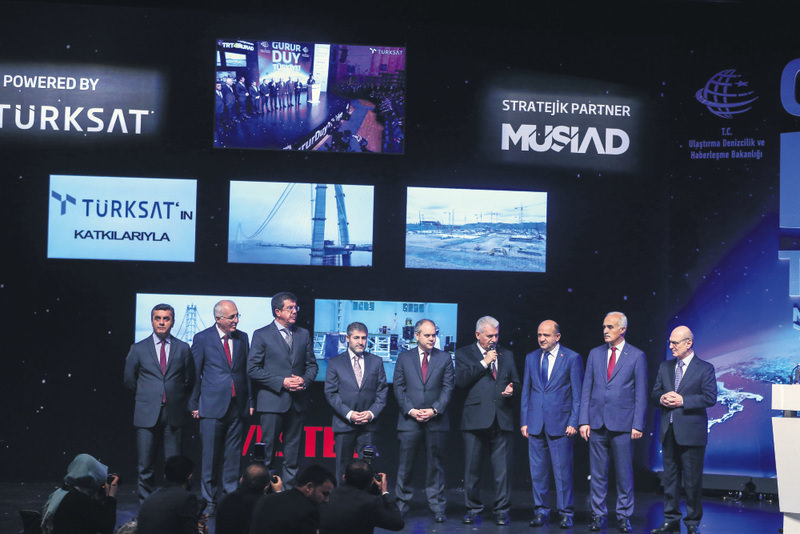 Transport Minister Yıldırım gave a precise date for the opening of Istanbul's third airport. Accordingly, the world's biggest airport will be officially inaugurated on Feb. 26, 2018

The first broadcast from the TÜRKSAT 4B Satellite was actualized during the inauguration, which was streamed via the 4K teleconference, featuring the latest images from the ongoing construction of Istanbul's third Bosporus Bridge, the third airport and the İzmit Bay Bridge. Also, the TAI Satellite Test Center in Ankara participated in the live broadcast.

People attending the ceremony were also witness to some amusing scenes, as Yıldırım maintained his "outspoken man" reputation. During the live broadcast of the third airport, Yıldırım asked the project's chairman Nihat Özdemir if he wants to say something as the "property owner" referring to the agreement giving operational rights to IGA for 25 years. The IGA, Havalimanı İşletmesi A.Ş. Consortium, includes five big construction companies, which won a tender held in May 2013 to build Istanbul's new airport. "Sorry, I mean long-term renter," added Yıldırım. The minister further asked Özdemir when the airport will start to operate. Özdemir said that they expect the first flight to arrive in the first quarter of 2018. The minister, who has 13 years of experience, set the date for the opening as Feb. 26, 2018. The original plan for the project was set for the second half of 2018, which was later changed by IGA, noting that the project will be completed six months earlier than planned.

The airport will have 165 passenger jetways, four terminals connected with a railway system, three maintenance buildings, eight air traffic control towers, six runways, 16 taxiways, a 6.5 million-square-meter airport hangar with a capacity of 500 airplanes, an approximately 70,000 vehicle capacity parking area - touted as the largest airport parking lot in Europe - a clinic, fire department, hotels, a convention center and recycling and waste disposal plants. The airport will also host 150 airlines. The airport will be connected to the Istanbul metro, and multi-lane highways will be built to facilitate access. The area where the airport is being built was chosen after the ecological balance, wind data and the natural and artificial obstacles of the region were taken into consideration.
RELATED TOPICS