Ukraine halts payment of $3B debt to Russia 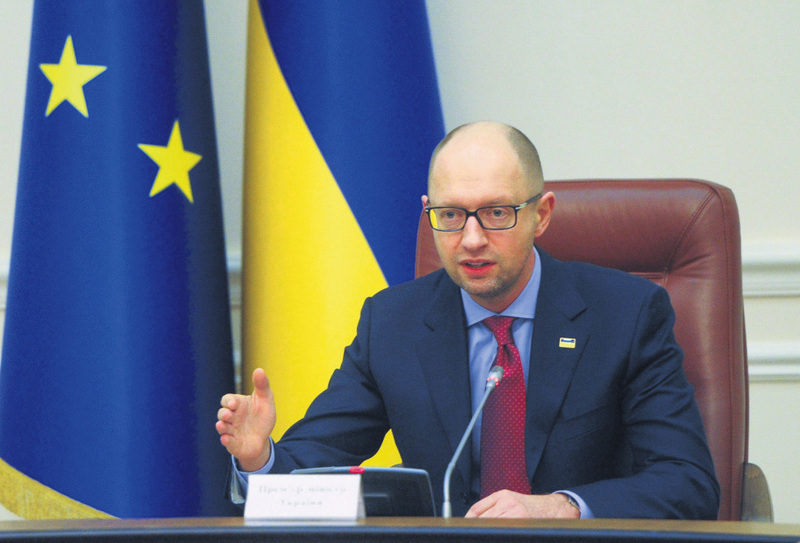 Ukrainian Prime Minister Arseniy Yatsenyuk at his cabinet meeting in Kiev on Friday. Ukraine declared a moratorium on paying back the $3 billion it borrowed from Russia in 2013, Yatsenyuk told his cabinet of ministers.
by Dec 19, 2015 12:00 am

On Friday, Ukraine announced its default on $3 billion Russian debt. While Russia wants to resort to legal measures, threatening to bring Ukraine to court, it is still not clear whether the International Monetary Fund will intervene with a bailout package

Ukraine announced on Friday it would not make a payment on its $3 billion debt to Russia due this weekend, deepening a row with Moscow, which said it would take Kiev to court. The announcement essentially confirmed that Kiev will default on the bond come Sunday and unleash a protracted legal battle, although the immediate implications for its much-needed bailout package from the International Monetary Fund (IMF) were unclear.

Speaking at a government meeting, Prime Minister Arseniy Yatsenyuk said that Ukraine "is imposing a moratorium on repaying the so-called Russian debt."

"From today we are halting payments on this debt," he said. "I stress, once again, that we are ready for a legal process with the Russian side."

Russian President Vladimir Putin last week ordered his government to sue Ukraine if it defaults on the bond, after Moscow said that Kiev rejected its offers of debt restructuring. Ukraine's default "could obviously complicate Ukrainian access to international financial markets," although it was difficult to tell to what extent, said Oleg Kuzmin, the economist in charge of Russia at the Commonwealth of Independent States (CIS) at Renaissance Capital investment bank.

Moscow and Kiev have been locked in a bitter showdown over Russia's $3 billion loan granted to the pro-Moscow regime of ousted Ukrainian President Viktor Yanukovych in December 2013, not long before he fled to Russia. Ukrainian authorities insist that it is not a sovereign loan by one state to another, but rather a transaction made via financial markets and subject to terms agreed with other creditors. Kiev had reached a restructuring deal in August with its private creditors, including major banks and investment funds, which agreed to a 20 percent cut in their claims. Moscow, however, maintains that the loan cannot be considered private debt and has refused such conditions, instead offering to spread out the payment over three years and asking the IMF to pitch in.

The IMF this week agreed with Moscow that the bond consists of an official loan.

"Russia has refused, despite our repeated attempts to sign the agreement for restructuring, to accept our proposals," Yatsenyuk said.

Cash-strapped Kiev is in dire need of further international funding and was required by the IMF to restructure $15.3 billion of debt to unlock the next installment of the $17.5 billion aid package. After the IMF changed its rule on debt this month to make it possible to provide funding to a country that is in arrears to an official creditor, Kiev is more confident that the disagreement with Moscow poses no risks to its aid plan. The country's Finance Ministry on Friday said that it expects that the new rule "will allow the IMF to continue financing Ukraine" despite Kiev's position on the bond and suspension of payment.

"Ukraine does not risk much by not paying its debt to Russia on time," said Taras Kotovych, a financial analyst in the investment group Capital Ukraine. Despite this, a default "does feed into broader concerns that the country's IMF program is now at risk," William Jackson, senior emerging markets economist for Capital Economics, said in a research note. "In terms of what today's news means for the country's IMF bailout, the implications are unclear as yet," he wrote, as the IMF decision also requires "the debtor's good faith efforts" to reach a deal. "It's not difficult to envisage any debt talks breaking down," he added.
RELATED TOPICS