WTO talks in Nairobi end with breakthrough on farm subsidies 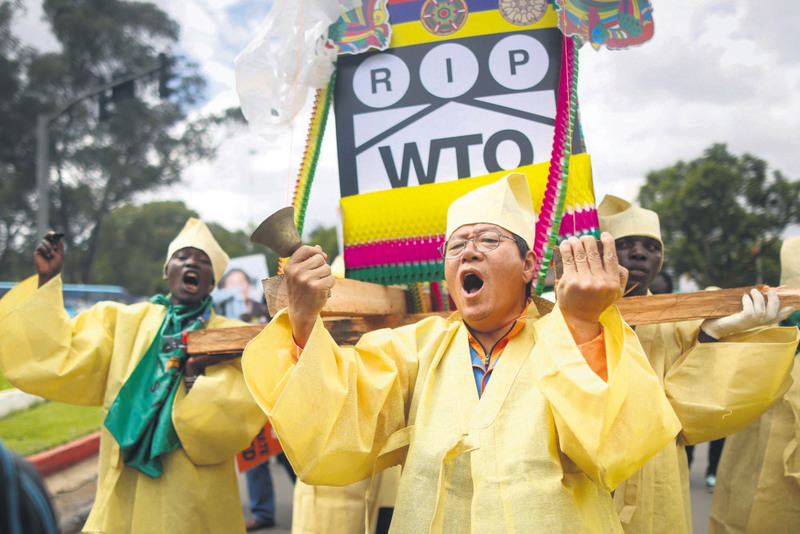 by Dec 22, 2015 12:00 am
World Trade Organization (WTO) member countries agreed to abolish agricultural export subsidies after five days of talks in Nairobi, Kenya, but failed to make progress on the long-stalled Doha Round of negotiations aimed at lowering global trade barriers. The 162-member body, meeting in Africa for the first time, on Saturday said a deal had been reached on the issue of farm export subsidies, with developed nations committing to remove their subsidies immediately and developing nations set to eliminate theirs by 2018.

WTO Director General Roberto Azevedo in a statement hailed the agreement as the "most significant outcome on agriculture" in the organization's 20-year history. U.S. trade representative Michael Froman said the deal would "help level the playing field for American farmers and ranchers. The WTO's actions in this area will put an end to some of the most trade distorting subsidies in existence and demonstrates what is possible when the multilateral trading system comes together to solve a problem." The European Commission (EC) also praised the "landmark deal" as "good for fairer global trade." "For those who had doubts, it proves the relevance of the WTO and its capacity to deliver results," EU Trade Commissioner Cecilia Malmström said in a statement.

But the conference failed to mend stubborn divisions between poor and rich nations over how to overcome the Doha deadlock and even an additional, unscheduled fifth day of meetings in the Kenyan capital did nothing to end the impasse. The final declaration adopted Saturday said "many members" reaffirmed their "full commitment to conclude" the Doha Development Agenda goals. But it added: "Other members do not reaffirm the Doha mandates, as they believe new approaches are necessary to achieve meaningful outcomes in multilateral negotiations ... Members have different views on how to address the negotiations," it said.

The Doha Round of trade negotiations was launched to great fanfare in the Qatari capital in 2001 with the aim of helping developing countries grow through improved trade access. But since then, industrialized and developing nations have time and again failed to agree on the level of cuts on industrial good tariffs and agriculture subsidies. The Nairobi gathering also agreed on a timetable for implementing a deal on getting rid of import duties on 201 high-tech products, whose annual trade is estimated at more than $1.3 billion a year. Two new countries, Liberia and Afghanistan, joined the WTO club this week, bringing the total number of members to 164.
RELATED TOPICS