Istanbul’s 3rd bridge over Bosporus to become operational by May 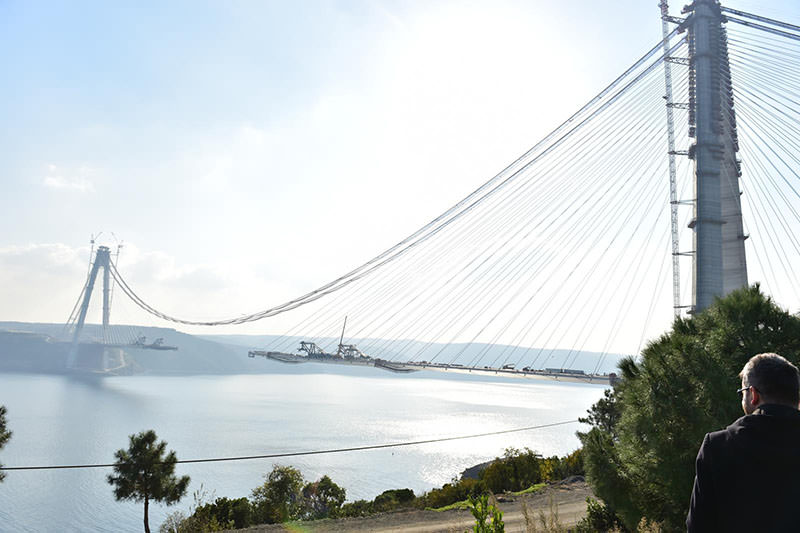 | IHA photo
by Daily Sabah Dec 23, 2015 12:00 am
The Yavuz Sultan Selim Bridge, the third bridge over the Bosporus in Istanbul, will begin service starting in April or May of 2016, said the Minister of Transport, Maritime and Communication Binali Yıldırım on Tuesday.

Construction of the bridge is about 88 percent completed, Yıldırım said, who further added that the bridge will ease Istanbul's traffic, which has seen an enormous jump in the number of vehicles, especially in the last years.

Yıldırım said that in the last 12 years, the number of vehicles has increased from 8.5 million to 20 million, pointing out the effect of this on road accidents. He said, within this period, the number of traffic accidents has increased threefold, whereas the annual road fatality rate has decreased by 63 percent thanks to a more successful standardization of the roads.

Thousands of employees and engineers work ceaselessly 24 hours a day in the construction of the Yavuz Sultan Selim Bridge. The total length of the bridge is 2,164 meters.

The bridge, which has a length of 1,408 meters over water, has eight lanes of highway and two lanes of railway. It will be the longest suspension bridge in the world that features a rail system. The height of the tower in Garipçe village on the European side is 322 meters and the other tower in Poyrazköy district on the Asian side is 318 meters high. The bridge will be the highest in the world in terms of the height of its abutments.

The rail system that crosses the bridge will run from Edirne to İzmit, will be integrated into the Marmaray and Istanbul Metro and will connect Istanbul Atatürk International Airport, Sabiha Gökçen International Airport and the third airport.
Last Update: Dec 24, 2015 11:41 am
RELATED TOPICS