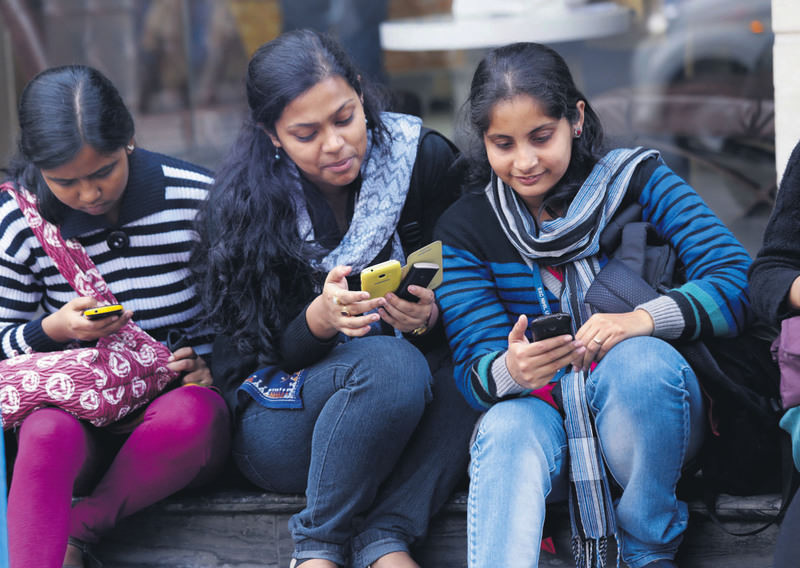 by French Press Agency - AFP Jan 01, 2016 12:00 am
India notched up its billionth cellphone subscriber in October, the country's telecommunications regulator said, underscoring the importance of its fast-growing mobile market, the world's second-largest after China. Cellphone subscriptions have boomed in India in recent years as aggressive cost-cutting by providers has driven down prices, leading to some of the cheapest tariffs in the world.

The number of mobile subscribers rose nearly 7 million in October from the previous month to surpass 1 billion, the Telecom Regulatory Authority of India said Wednesday, hitting a milestone that China reached in 2012. "It is a matter of great pride for us. It shows an empowered India and an engaged India and a tech-savvy India," Communications and IT Minister Ravi Shankar Prasad told the Times of India newspaper.

"It will mean more data, more government-to-government connectivity, more broadband," he said. The figures do not indicate that India has 1 billion individual cellphone users, however, as many people have more than one connection. And in poorer Indian states such as Bihar, "teledensity" - the penetration of telephone connections for every 100 people - is as low as 54 percent, the telecoms regulator said. For many people in India a cellphone represents their sole means of accessing the Internet, as smartphones leapfrog desktops as the most common way of getting online.
Last Update: Mar 24, 2016 12:18 pm
RELATED TOPICS