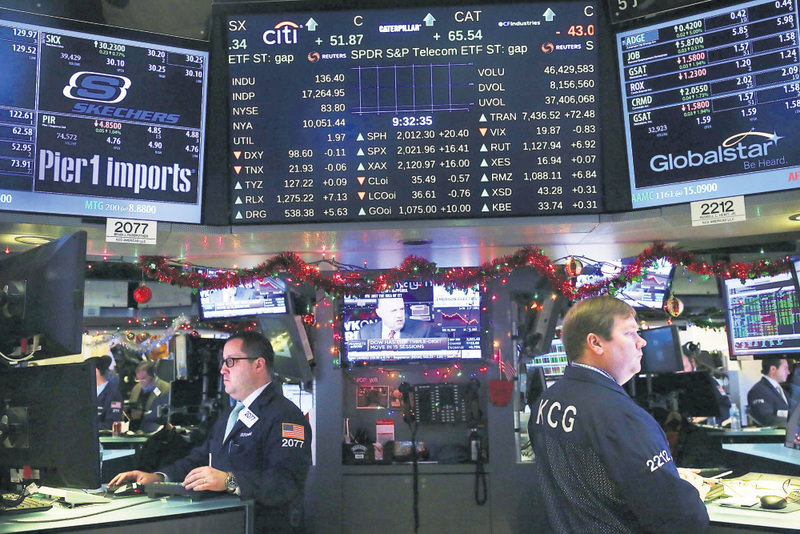 Backed by easy monetary policies, developed countries` equities end the year at record-high levels while those most negatively affected from the global slowdown and low oil prices were emerging markets

Stock markets in developed economies were set to record their fourth straight year of gains on Thursday while oil prices cemented losses of more than 35 percent as a roller-coaster year drew to a close.

Ultra-easy monetary policy and pockets of economic resurgence have helped equity valuations break new ground this year. U.S. stocks are finishing 2015 near record highs, European equities have hit all-time peaks and Japanese shares have risen to levels not seen since the turn of the century.

With China's slowdown and sliding oil prices troubling emerging markets, and global bonds on edge as the United States experiments with its first rate rise in nearly a decade, these shares are seen as among the best bets for investors.

In Europe, where the ECB is pumping more than a trillion euros into the economy, stocks were down 0.2 percent on Thursday but on track for a 7 percent gain on the year.

Analysts expect the pan-European STOXX 600 index to nudge above the 400 mark by the end of 2016. Even if they may not return to this year's highs of 415, that would mark a gain of some 10 percent from current levels.

"European stocks are still probably the best choice in a limited range of options," said Darren Sinden at Admiral Markets. "There's not much incentive to hold bonds, and the U.S. is at the tail-end of a bull run, so it's hard to justify putting your money there."

Japan, like the euro zone, is well entrenched in monetary easing. Tokyo's Nikkei index, which was closed on Thursday, finished the year up around 9 percent.

But elsewhere in Asia, markets have been hit by worries about China, the world's second largest economy, and oil prices which slumped near 11-year lows.

MSCI's broadest index of Asia-Pacific shares outside Japan was up slightly on Thursday but has shed nearly 12 percent this year. Broader emerging market stocks are down 17 percent in 2015.

The outperformance in European and Japanese equities has a lot to do with a strengthening dollar, which has weakened their currencies over the last few years and made their exporters more competitive.

The euro was down 0.1 percent on Thursday, on track for a fall of nearly 10 percent against the dollar in 2015.

Against a basket of major currencies in 2016, the greenback has gained 9 percent with a rebounding jobs market convincing the Federal Reserve to 'lift off' earlier this month. It was broadly flat on Thursday. Currency strategists predict the dollar will add another 4 percent next year, with policymakers' enthusiasm for further rate hikes in the world's largest economy likely to be tempered by the drag of a strong dollar on corporate earnings. While U.S. stocks are just off record highs, they rose only 0.2 percent this year but are tipped for growth next year of around 6 percent.

Moreover, the slide in oil has been the standout in 2015. Brent crude gained 0.4 percent to $36.60 on Thursday, after a 3.5 percent drop in the previous session. It's set for a slump of nearly 37 percent for 2015, having shed 48 percent in the previous year, as a global supply glut shows no sign of abating.

Some analysts like Goldman Sachs say prices as low as $20 per barrel might be necessary to push enough production out of business and allow the market to rebalance.

Combined with a stronger dollar, this trend has crushed commodity currencies. The dollar hit a more than one-year high against Russia's rouble on Thursday, and its highest in at least 13 years against the Norwegian crown the previous day.

Among widely-trade currencies, the five worst performers this year have included the Brazilian real, with losses of around 30 percent versus the dollar, the South African rand, Turkish lira and the rouble.

In debt markets, German bonds ended their most volatile year since 2011 with yields higher than they were at the end of 2014, showing the limitations of ultra-easy monetary policy with global disinflationary forces at work. Ten-year yields closed at 0.63 percent on Wednesday, up 9 bps on the year and far from record lows of 0.05 percent touched in mid-April.

Forecasts for the end of 2016 range anywhere between 0.10 and 1.70 percent. "Quantitative easing will go on but should not be a big reflation story. We are still in a structurally low yield environment but at slightly higher levels," Commerzbank strategist David Schnautz said, predicting yields to hit 0.90 percent by the end of next year.
Last Update: Jan 01, 2016 1:09 am
RELATED TOPICS