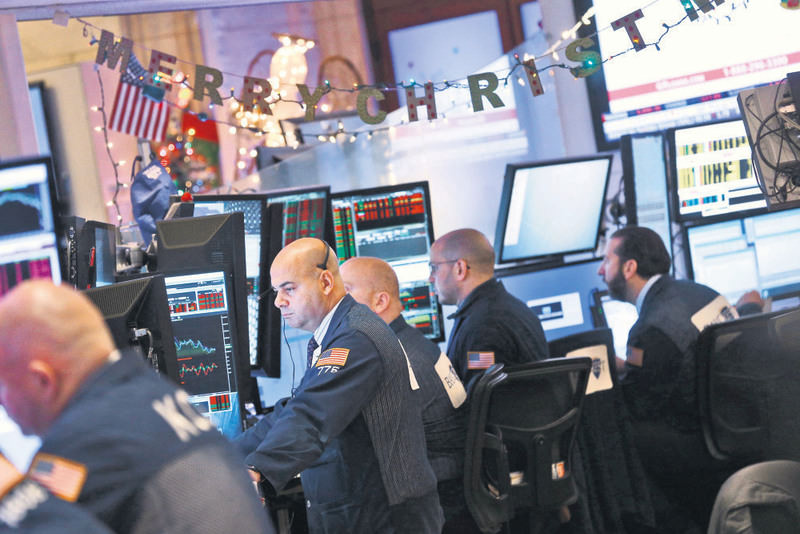 Traders work on the floor of the New York Stock Exchange (NYSE), with the sign ,Merry Christmas, in the background, at the start of the trading day in New York, on Jan.4.
by Daily Sabah with AP Jan 06, 2016 12:00 am

Stock markets in the U.S. and Europe started 2016 with major losses following Shanghai's dive on Monday. Losses resumed on Tuesday in European markets, showing no sign of recovery

U.S. stocks dived 1.5 percent on average on Monday, marking its largest decline on the first trading day in 84 years, whereas the DAX index in Germany tumbled more than 4 percent, after a plunge in Chinese markets triggered by weak Chinese manufacturing data and escalating tensions in the Middle East between Saudi Arabia and Iran.

The Shanghai Composite Index dived 6.9 percent to its lowest level in nearly three months. The drop led the Shanghai and Shenzhen stock markets to halt trading for the remainder of Monday to avert steeper falls, the official Xinhua News Agency said.

It was the first time China used the "circuit breaker" mechanism it announced late last year. Chinese authorities have been trying for months to restore confidence in the country's stocks after a plunge in prices in June rattled global markets and prompted a panicked, multibillion-dollar government intervention. Beijing is gradually unwinding emergency controls that included a freeze on new stock offerings.

Concerns about China's economic slowdown were revived by weak manufacturing data released Monday, along with Middle East tensions, which pushed up oil prices.

"The market is trying to anticipate the global growth story," said Kevin Kelly, CEO of Recon Capital Partners. He added, "It's going to be a turbulent year. This isn't a blip."

The jitters extended to Europe. The DAX index in Germany, whose export-led economy is sensitive to the fortunes of China, tumbled 4.3 percent. Britain's FTSE 100 fell 2.3 percent while France's CAC 40 dropped 2.8 percent.

The Caixin/Markit index of Chinese manufacturing, which is based on a survey of factory purchasing managers, fell to 48.2 points in December from 48.6 the previous month, marking a contraction for the tenth straight month. It was the latest sign of the headwinds facing the Chinese economy that add to a dismal outlook for Asian exporters. On Friday, an official manufacturing index also showed a persistent contraction in factory activity despite Beijing's stimulus measures. Escalating tensions in the Middle East worried investors and briefly sent the price of oil higher. Saudi Arabia said Sunday it is severing diplomatic relations with Iran, a development that could potentially threaten oil supply. The world's largest oil supplier executed a prominent Shiite cleric that prompted protesters to set fire to the Saudi Embassy in Tehran and led Iran's top leader to criticize Saudi Arabia.

The benchmark for U.S. crude gave up an early gain and was down slightly in late morning trading in New York. Oil was down 30 cents to $36.70 a barrel in New York Mercantile Exchange. It traded over $38 a barrel earlier in the day. Brent crude, which is used to price international oils, remained relatively unchanged at $37.27 a barrel in London.

Oil and gas producers, which were battered last year, were among the few stocks in the S&P 500 to rise. Southwestern Energy climbed 21 cents, also 3 percent, to $7.31 and Consol Energy rose 6 cents, or 1 percent, to $7.96. In other trading, some of the biggest decliners in the U.S. were companies that sharply outpaced the market last year. Netflix and Amazon, both of which more than doubled in price in 2015, were down sharply. Netflix sank $6.98, or 6 percent, to $107.43 and Amazon gave up $34.63, or 5 percent, to $640.14. On the whole, technology was the weakest among the 10 sectors in the S&P 500 index. It was one of the better performing industries in the market last year.

Global stock markets were weaker on Tuesday, even as China's benchmark stabilized a day after plunging nearly 7 percent.

Global stocks started the New Year on a grim note as poor manufacturing reports from China and the U.S. triggered fears about waning growth around the world. The steep fall in Chinese markets on Monday prompted authorities to halt trading by using a new "circuit-breaker" mechanism for the first time.

"The moves seen in the Chinese stock markets are quite concerning," said Angus Nicholson, market analyst at IG in Melbourne, Australia. Technical indicators "point to a likely renewed sell-off and a revisit of the late-August lows," he said in a market commentary.

Tensions in the Middle East also unnerved investors. Saudi Arabia severed diplomatic relations with Iran over the weekend in a dispute over the Saudis' execution of a Shiite cleric. Concerns about a potential threat to the world's oil supply caused a spike higher in oil prices. Benchmark U.S. crude was up 4 cents to $36.80 per barrel in electronic trading on the New York Mercantile Exchange. The contract fell 28 cents to close at $36.76 a barrel on Monday. Brent Crude, the international standard, lost 5 cents at $37.18 per barrel in London. In currencies, the dollar slipped to 119.09 yen from 119.43 yen on Monday. The euro weakened to $1.0775 from $1.0826.
RELATED TOPICS