Super Bowl estimated to generate $20B in one night 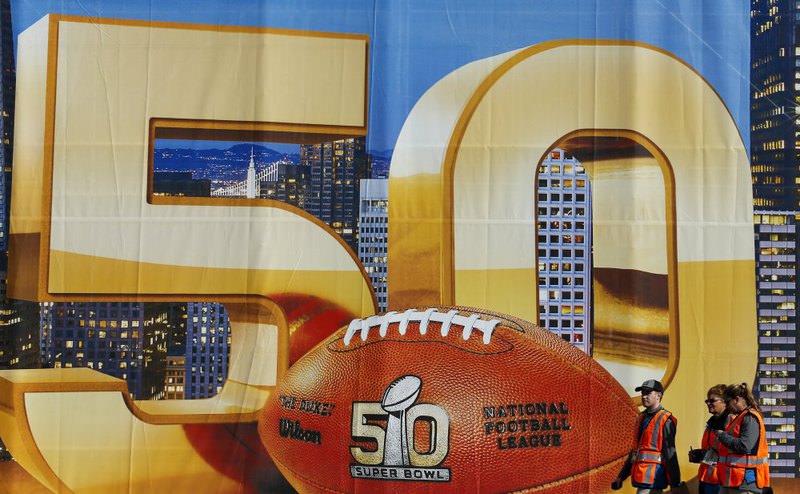 The Super Bowl, the championship game of the National Football League, which happened for the 50th time this year, is expected to generate $20 billion and become the most profitable sporting event in history

Super Bowl 50, the final game of the season in the National Football League (NFL), is expected to contribute more than $20 billion to the U.S. economy. The Denver Broncos, the football team from Denver, played the Carolina Panthers in Santa Clara, California's Levi's Stadium last night. The Super Bowl showdown, which brought life to a standstill in the United States for four hours, created great dynamism in many sectors, particularly in the retail sector, and brought in billions of dollars to the country's economy.

According to estimated data compiled by Anadolu Agency from the U.S. National Retail Federation (NRF), each person spent $82.19 on average, adding up to $15.5 billion as part of Super Bowl 50, which creates a festival-like atmosphere across the country every year. During last year's event, spending stood at $77.88 per person on average, a total of $14.3 billion.

This year, around 189 million Americans watched the final game, and a total of 20.9 million new products, including 8.6 million televisions, were sold.

According to data from the research company Technomic, an estimated nearly 14.5 million pizzas, 1.3 billion chicken wings and 1.2 billion liters of alcohol were consumed during the event, when the largest amount of food and beverage is sold (after Thanksgiving Day).

Also, ticket prices for the event at the 75,000-seat Levi's Stadium set a record. Data released by StubHub, the U.S.'s most popular online ticket sales website, indicate that ticket prices for the match reached $4,821 on average and made history as the highest prices paid for a sports event in U.S. history.

So far, the most expensive tickets for a Super Bowl match were sold for $3,649 on average for the Green Bay Packers-Pittsburgh Steelers match in 2011. The NFL announced that StubHub sold more than 5,000 tickets at least for nearly $3,000 for the game in which the season's most successful defensive team, the Denver Broncos, competed against the most successful offensive team, the Carolina Panthers. The most expensive ticket for the competition was sold for $20,500 to a football enthusiast from San Jose, California. It is estimated that this figure might have increased to $25,000. Those who came to Santa Clara to watch the game at the stadium are estimated to have spent $7,300 individually on average, including transportation and accommodation expenditures.

By agreement with the NFL, NBC, CBS and Fox take turns airing Super Bowl games. Last night's game was broadcast by CBS, which asked for $5 million for each 30-second commercial aired during the four-hour game. This was the highest fee ever asked by a TV network. Last year, NBC asked $4.5 million for each advertisement of the same length and generated nearly $345 million. CBS is estimated to have taken in $385 million in commercial revenues during Super Bowl 50 in which the U.S.'s most famous singers and players took part.

Also, Coldplay, Beyoncé and Bruno Mars performed during the halftime show. American singer Lady Gaga sung the national anthem at the beginning of the contest.

Super Bowl 50 brought a business volume of more than $20 billion, including product sales, commercial revenues and ticket sales. However, it accompanied some expenditure as well, with the NFL spending nearly $3.6 billion for the game in Santa Clara. In addition, for those who came to the city, one-week events were organized in San Francisco, which is one hour away from Santa Clara. It is estimated that additional public services, such as security and transportation needed for various events, cost $5 billion for the city administration.
RELATED TOPICS