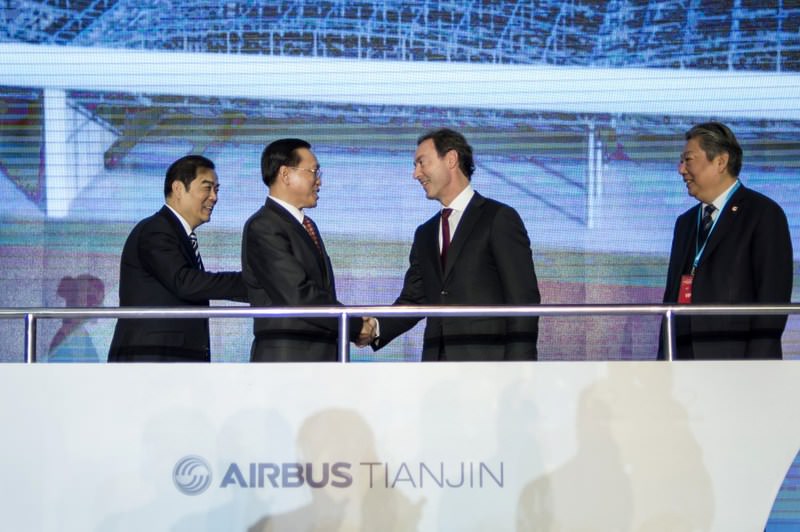 Europe's largest aircraft manufacturer, Airbus, started construction Wednesday on a new facility to deliver wide-body planes in China, as it faces off against bitter U.S. rival Boeing for market share in the world's second-largest economy. At a ceremony in the northern port of Tianjin, Airbus CEO Fabrice Bregier and Chinese officials officially broke ground for the completion and delivery center that will produce two A330 planes per month. The center is an expansion of the firm's existing final assembly plant for A320 single-aisle aircraft in the city.

It comes with China's economic growth at its weakest in a quarter of a century and concerns over its outlook sending shivers through global stock exchanges. However, Bregier said: "This is not true for our market," adding that increased middle-class incomes and easing visa rules were driving a boom in Chinese air travel.

The world's second-largest economy is already Asia's biggest aircraft buyer as a growing middle class takes to the skies in ever-increasing numbers. The country is forecast to have 1.7 billion air passengers by 2034 and is poised in the next two decades to become the largest civil aviation market in the world.

The new $150 million center is the company's first such facility for wide-body aircraft outside Europe and "marks a new milestone for Airbus' international footprint," Bregier said. It will take flyable unpainted aircraft from their headquarters in Toulouse, France, and add cabins, furnishings and paint, before they are delivered to customers. Boeing also plans to open a completion center in China, it announced last year. The company sold 300 aircraft worth a record $38 billion during President Xi Jinping's visit to the U.S. in 2015.

The two firms have been in a fierce battle for market share in China where Airbus says it has gone from 27 percent in 2004 before it opened the Tianjin final assembly line to roughly 50 percent today.

The country is now Airbus' largest market, accounting for nearly a quarter of the planes it delivered in 2015. Days before the groundbreaking, Air China announced orders for 12 wide-body aircraft for $2.9 billion.

"I understand that our competitor is trying to mimic the Airbus strategy by opening a facility," Bregier said in Tianjin, but added: "It's not really state-of-the-art."

A Boeing spokesman retorted: "Partnership is defined by more than a few buildings," calling its relationships in the country "second to none" in supporting the development of Chinese aviation. Beijing has made building up its aerospace industry a strategic priority, considering it a crucial component of an advanced economy. Investing in new plants in China is not only a way to increase production, but also a way to win the approval of the government, which controls the airline industry.