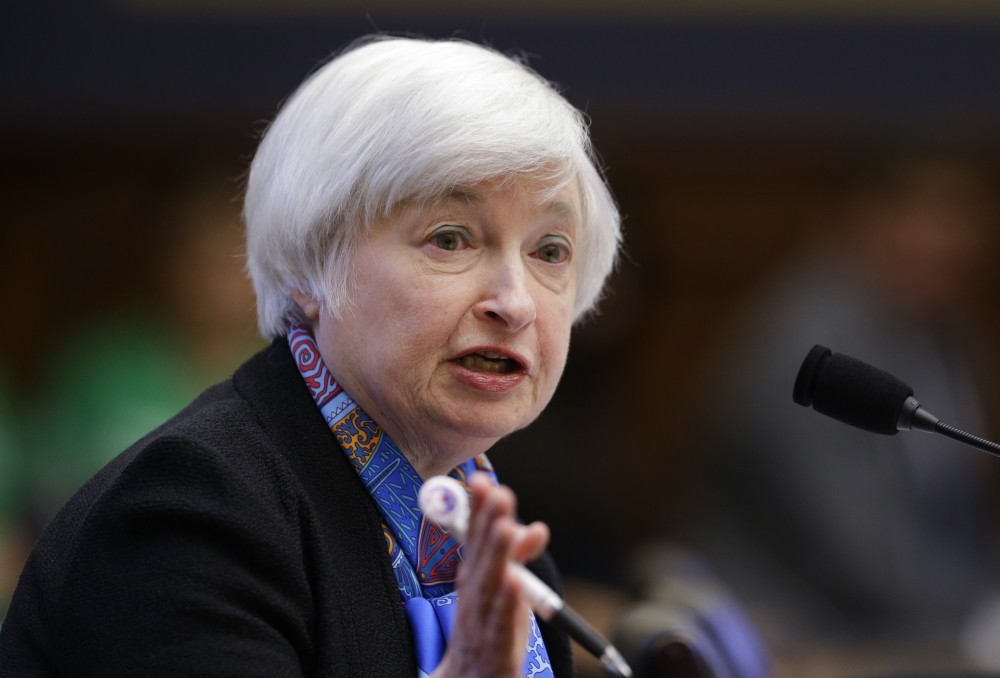 World markets set their eyes on U.S. Federal Reserve Chair Janet Yellen's speech on Friday, which might send a clearer message about a possible interest rate hike in September, strengthening the dollar against the major currencies

World stocks edged lower and the dollar strengthened on Monday on expectations the Federal Reserve will give a signal this week that it is gearing up to raise U.S. interest rates.

An upbeat assessment of the U.S. economy's strength from Fed Vice Chairman Stanley Fischer on Sunday was seen raising the prospect of Fed chair Janet Yellen flagging up a rate rise at a meeting with the world's central bankers on Friday.

The dollar index, which tracks the greenback against a basket of six major currencies, rose 0.2 percent to 94.718, pulling away from a six-week low hit last week after minutes of the Fed's last policy meeting showed rate-setters split on when to hike.

"Fischer didn't necessarily state when the Fed has decided to hike rates, but his remarks seemed to be alluding that a rate hike might be round the corner," said Craig Erlam, a senior market analyst at OANDA.

European stocks fell 0.11 percent, having received a temporary boost in early trading by Syngenta after its proposed takeover by ChemChina was approved by U.S. regulators. Asian stocks closed lower, while U.S. stock futures pointed to a weaker open for Wall Street shares.

Investors are jittery about this week's gathering of central banking Jackson Hole, Wyoming on Thursday, with Yellen due to speak the following day.

Many emerging countries borrow heavily in U.S. dollars meaning an appreciation in the greenback makes it more expensive for them to service their debt. Interest rate futures contracts indicate that the market is pricing in about 50/50 odds of a U.S. rate increase by the end of the year.

Soaring exports of refined products from China also pressured prices, as this was seen as the latest indicator of an ongoing global fuel glut, traders said.

Brent crude futures were trading at $49.94 per barrel at 0712 GMT, down $1.56, or 3.07 percent. Crude futures have risen almost $10 a barrel since early August on speculation that Saudi Arabia and other members of the OPEC will agree next month to a production freeze deal with non-OPEC producers led by Russia.

Gold fell on Monday to its lowest in more than a week as the dollar strengthened, before recovering slightly. Overall, spot gold was down 0.37 percent at $1,336 an ounce, having hit a low of 1,331.35 an ounce at one stage.
RELATED TOPICS