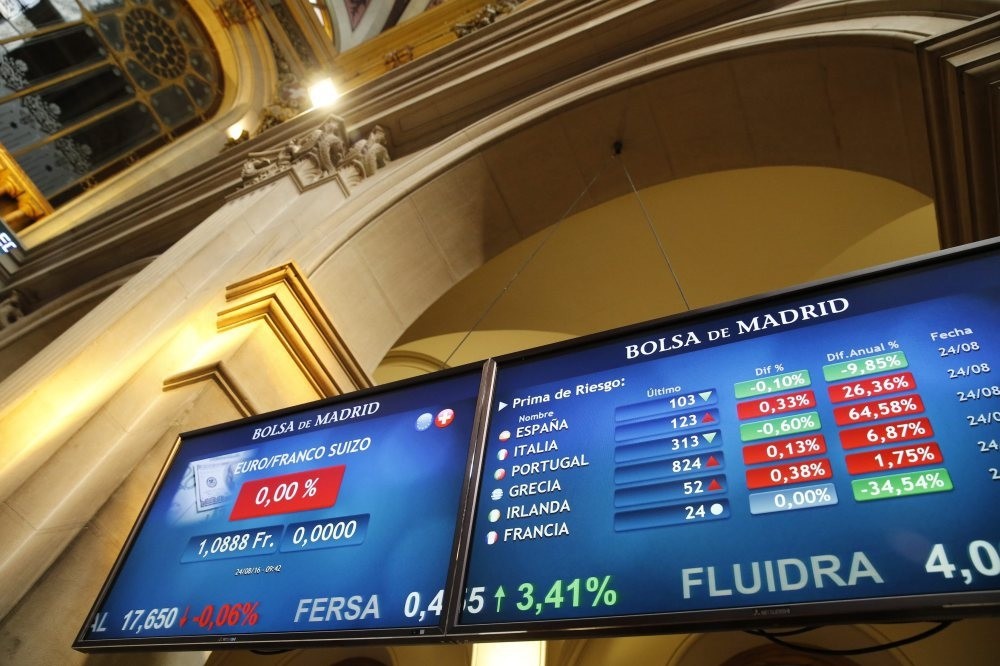 Screens displaying the price of the euro against the Swiss Franc (L) and another showing several European risk premium figures at Madrid's Stock Exchange in Madrid, Spain, on Aug. 24.
by reuters Aug 25, 2016 12:00 am

Enhanced expectations of an interest rate hike by the U.S. Federal Reserve led the dollar to again gain value against major currencies, including the euro. The weakened euro, in turn, supported a rise in European stock prices

European stocks edged toward consecutive daily gains for the first time in three weeks yesterday, drawing support from a weak euro as investors moved to price in a U.S. interest rate rise, boosting the dollar.

The earlier mood was more risk-averse, with the prospect of higher U.S. rates in coming months amid uncertainty about the strength of the global economy dragging Asian stocks lower and flattening the U.S. yield curve.

The difference between 10-year and two-year U.S. Treasury yields fell to its lowest in a month. A flattening curve is often seen as a harbinger of low growth, inflation and rates.

But European stocks recovered initial losses, the U.S. yield curve bounced and U.S. futures turned green to indicate a slightly higher open on Wall Street. The S&P 500 and Nasdaq came within a whisker of all-time highs on Tuesday.

Some observers said that, on a light day for data, investors' nerves may have been soothed by signs that the anticipated economic seizure in Britain - and beyond - from the shock vote in June to leave the European Union had not materialized.

"Brexit? What Brexit?" asked Holger Schmieding, chief economist at Berenberg Bank. "In the rest of the EU, the repercussions of the Brexit vote have been rather mild."

The FTSEuroFirst index of the leading 300 European shares was up 0.5 percent at 1,358 points, having earlier fallen as much as 0.4 percent, and Germany's DAX staged a similar rebound to trade up 0.5 percent.

Britain's FTSE 100 was little changed, capped by weakness in British mining giant Glencore after it reported a fall in underlying profit and lowered its debt target.

l 0.4 percent, with traders cashing in on its rise of more than 14 percent since late June.

The dollar consolidated ahead of a gathering of global central bankers later this week in Jackson Hole, Wyoming, where the focus will be on Friday's keynote speech by Federal Reserve Chair Janet Yellen.

Investors will be hoping for further clues on when the Fed will follow up last December's rate hike with another. Futures markets assign a roughly one-in-five chance it will be September, and 50-50 odds by the end of the year. The dollar was up slightly against the yen at 100.25 yen, holding above the psychologically important 100 level, and the euro fell 0.25 percent to $1.1274.

The dollar index of its value against a trade-weighted basket of currencies rose to 94.67, after falling more than 1 percent last week. "Seemingly in anticipation of a relatively hawkish message from Fed Chair Yellen ...the dollar is making modest gains," RBC Capital Markets analysts wrote in a client note on Wednesday.

"But other markets are more circumspect about the prospect of Yellen signaling a tougher stance on monetary policy," they added.

One is the bond market. The 2-10 U.S. yield curve flattened to 78 basis points earlier yesterday, suggesting investors are lukewarm on what higher borrowing costs will do for the U.S. and world economy.

Last month the curve traded as low as 73 basis points, the flattest since 2007.