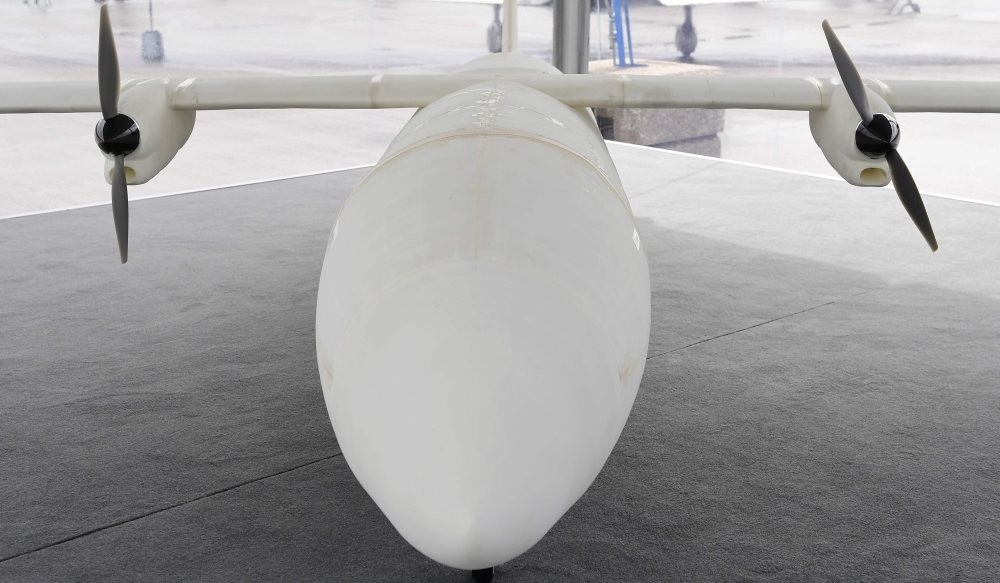 The prototype of the 3D printed THOR aircraft is pictured at the International Aerospace Exhibition (ILA) in Schoenefeld.
by French Press Agency - AFP Aug 26, 2016 12:00 am
New 3D printing technology unveiled this week sharply increases the size of objects that can be produced, offering new possibilities to remake manufacturing in the auto, aerospace and other major industries. One application demonstrated by 3-D printing machinery maker Stratasys would allow airlines to pick made-to-order airplane interiors that could be tweaked with the click of a mouse. By turning the manufacturing plane vertical from the standard horizontal, the "printer" has the potential to create components of unlimited size.

"We're now talking about parts in feet and meters versus centimeters and inches," said Rich Garrity, Americas president for Stratasys. "It's not just a concept."

The advances, by Stratasys, Siemens and others, are beginning to push 3-D printing well into the center of manufacturing from

around the edges. 3-D printing employs sophisticated computer simulations and software to direct "print" objects from powdered, molten and filament materials like nylon, resins, clays, thermoplastics and metals. The technology has not always lived up to sky-high hype, but leading manufacturers remain bullish over its potential to shake up the factory floor.

"It is something that is going to be a game-changer," said Teresa Finchamp, director of operations and quality in Boeing's department for new technologies. Benefits include the ability to reduce weight by substituting plastic compounds for metals. And by making use of a "digital toolbox" and made-to-

order technology, it can also can reduce the need for warehouse space and many conventional manufacturing tools. The ultimate prize is finished items equal in quality to today's goods, but which are cheaper and faster to make.

Siemens argues that 3D printing, along with an increased role of robotics, greater automation and other innovations are creating a "digital factory" that will force a day of reckoning among manufacturers.

"These technologies all evolve so fast," said Andreas Saar, a vice president for additive manufacturing at Siemens.

"We believe if people don't connect, they're going to have a huge problem," he told AFP. Boeing, Siemens and Ford are all corporate partners of Stratasys that joined a press tour of its factory in Eden Prairie near Minneapolis. Stratasys on Wednesday showcased an "infinite build" printer that turns the plane of production on its side, allowing the printing of items of "practically unlimited part size," according to the company.

Also on display was a 3D robotic demonstrator utilizing Siemens software that positions and rotates an item as it is printed. The process, allowing for precise movements on an eight-axis motion system, is suited to produce lightweight components that must also be very strong. During the visit, the device was building a black ribbed dome that could be used on a rocket. Stratasys says the applications of the robotic technology are broad and could also be utilized in the oil and medical equipment industries. Stratasys executives described the innovations as "step" changes but would not comment on a timeframe for commercializing the technology. Even if the Stratasys innovations can be made commercial quickly, there are other barriers to more extensive use of 3-D printing. A key challenge for the auto industry, a relatively high-volume sector, will be matching the efficiency of conventional manufacturing, experts say.

Ellen Lee, who is in charge of bringing 3D printing into the manufacturing process at Ford, also said the technology does not yet make use of materials robust and durable enough for the most important car parts.

Boeing's Finchamp said the aerospace giant planned to use larger 3D parts on commercial airplane interiors as soon as this year. But questions about material strength clouds the outlook for use on larger parts.

"We have to be very cautious," she told AFP. "We're very very conservative with how to get things onto planes."
RELATED TOPICS