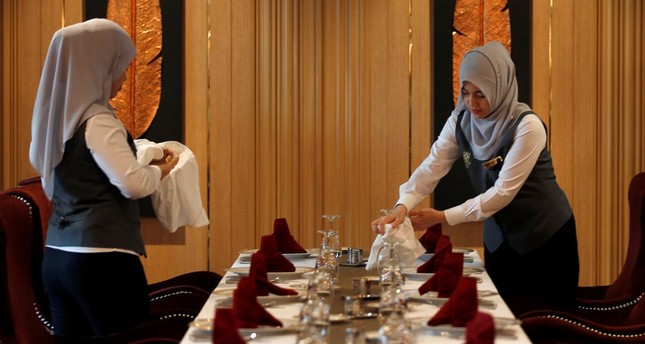 Predominately Buddhist Thailand has opened its first halal hotel as hopes to attract more Muslim visitors and boost one of the few bright spots in its economy. Nearly 30 million foreign tourists came to Thailand last year but only about 658,000 were from the Middle East, according to industry data. The four-star Al Meroz hotel in Bangkok, which opened in November, hopes to play its part in changing that, and to cash in.

"There are 1.6 billion Muslims in the world. It's a huge market," said the hotel's general manager, Sanya Saengboon. "Just one percent of that market is enough for us to thrive."

The Al Meroz, which boasts mosque-like architecture, has two prayer rooms and three halal dining halls. Rooms cost from 4,000 baht all the way up to 50,000 baht ($116 to $1,445) a night, said Sanya. A guest at the hotel, Aamir Fazal, 28, a security officer from Australia, said access to a halal hotel was a comfort to Muslim travelers in Thailand where halal food can be hard to find.

"It's a really nice experience. It's the first halal hotel here and I find that amazing," said Fazal. Eager to tap into a growing Muslim tourist market, Thailand launched a mobile application last year which helps tourists search for halal eateries and Muslim-friendly attractions. Parts of Thailand's south, near the border with Muslim Malaysia, are majority Muslim.

Many Malaysians pop over the border for short visits but a low-level separatist insurgency in the far south, that has included bomb attacks in border towns frequented by Malaysian tourists, has dented business there. A series of bomb attacks in more mainstream tourist towns south of Bangkok this month, in which four people were killed and dozens wounded, has led to fears the insurgency is spreading. Thailand saw a 10 percent increase in arrivals from the Middle East in 2015 compared with 2014, data from the Department of Tourism showed.