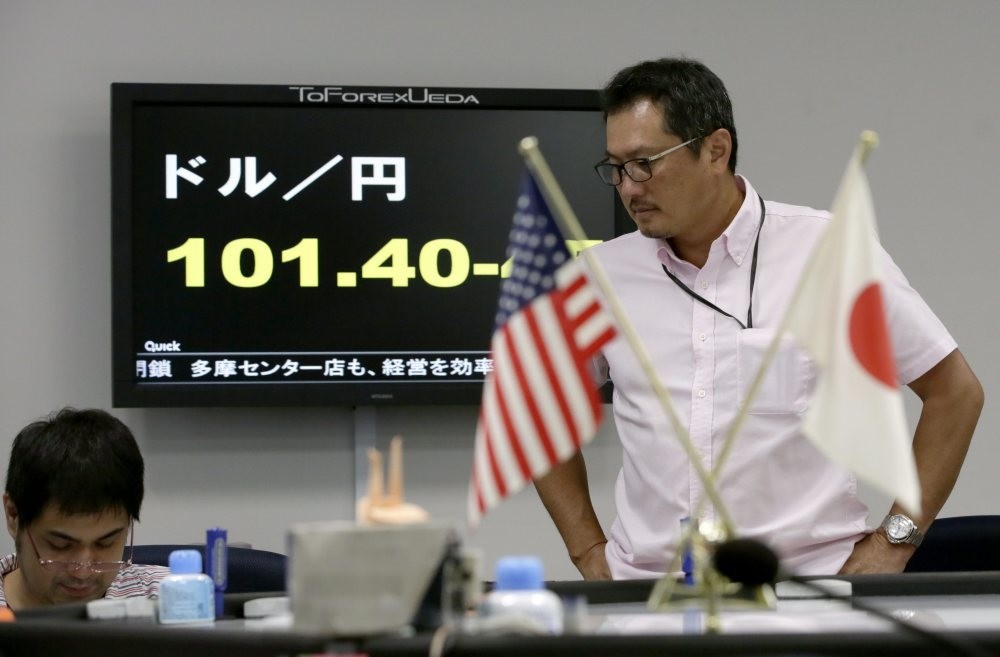 Supported by curbed expectations for an interest rate hike this month due to weak U.S. data, the dollar saw a one-week low against the yen. Despite this, facing sharp falls in industry data, sterling and the euro fell against the dollar

The dollar fell to its lowest in more than a week against the yen Tuesday as subdued U.S. data made an interest rate increase this month unlikely and drove investors to cut favorable bets in the greenback.

In Europe, sterling fell for the first time in six days against the dollar hurt by weak factory data. It was 0.5 percent lower at $1.3375 with the focus on Bank of England chief Mark Carney's testimony to lawmakers. His appearance comes after a slew of robust data in the past week saw fears of a recession in the near term abate.

The dollar was down 0.45 percent at 101.50 yen after dipping as low as 101.20 earlier, its lowest since Aug. 26--when Federal Reserve chair Janet Yellen gave an upbeat speech on the economy that revived bets of a rate hike in the near term.

Since then, the dollar has been struggling to make headway and tumbled more than 1 percent against the yen on Tuesday.

"Since the Jackson Hole speech, the implied probability of Fed's rate hike for its September meeting fell from 42 percent to 24 percent and the 2-year Treasury yield dipped by around 10 basis points," said Petr Krpata, currency strategist at ING.

"Clearly, this is a challenging environment for the dollar."

The Fed's labour-market conditions index also fell in August, slipping back into negative territory after a positive reading in July.

Nonetheless, San Francisco Fed President John Williams said in prepared remarks late on Thursday that the economy was in "good shape" and that it "makes sense to get back to a pace of gradual rate increases, preferably sooner rather than later." Williams did not directly cite Thursday's data.

Despite the upbeat rhetoric from the Fed, Morgan Stanley analysts do not expect the Fed to hike at all this year as the U.S. economy is expected to slow down from here.

"For the rates market to adjust accordingly, it may require the Fed to change its language, which has not happened yet as Williams illustrated overnight," Morgan Stanley strategists said in note, adding once the Fed adjusts its communication, the dollar would fall against the euro and the yen at a faster pace.

Also helping the yen was the Sankei newspaper's report saying Bank of Japan policymakers were divided ahead of the central bank's Sept. 20-21 meeting, at which BOJ Governor Haruhiko Kuroda has said the board will conduct a comprehensive assessment of its massive stimulus program.

Despite the dollar's weakness, the euro underperformed, hurt by data that showed German industrial production post its steepest fall in nearly two years in July.

The European Central Bank holds its next Governing Council meeting today, where it is expected to keep policy steady.

Meanwhile, Sweden's crown rose to a day's high against the euro of 9.50 crowns per euro amid relief that the Riksbank stood pat on rates, as expected. The crown had fallen to a one-year low last week after a slew of weak economic data.
Last Update: Sep 08, 2016 1:07 am
RELATED TOPICS