Rough construction of third airport to be finished by Jan 30 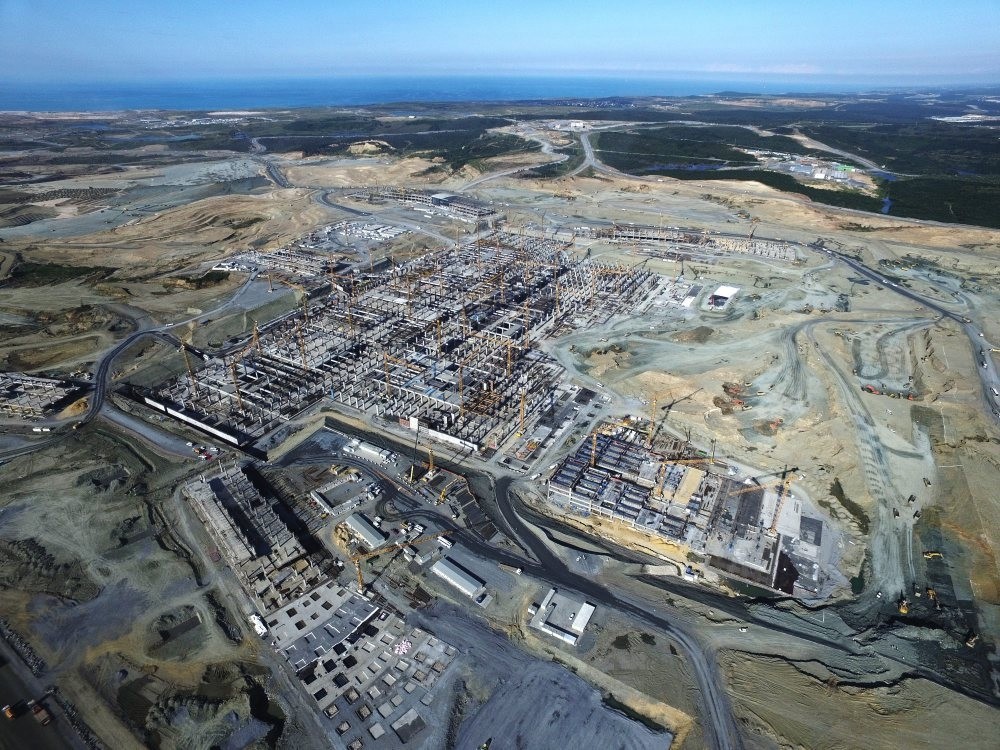 While 30 percent of Istanbul's third airport has been constructed, the rough construction of the megaproject is set to be finalized on Jan 30. Also, works for the opening of the first phase on Feb. 26, 2018 have been continuously going on

Some 30 percent of the construction work on Istanbul's third airport, also known as Istanbul New Airport, has been completed, and the rough construction is scheduled to be finalized on Jan. 30, 2017. Istanbul Grand Airport (İGA) CEO Yusuf Akçayoğlu said the first phase of the airport will come into service on Feb. 26, 2018, adding that the construction work is continuing at full speed.

According to Akçayoğlu, the first column of the steel roof has been installed. Nearly 3,000 construction vehicles, including 2,200 trucks, are deployed in the construction site and they operate continuously throughout the day and night. However, the performance of the vehicle's decline during the carrying out of superstructure work involving the phases of the rough construction process.

Akçayoğlu said, "If we can increase the performance of our labor force in the superstructure to 60 percent during daytime, it will be a great success above the general performance standards of 20 percent to 30 percent."

Currently, the number of staff working at the construction site has reached 18,250. The foundations of the new traffic tower will be laid in October.

The total budget of the project's first phase is about 6 billion euros and is planned to be completed by February 2018, and 25 percent of this budget will be financed by the consortium's equity capital. The four phases of the project will be financed by bank credits totaling 80 percent and equity capital totaling 20 percent. Moreover, it is not expected to be a burden on the Treasury.

The airport will have 165 passenger jetways, four terminals connected with a railway system, three maintenance buildings, eight air traffic control towers, six runways, 16 taxiways, a 6.5 million-square-meter airport hangar with a capacity of 500 airplanes, an approximately 70,000 vehicle capacity parking area - touted as the largest airport parking lot in Europe - a clinic, fire department, hotels, a convention center and recycling and waste disposal plants. The airport will also host 150 airlines. The airport will be connected to the Istanbul metro, and multi-lane highways will be built to facilitate access. The area where the airport is being built was chosen after the ecological balance, wind data and the natural and artificial obstacles of the region were taken into consideration.
Last Update: Sep 15, 2016 12:09 pm
RELATED TOPICS