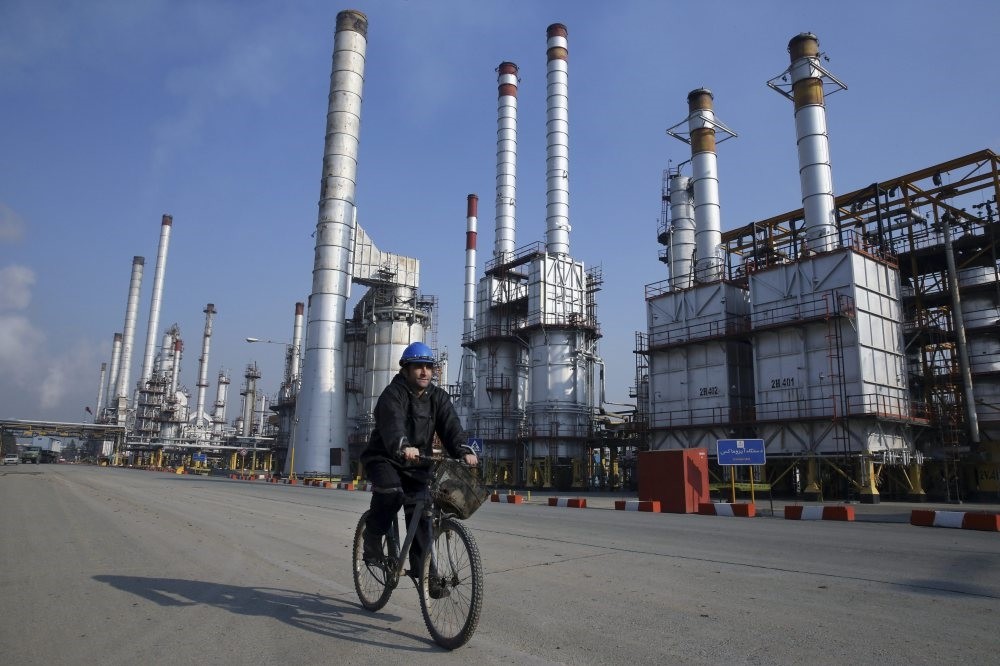 An Iranian oil worker rides his bicycle at the Tehran oil refinery, south of the capital Tehran.
by Feb 01, 2017 12:00 am
A row over U.S. visa bans may further weaken Iranian President Hassan Rouhani's efforts to attract foreign investors to Iran, particularly if it slows the implementation of deals for Western aircraft, officials and analysts said. The deals for 80 Boeing jets and 100 from Europe's Airbus struck last year are seen by Western investors as a crucial test as they seek business in Iran in the wake of the nuclear deal that led to the lifting of most sanctions. People involved in the airline deals say it is too early to assess the impact of the U.S. visa ban but worry that hardening rhetoric in Tehran and Washington can only add to a list of complications that could slow, if not endanger, the jet sales.

While Airbus planes come from Europe, the administration of U.S. President Donald Trump can veto the sale of all the planes to Iran because of the widespread use of U.S. parts in the aircraft which need U.S. export licences. The visa ban could also prolong a hiatus in talks about financing deliveries of jets, with European and Chinese banks reluctant to put up money to back Iranian jet purchases for fear of a backlash against their U.S. operations.

"It will make people more nervous, more risk-averse, more inclined to wait and see," said a senior Western financier, who asked not to be named.

Iranian officials say that even before Trump imposed restrictions on travel to the United States from seven mainly Muslim countries, concerns about what the new U.S. president might do had already put the brakes on post-sanctions business. During his election campaign, Trump criticised the nuclear accord six major powers struck with Iran and his victory in November increased uncertainty around Iran's investment drive.

"The process has been very slow ... foreign investors were very interested to work in Iran, but since Trump's election the process has almost stopped. Investors are worried about possible U.S. punishments if they work with Iran," a senior economy ministry official told Reuters. Final decisions on whether the plane deals go ahead may well lie with Trump and Iran's Supreme Leader Ayatollah Ali Khamenei, the ultimate broker in the country's faction-ridden politics who has the last say on key matters. Since taking office this month, Trump has largely ignored the Iranian jet deals in public, even as he lambasted U.S. aerospace firms including Boeing about other projects. For now, at least, Boeing appears comfortable that Trump won't automatically block its deal, though questions also remain over further approvals from Iran, two industry sources said. Still, any long-term U.S. travel curbs could also undermine the case for long-distance jets capable of linking Tehran with expatriate communities in cities such as Los Angeles. Boeing plans to start delivering its large 777 jets in 2018.