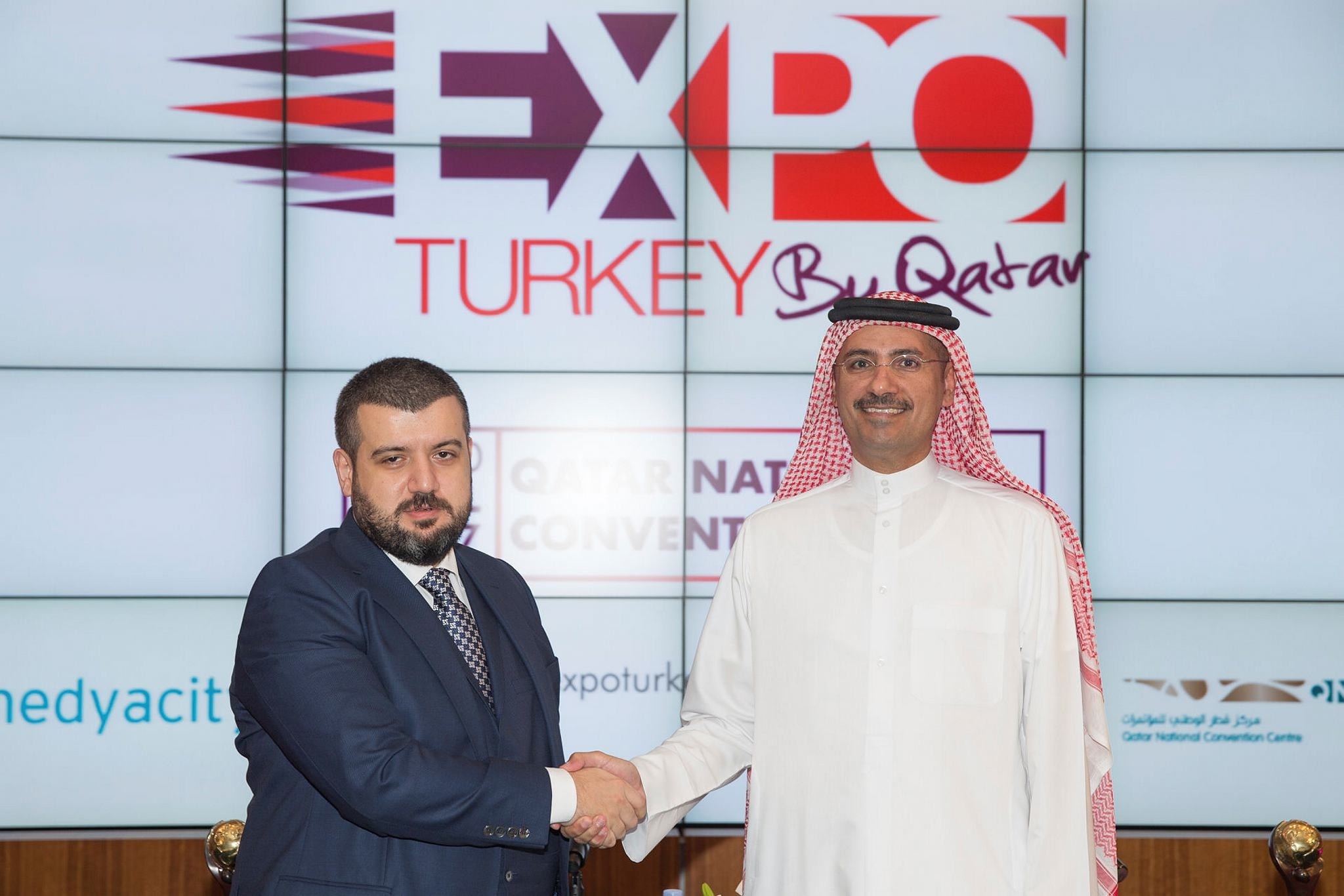 Abdul Aziz Al Emadi, CEO of QNCC and co-organizer of the event (R), and Hakan Kurt, chairman of Medyacity
by Mehmet Çelik Feb 02, 2017 12:00 am
Turkish and Qatari businesses will come together at "Expo Turkey by Qatar" in the Qatari capital Doha, April 18-20, to bolster economic and trade-related bilateral relations between the two countries.

The expo, which is expected to further enhance Turkish-Qatari relations, will host businesses from eight different sectors, including construction, food and beverage and furniture, with the participation of 300 companies and about 5,000 businessmen.

"In recent years, we have witnessed constant growth in the relationship between Qatar and Turkey, both culturally, as well as economically. We have seen our ties grow stronger, our interests align and our vision come together. As a result of this evolution, we now work with Turkey in multiple sectors," said Al Emadi.

The event aims to bring together businessmen from the two countries to enhance Turkish-Qatari strategic economic partnership through trade and raise the volume of bilateral trade to $1.5 billion, currently about $750 million per year.

"This exhibition between Turkey and Qatar is not a simple exhibition to buy and sell goods. By considering the economic indicators of Qatar and the know-how skills of Turkey, research was conducted to determine which steps to take between the business worlds of the two countries, and business development plans are made accordingly by us," said Kurt.

Turkish construction firms have been particularly involved in the construction of major projects in Doha, Qatar, including the city's symbolic buildings: the QNCC, Hamad International Airport and the Islamic Arts Museum.

Al Emadi added that the exhibition's award-winning location, which cost $2.8 billion to build, would ensure that businesses would meet each other in a space that will meet their needs effectively. "With this event utilizing over 40,000 square meters within the QNCC, we believe it will provide ample opportunity for all those concerned. Our priority is to ensure business gets done in the most effective and efficient way possible, which is why the QNCC will dedicate its 52 meeting rooms so that peers from Turkey, Qatar or other states in the region can set meetings and discuss potential opportunities," he added.

Kurt added that in addition to trade partnership between businesses from Qatar and Turkey, the two countries have the opportunity to combine their strengths and establish business deals with third countries in the region or globally.

Kurt called on Qatari businesses to invest in Turkey as it "offers its middle-to-high technological industry and its real estate property, which increases approximately 20 percent in value every year." He added that Qatar is also full of investment opportunities for Turkish businesses, saying it is: "The most important trading hub for Turkish businesses in the world in every industrial sector," given Qatar's key location in the Middle East and its trade relations with the African countries.

Al Aziz noted that the event would launch an effective economic zone that will ultimately positively affect other areas in the region, including knowledge, trade and political and cultural areas.

With a population of 2.3 million, Qatar has a gross domestic product (GDP) of $165 billion, one of the highest GDPs per capita. Qatar will also host the FIFA World Cup Organization in 2022; it has allocated about $170 billion for the construction of facilities and infrastructure.

Expo Turkey by Qatar is expected to host roughly 250 companies from Turkey in the real estate, furniture, food and beverage, IT, accessories and jewelry and medical technology sectors and attract about 7,000 visitors from the region and other parts of the world.
RELATED TOPICS