Coca-Cola trying to slim down business, not just drinks 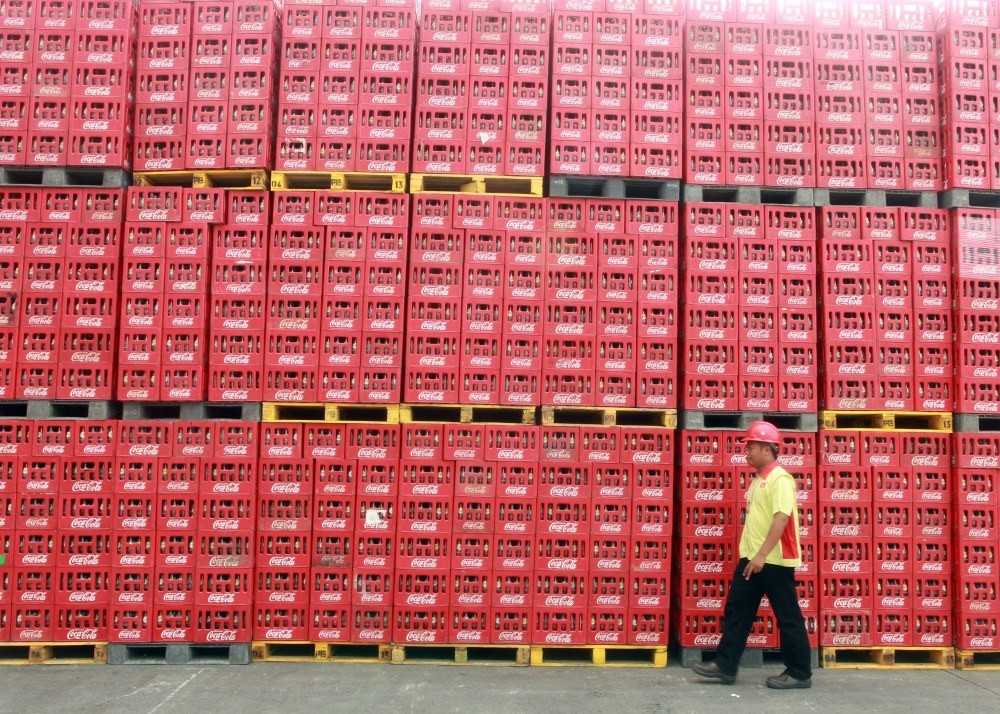 An Indonesian worker walks past crates at the Coca Cola Amatil plant in Cibitung, Indonesia.
by Associated Press Feb 11, 2017 12:00 am
Coke is trying to slim down its business, not just its sodas. The Atlanta-based company said its profit fell 55 percent as global sales volume dipped and it booked charges related to getting out of the manufacturing and distribution of its drinks. Coca-Cola Co. has been selling those operations back to independent bottlers around the country and plans to complete the process by the end of this year. That frees up the company to focus on the more profitable work of burnishing its brand, while selling concentrates to bottlers.;

"Basically, you're becoming a branding company and selling a little syrup on the side," said Ali Dibadj, a Bernstein analyst.

The structural shift comes as the world's biggest beverage maker also looks change the type of drinks it offers amid competitive pressure and changing tastes. As it faces criticism for marketing sugary drinks, the company has said that it is working to adapt its offerings and push more lower-calorie beverages. That dovetails with shifting trends, including the growth of bottled water.

Habits are tough to change, however. Although Americans have been cutting back on traditional sodas for years, Coke and Pepsi still rely on their namesake drinks for huge portions of their revenues. For 2016, Coke said sales volume of its carbonated beverages in North America was flat, as growth in Sprite, Fanta and energy drinks offset a decline in Diet Coke. Non-carbonated drinks rose 3 percent, boosted by vitaminwater and its new milk drink.

Another way Coke is trying to drive profitability is through different types of packaging for sodas, not just 12-ounce cans and 20-ounce bottles. Coca-Cola has been marketing mini-cans and aluminum bottles, which it says fetch more money per ounce. In the meantime, the company has also been refranchising bottling operations overseas.

The structure is comparable to companies such as McDonald's Corp. and Yum Brands Inc., which make most their money from taking a cut of the sales at restaurants run by franchisees. Those two fast-food companies are also working on refranchising more of their restaurants, which reduces risk and increases profitability.

There are benefits to controlling the bottling systems for beverage makers, such as the ability to get new products on the shelf quicker. That's the type of advantage PepsiCo Inc. has cited for holding onto its bottling system in North America.

Duane Stanford, publisher of Beverage Digest, said Coke saw the past acquisition of its bottlers as a way to get them more operating more efficiently. Until a few years ago, he noted, the company said it would keep the manufacturing portion of the business in the U.S. while refranchising distribution responsibilities. Now it plans to sell off both.

Coca-Cola earned $550 million, or 13 cents per share Adjusted for one-time costs and asset impairment costs, it earned 37 cents per share. Total revenue dropped to $9.41 billion from $10 billion, dragged down partly by a strong dollar, acquisitions and divestitures. For the current year, the company expects earnings to fall below 2016's earnings of $1.91 per share.
RELATED TOPICS