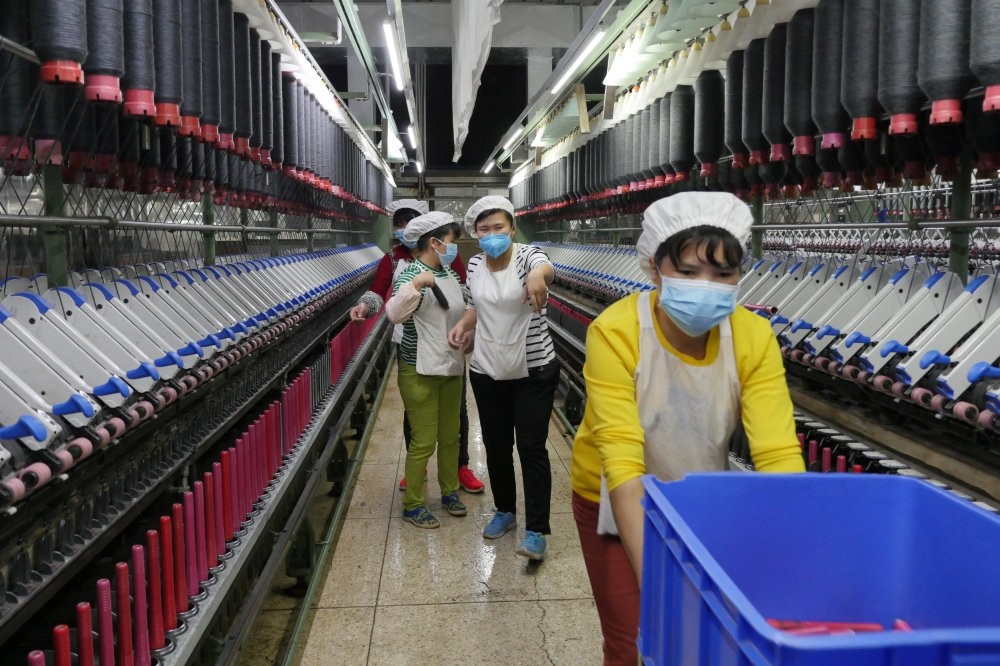 The increasing cost of doing business in China work against Chinese textile industry but earns benefits for the Italian suppliers.
by Feb 15, 2017 12:00 am

Increasing wages in China and the rising costs of shipment, energy and raw material are weakening China's advantage in the international textile market while high-end customers are heading to Western suppliers

International textiles buyers are increasingly switching away from China, and back to Western suppliers, as rising labor, raw material and energy costs make the world's dominant producer more expensive.

In Biella, a small town in the foothills of the Alps at the heart of northern Italy's wool industry, factory owners say a narrowing price difference with China and demands for nimbler production nearer home are winning back higher-end customers.

In the office of his family business, Alessandro Barberis Canonico recounts how one high-profile European client called him recently to say he was giving up on China because of rising costs there and the increased demand for quality - and would need help from Biella for a big collection.

"He had tried his luck going abroad; things did not go well, so he's now back," Barberis Canonico said.

For sure, China remains a world leader in textiles: employing over 4.6 million people, contributing a tenth of GDP and with exports, including apparel, of $284 billion in 2015, according to data from China's National Bureau of Statistics, the Ministry of Industry and Information Technology, and the China Chamber of Commerce for Import and Export of Textile and Apparel.

But wages there have been rising at an annual compound growth rate of more than 12 percent, outpacing the economy, and are simply no longer cheap enough to compete just on price.

The government's five-year plan for textiles, released in September, acknowledged that higher costs are weakening its international advantage, and it faces a 'double whammy' from developed countries - like Italy - with better technology and developing countries with lower wages.

The labour cost gap between Italian and Chinese yarn narrowed by around 30 percent between 2008 and 2016, to $0.57 per kg from $0.82/kg, according to International Textile Manufacturers Federation (ITMF) data.

The hourly wage for a Chinese weaver last year was $3.52, according to the ITMF, up 25 percent since 2014, though still a fraction of the more than $27.25 paid in Italy, an increase of 9 percent over the same period.

"When China's wages are not that low, the process of shipping materials so far to China and then shipping products back to Europe becomes a lot less attractive," said Shiu Lo Mo-ching, Chairman of Hong Kong General Chamber of Textiles Ltd and CEO of textile manufacturer Wah Fung Group.

"They'd rather take the production back to Europe. This trend has been very obvious."

That proximity is also an advantage at a time when Western clothing brands are under pressure to offer more collections, and customers increasingly want customised looks. Their suppliers need to be closer, and faster.

"In China ... their supply chain is not close, and is scattered, giving (Italy) a competitive advantage," said Ercole Botto Poala, CEO of Italian textile producer Reda.

For buyers, quality and transparency are also key.

"Before, given (brands) were paying much less, they turned a blind eye to quality," said Giovanni Germanetti, director general of Italian yarn and textile producer Tollegno 1900, one of several producers who told Reuters that clients were returning for what he described was better value for money.

While suppliers were reluctant to name specific brands they sell to, so as to protect business confidentiality, several international apparel firms are switching to Italian wool fabrics so they can name the mill they source from on labels to differentiate from rivals, producers said.

More than 9,000 kms (5,600 miles) from Biella, in the bustle of the biennial Canton Trade Fair, some buyers said they were moving away from China.

"We already buy 60 percent less from China compared to two years ago," said Olesia Pryimak, who attended the trade fair late last year to source material for her plus-sized fashion firm Opri in Ukraine. She said her company is turning increasingly to Turkey for fabrics, because of quality, price and proximity to Europe.

Many of the producers and buyers interviewed said it was too soon for data to show the flow out of China.

China's textile exports to the European Union grew a modest 1.4 percent in the first ten months of last year, but dropped 4.1 percent in October, according to Chinese data.

In Zhuhai in China's industrial southern belt, middle-aged workers load bundles of white wool for washing and dyeing at a spacious, well-lit factory owned by Hong Kong-based Novetex Holdings, a supplier of wool and cashmere yarn to international brands including Burberry and Max Mara.

The company employs about 1,100 workers during peak season, but rising wages mean it is now investing in more automation, and will cut two-thirds of its workforce in two years.

"The overall cake is smaller. Many agents and smaller factories have shut down," said director and CEO Milton Chan.