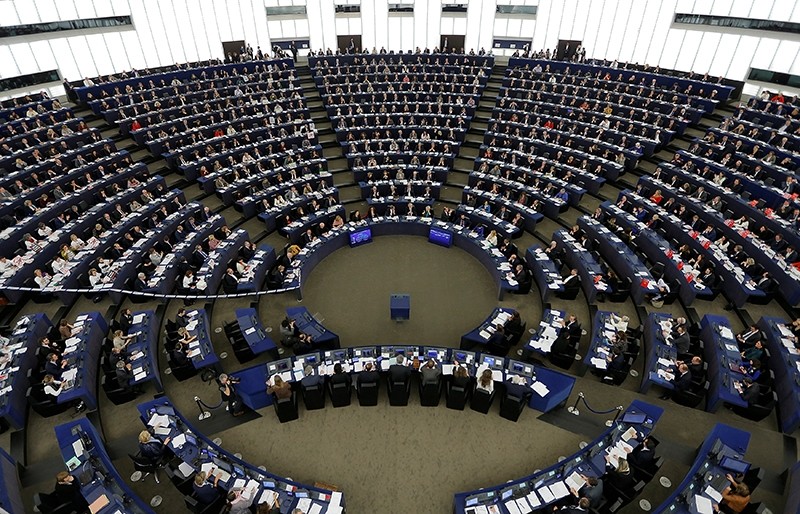 Members of the European Parliament take part in a voting session on the Comprehensive Economic Trade Agreement (CETA) between the EU and Canada (Reuters Photo)
by Feb 15, 2017 12:00 am

The European Parliament backed a contested EU-Canada free trade deal on Wednesday, facing down protests by activists and Donald Trump-inspired calls for protectionism.

Members of European Parliament (MEP) meeting in Strasbourg, France, approved the pact with 408 votes in favor, 254 against and 33 abstentions.

Approval by the parliament allows the provisional implementation of the Comprehensive Economic and Trade Agreement as early as next month.

EU states and Canada formally signed the deal in October after seven years of tough talks, overcoming last-minute resistance from a small Belgian region that blocked its national government from approving the accord.

Protests marked the vote, with about 700 people marching outside parliament to voice their opposition to the deal.

Anti-globalization activists dressed in surgical masks dramatically blocked entrance to the parliament building, before being dragged off by riot police.

"Saying yes to CETA is a trampling of the people," said a banner.

EU leaders see the deal as a victory for an imperiled global trade system that is under threat from US President Donald Trump who opposes international trade deals.

Opponents to the accord, which is known as CETA, slam the deal as a danger to health, democracy and the rule of law.

"CETA is the best trade agreement the EU has ever concluded. It will bring Canada and Europe even closer together," said German MEP Manfred Weber, the head of the conservative EPP group, the parliament's biggest bloc.

Some of the more controversial aspects, including a much-derided investor court system, still require ratification by EU member states, which could take years.

The EU is very ambitious about the deal, calling it Europe's most modern ever, and saying it will become a template for later deals, including with post-Brexit Britain.

CETA will remove 99 percent of non-farm customs duties between the two sides, a big win for exporters on both sides of the Atlantic.

And unlike classic trade deals, CETA harmonizes regulations on matters such as health and the environment, a major concern for activists.

A major flash point for opponents is the proposal to set up special courts to settle disputes between investors and national authorities that is central to the deal.

Opponents believe this provision hands too much power to multinationals that will use powerful lawyers to undermine national regulation.

"Multinationals will be able to attack governments in a privatized court system," said France's far-right presidential candidate and MEP Marine Le Pen, who voted against CETA.

But the deal's EU negotiator, Commissioner Cecilia Malmstroem, told MEPs that "nothing in this agreement undermines a government's right to regulate in the public interest".

The vote comes at a particularly sensitive time for global trade matters, with Britain poised to leave the European Union and new US president Trump rejecting an Asia-Pacific trade deal.

Trump is also widely expected to drop a similar proposed deal with the EU known as the Transatlantic Trade and Investment Partnership or TTIP.

Trudeau met with Trump on Monday in Washington.

Trump had vowed to put "America first" and rip up the North America Free Trade Agreement with Canada and Mexico, but significantly toned down that rhetoric after meeting Trudeau.